The egret chicks at the nesting colony are growing. They’re doing some neat stuff as they grow, like practicing walking very carefully along branches. 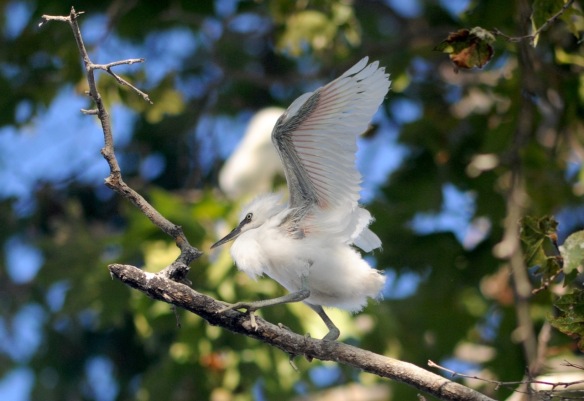 But they are also getting up to a lot of nonsense.

Siblings! No fighting, no biting!

END_OF_DOCUMENT_TOKEN_TO_BE_REPLACED

Hummingbirds wear a public image of fragile, ethereal beauty: tiny jewels whirring through the air, occasionally pausing to drink daintily from a flower. Their unusual appearance supports this: the iridescent feathers, the long dainty bill, the near-invisible feet all make them seem quite apart from the everyday world of animals who don’t shimmer in the sun and do have feet.

But hummingbirds, like all birds, evolved from dinosaurs. Hidden under that glimmering exterior is a tiny, fierce raptorial dinosaur.

END_OF_DOCUMENT_TOKEN_TO_BE_REPLACED

The birds are having babies, those babies are learning to fly, and they are flying into our nets at the banding station. They’re not really babies by this point: most of them are independent of their parents. They may have been out of the nest for a month or more, and are technically “juveniles” or “immatures.”

At the banding station we collect data on each bird we catch, including that bird’s age. It’s important to record the age if we can, because the more accurate we are with the age the first time we catch a bird, the more accurate we can be later. If we caught a bird in 2014 and recorded that it was a juvenile, then when we catch it in 2016, we’ll know it’s exactly 2 years old. If we didn’t bother to age it back in 2014, then in 2016 we would only know that it was at least 2. That maybe seems like a small distinction, but the lifespans of wild birds are still an area in which we lack a lot of information, so knowing exact ages is valuable.

How do you tell if a bird is a juvenile or an adult? In some species, the juveniles are dramatically different colors than the adults. Juvenile juncos, brown and streaky, look distinct from adults even from a distance—until they molt, at least. But the differences can be a lot more subtle.

Here is a Common Yellowthroat from the banding station:

How old is it?

END_OF_DOCUMENT_TOKEN_TO_BE_REPLACED

I’ve previously discussed how scientists are interested in pigeons’ ability to perceive art. A New York City artist has taken this to its logical conclusion and created an art installation for pigeons.

END_OF_DOCUMENT_TOKEN_TO_BE_REPLACED

Egrets are beautiful, especially in their breeding plumage, when they sport long curved plumes and dramatically colored faces. 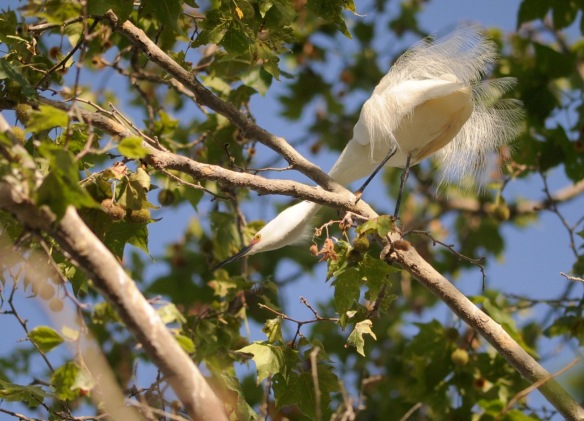 Snowy Egret with similar plumes and a red face.

Those breeding plumes are so beautiful that demand for them—for decorating women’s hats—almost drove egrets to extinction, and concern for the heavily persecuted egrets is what gave rise to the bird conservation movement in the early 20th century.

Egrets earn those luscious plumes. Before they get to be adults in breeding plumage, egrets must survive a cutthroat childhood in considerably less impressive dress. 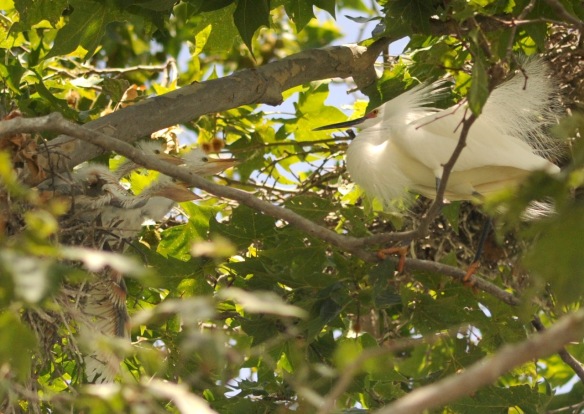 END_OF_DOCUMENT_TOKEN_TO_BE_REPLACED

You may see ads on this blog. These are placed by Wordpress to cover the cost of this (free) blog. I do not get any money from these ads, and I do not get to choose which ads you see. I wish there weren't ads too!