As fledglings undergo their fall molt (the Prebasic I molt), their appearance changes from obvious-youngster to apparent-adult. In the middle of that transition, they look a little… wild. It’s a strange and fleeting look, here-today-and-gone-in-two-weeks. We’ve caught enough molting fledglings that I’ve been able to put together a series of photos showing the transition. 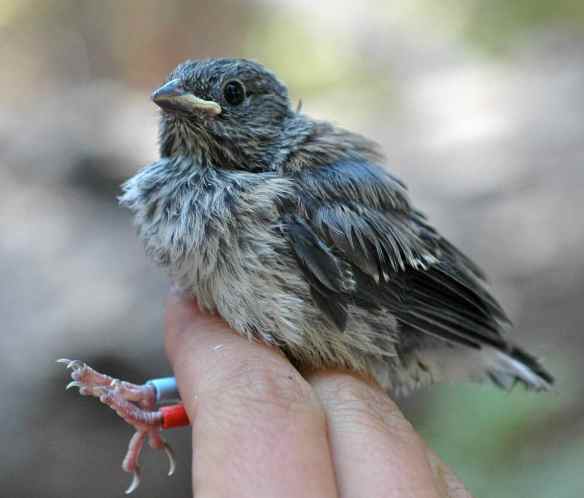 As they get older, the yellow gape shrinks. 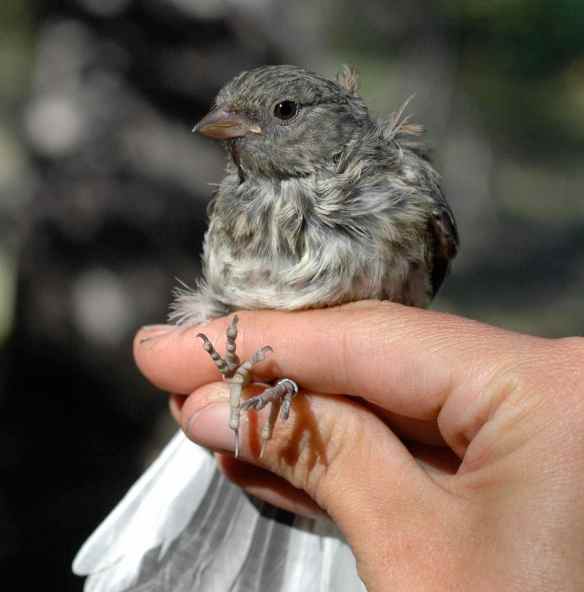 Older fledgling KALI. Note the remnant of yellow gape at the edge of the bill. 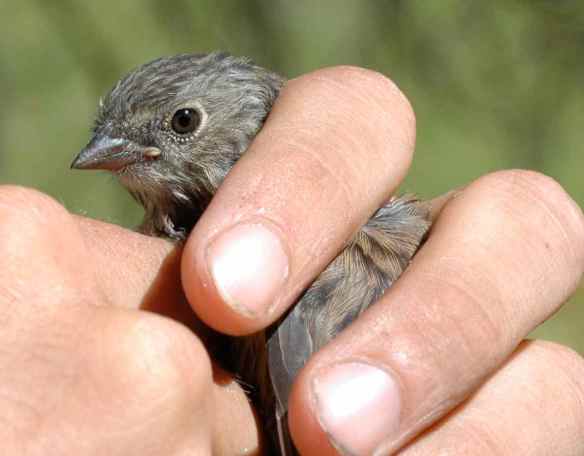 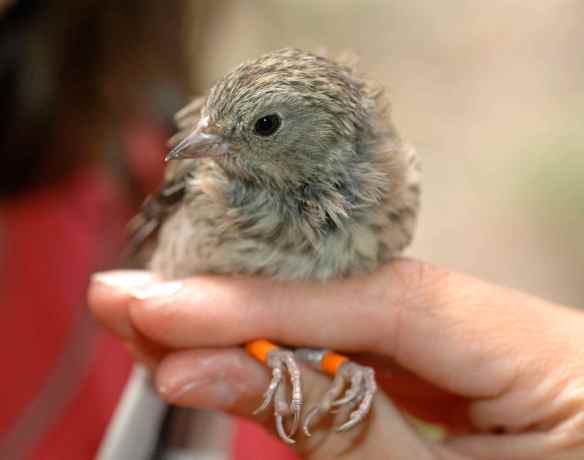 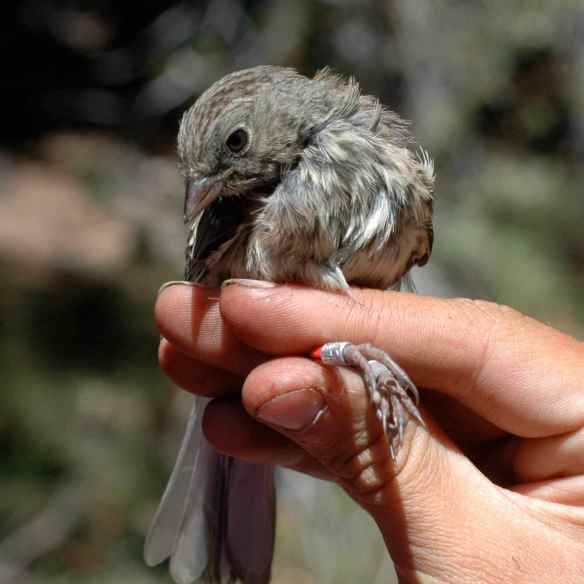 They molt their body feathers first, acquiring reddish backs and dark wings, but retaining the streaky head instead of an adult’s dark hood. 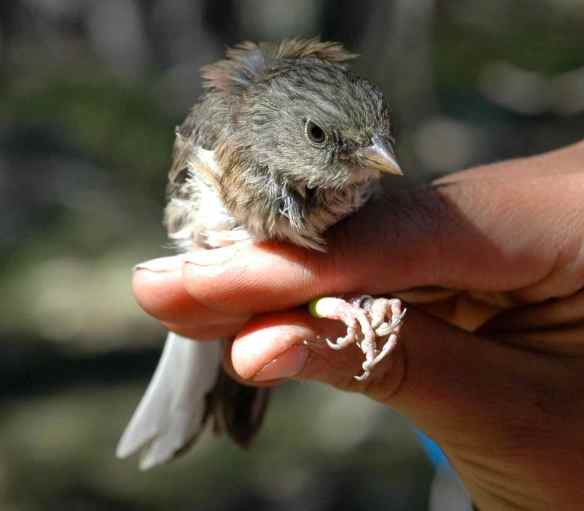 SALI: streaky head but reddish feathers peaking over her shoulders 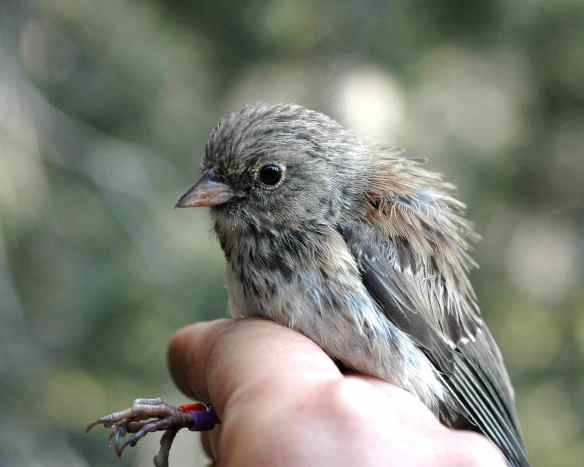 When the molt starts on the hood, it generally begins near the bill. 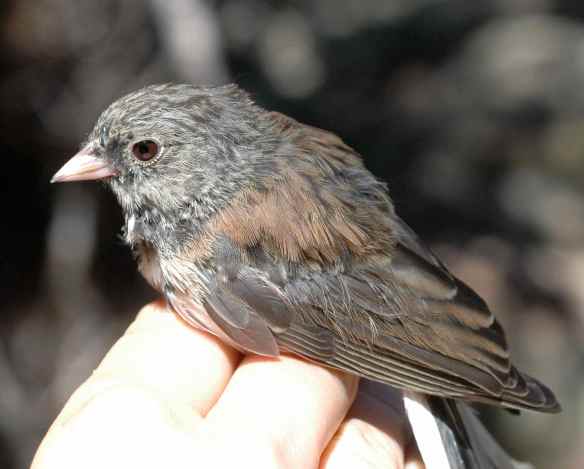 AGGI. His back looks adult, and his bill is pink. His head is mostly streaky – but notice the dark patch by the base of his bill. 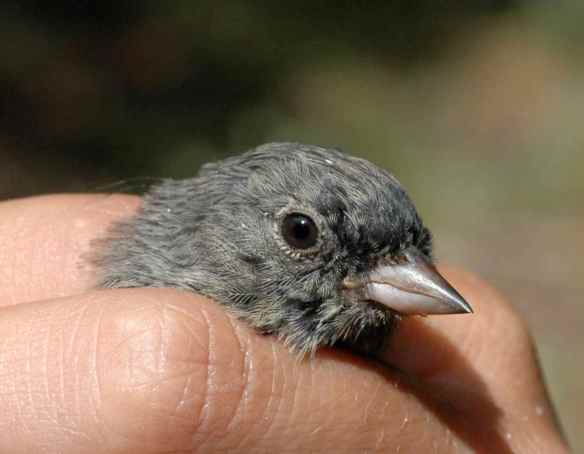 LEAR, dark feathers coming in by his bill. 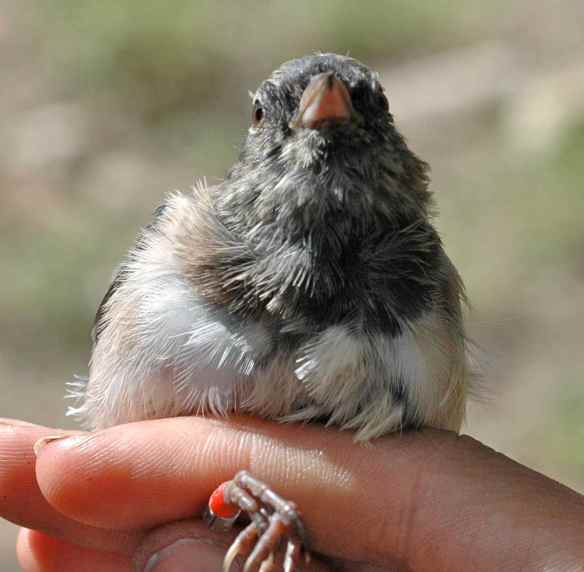 LEAR’s breast is the white-with-buffy-sides of an adult, but the underside of his throat is still streaky.

Sometimes we catch fledglings repeatedly and we can see how their molt has progressed over time. 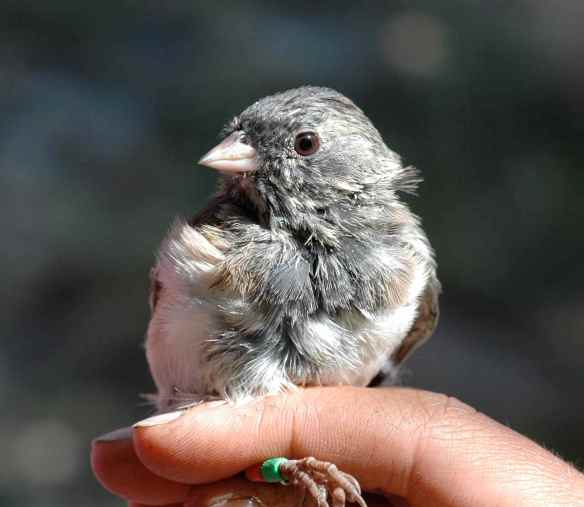 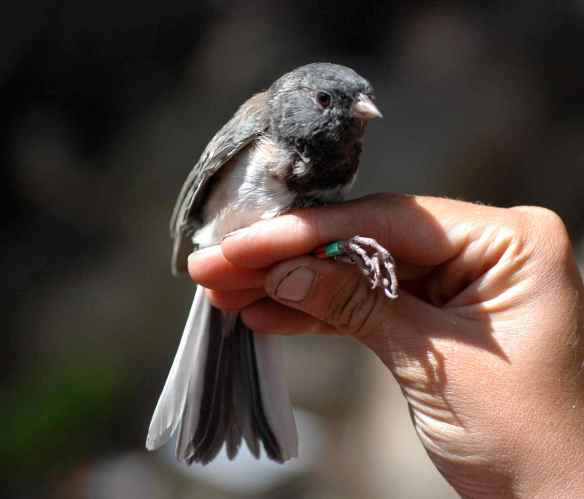 ARRG some days later. His hood is darker. 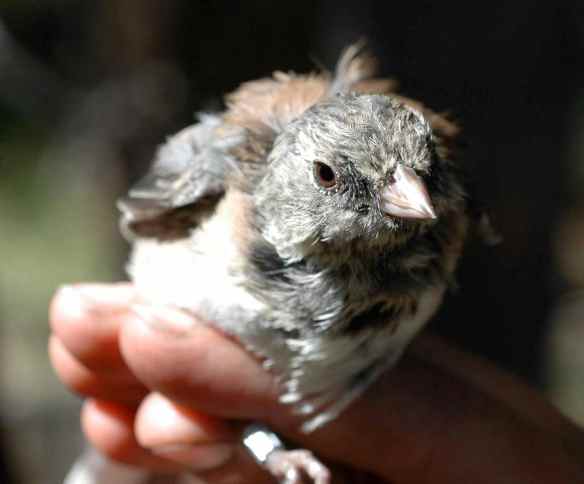 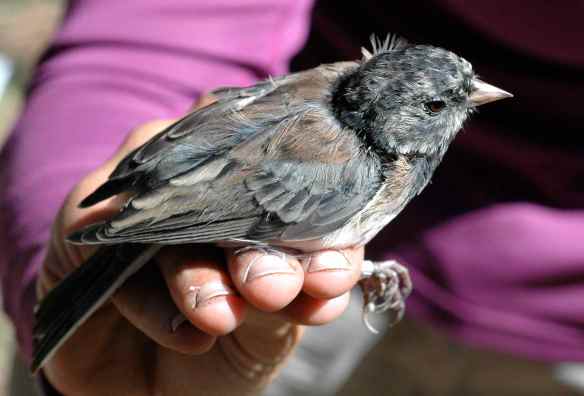 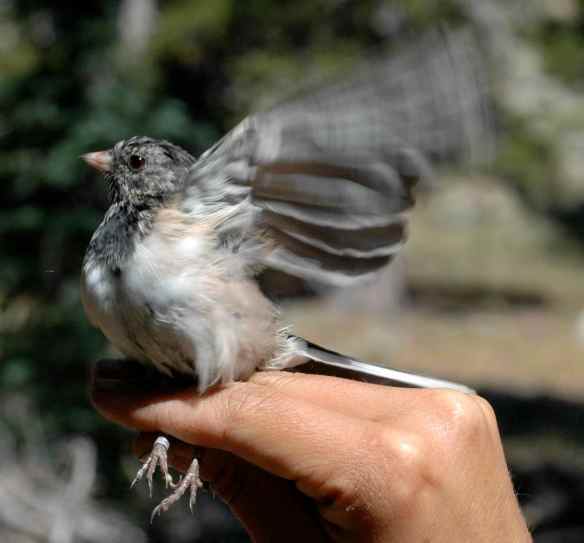 I love the strangeness of the mottled-hood look. The patchy randomness is something you hardly ever see on birds, which generally have crisp patterns or at least systematic spots or streaking, with variation rare. Each of these molting juncos looks a little different from the others. And these birds will only have heads covered in dark and light spots for a short while, just once in their lives. 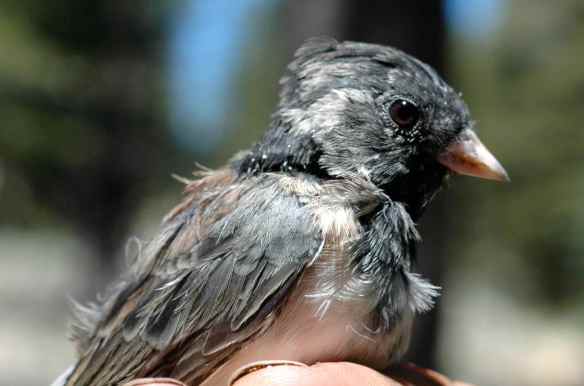 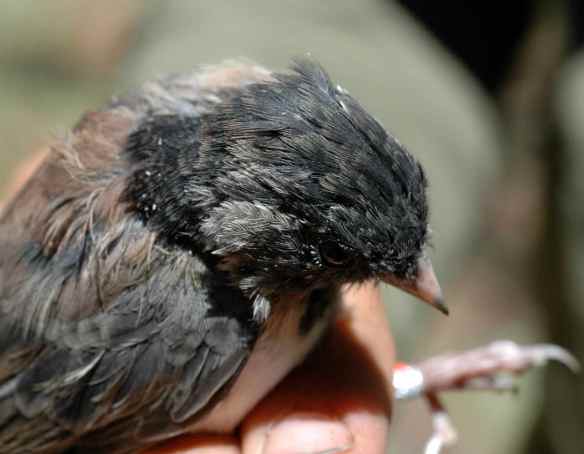 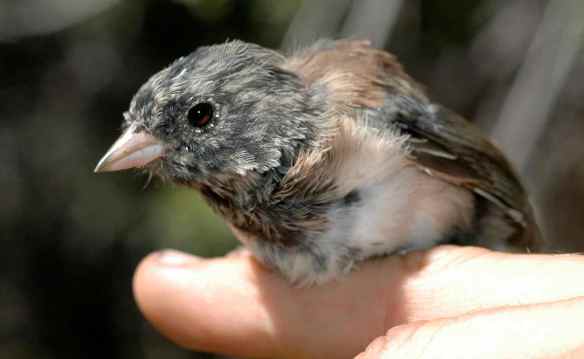 The last light feathers to remain are usually somewhere near the ears. 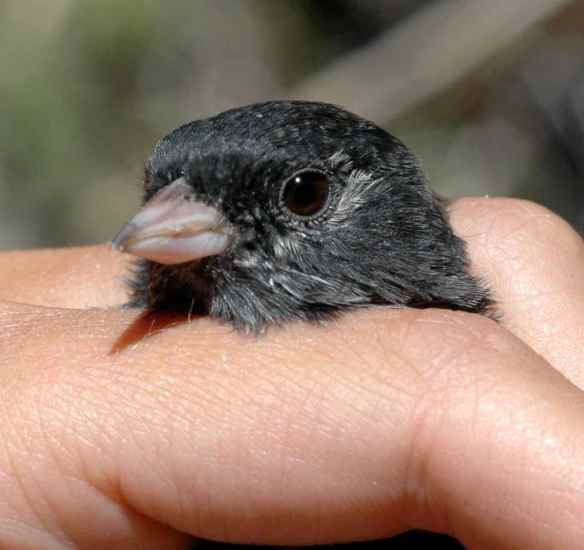 Once those feathers are replaced with dark ones, it’s just about impossible to distinguish the fledglings—the juveniles—from adults. One clue is that the juveniles tend to have more brown in the dark of their hoods. 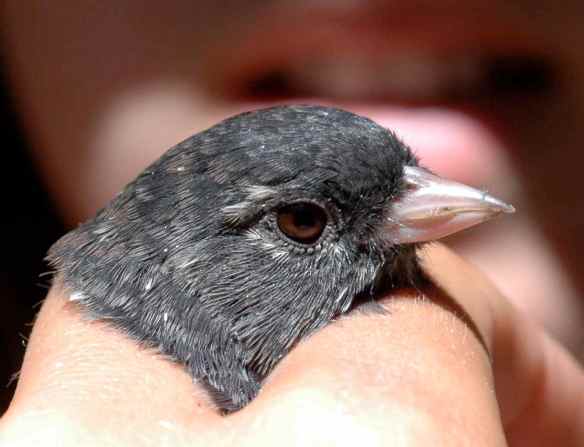 EAGL again. Note the browns in his hood. 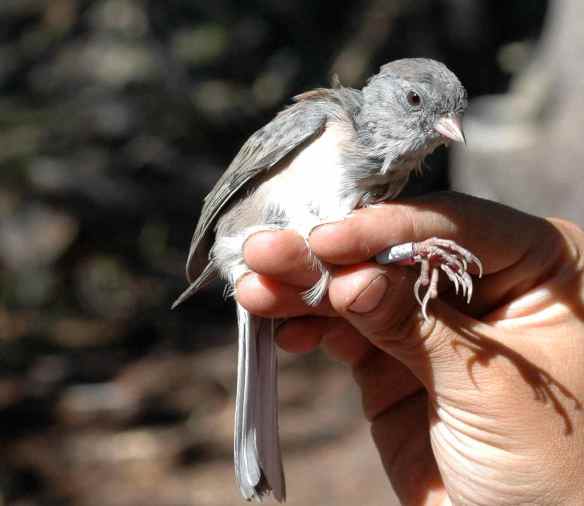 LISA’s hood is especially light and full of browns. 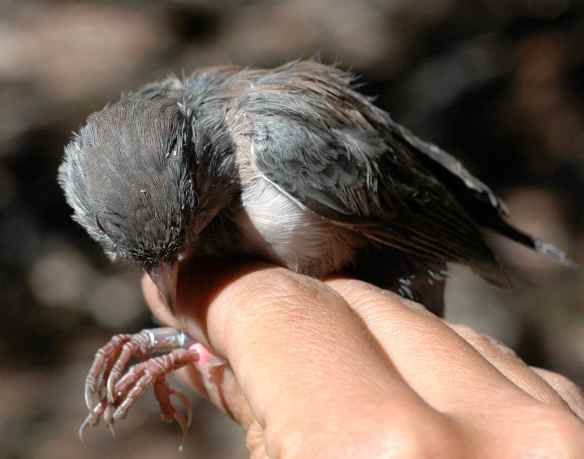 LISA again. Such a pretty head.

Of course, some adults can have very brown hoods too. That’s one reason it’s important to band the juncos: so that when we see a dark-headed bird, we know how old it is. I recently resighted IRKA in my binoculars and he looked completely adult, but I’d seen him with his mottled head earlier, so I knew better.

4 thoughts on “The fleeting beauty of the fall molt”