We banded the chicks from The Nest That Came Back From The Dead. They were all a bit small, looking about a day younger than their actual age; that might be because of their pinecone encounter, but it also might simply be that they aren’t getting much food. They hatched pretty late in the season, so there aren’t as many insects out now, and we’ve only ever seen one parent feeding them. Their “single mom” may be having trouble finding enough food for the three of them.

That may not sound great, but the important thing is that they’re alive. If they can make it another two weeks, they’ll be flighted and fattening themselves on fall’s plentiful seeds. The biggest of the chicks, ROAN, clearly can’t wait to be flying: 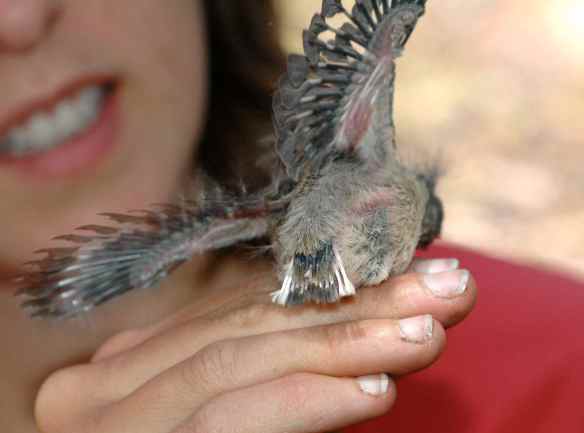 The two little chicks weren’t quite at the practice-flying level yet. They seemed to be practicing perching-motionless-and-not-being-noticed—which is also an important fledgling skill, so, good for them.

We’ll be keeping an eye out for them, of course, but even if they survive, we may not see them again. Fledglings hide, and leave. We probably won’t ever know their fates.

Still I’ll be hoping to see them in the fledgling flocks this winter—or as adults next spring.

3 thoughts on “Update on The Nest That Came Back”