This Chestnut-backed Chickadee is molting his head feathers, hence the odd colors.

After breeding, if you’re a bird, comes molting. Time to discard those old, worn, raggedy flight feathers and start with some fresh ones for the long haul of the fall molt, or replace sparse downy feathers with good warm ones for the cold of winter. This means that around now—from mid-July to September—you may see a lot of birds who aren’t looking their best.

You have probably seen birds in flight with big notches or gaps in the wing. These birds are molting their primary feathers. The old primary falls out and the new one grows in its place, rather like our teeth when the baby tooth gives way to the adult tooth. While the new primary is growing, there is a gap. 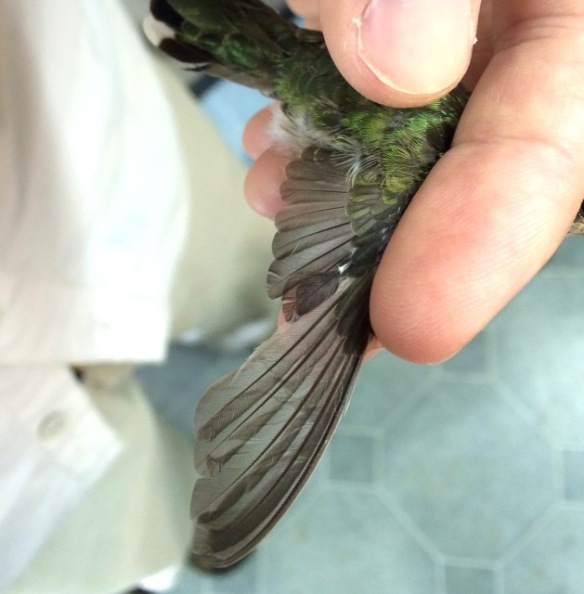 You can identify growing feathers by the whitish covering—the sheath—around their base. This protects the feather while it emerges from the skin. The sheath eventually breaks into pieces and falls off, giving molting birds the appearance of dandruff.

Juvenile Common Yellowthroat growing in some new coverts. Note the sheath on the growing feathers, with just the tips of the feathers peeking out.

Most birds drop and then regrow their flight feathers a few at a time, so that they can still fly while molting. Ducks and geese, however, drop all of their flight feathers at once, rendering them flightless while they grow them all back. Many ducks go to specific “molting grounds” to do this: somewhere with lots of food, and fairly safe, so that the flightless ducks can survive their temporary incapacity and eat enough to quickly regrow those feathers.

First-year (?) Surf Scoter missing all of her flight feathers. 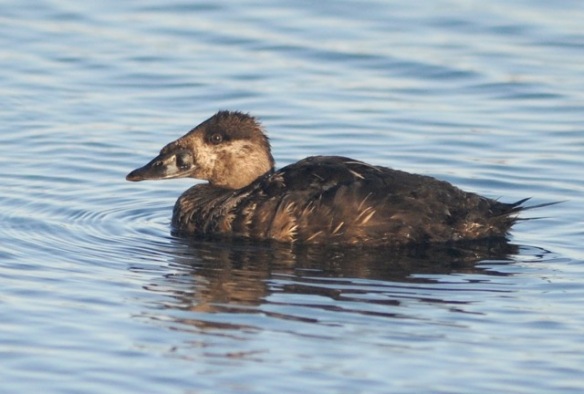 It isn’t just flight feathers, though: body feathers molt too. This is harder to see, but sometimes is obvious when it causes color changes on the bird. I’ve described this in juncos before, and here you can see it in a juvenile male Brown-headed Cowbird: 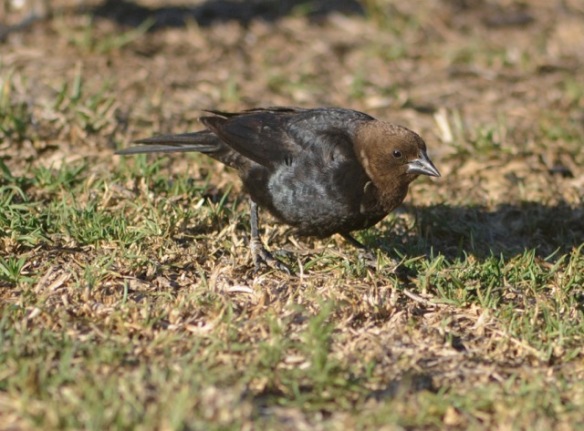 Juvenile cowbird just beginning to grow in some patches of dark adult male plumage. I think the tail feathers are all newly molted too, given how dark they look.

Body molt can also be visible when it causes the bird to look a bit mangy. 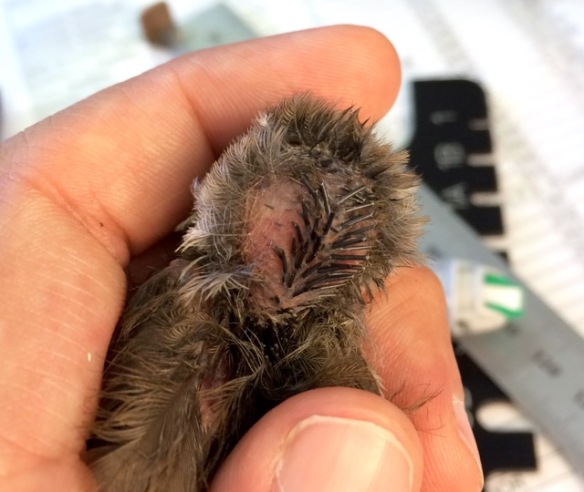 The back of the head of a Bewick’s Wren, with all feathers new-grown and still in their sheaths. This bird was perfectly healthy, just a bit odd-looking at this stage of his molt.

More normally, the bird may just have some whitish specks visible where it is molting.

You may also see birds lacking tails this time of year. Don’t worry: the tails are growing.

In the case of the black-and-white-tailed junco, this time of year yields juncos who appear to have pure white tails. 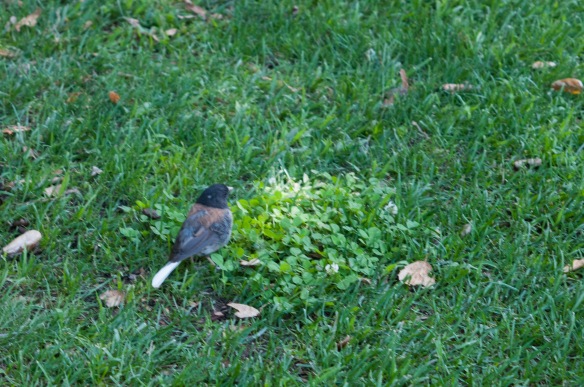 They don’t really: they’ve just molted out the middle, black feathers, leaving only the outer white feathers. The first time I saw this, I didn’t make the connection to molting, and thought I’d found another mutant junco; my field notebook from that date contains a highly excited description of the “white-tailed junco,” complete with a sketch.

2 thoughts on “Birds looking odd? They may be molting”