If any animal ought to be able to expect a safely uneventful life, it’s the compact, guinea-pig-adjacent tuco-tuco. These South American rodents live in burrows underground, popping up into the dangerous above-ground just long enough to grab some veggies for dinner and then retreating again into their tunnels. Male tuco-tucos have the occasional reckless phase, during which they travel above-ground in search of tunnels inhabited not by familiar females but by attractively novel females; but aside from that, they stay underground. 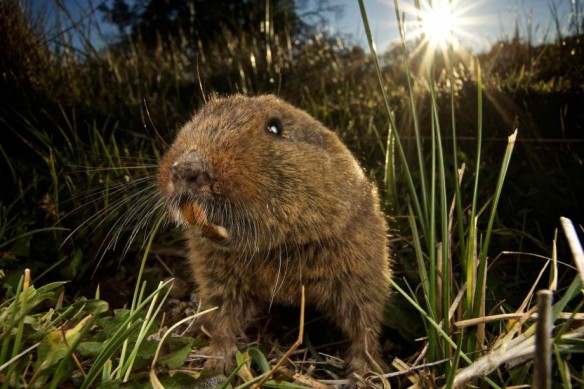 Perhaps it’s fitting, then, that the danger also came from underground, pushing through its own tunnels, burrowing upwards like a hungry tuco-tuco. Late on June 2nd, 2011, and continuing through June 3rd, in the area around the Puyehue-Cordón Caulle volcanic complex in Chile, more than one thousand earthquakes shivered the earth. They came more and more frequently, until by midday June 4th they were coming more than twice per minute, a near-constant shuddering.

At 3:15pm a spot on the mountain exploded and sent a 5km-wide ash and gas plume into the sky.

Satellite image of the ash plume during the eruption. Photo courtesy of NASA. 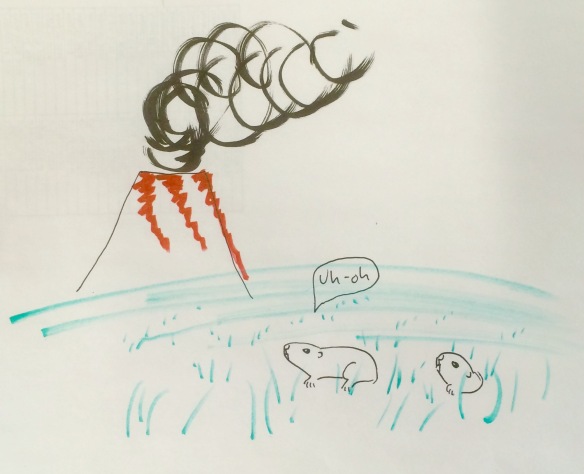 The initial eruption lasted two weeks, covering the region in up to 30 cm of ash, and ash continued to fall intermittently for months afterward. Millions of fish died when the eruption heated their river water to unbearable temperatures; flights were cancelled; plants died and livestock starved.

In Berkeley, CA, Dr. Eileen Lacey wondered about the population of tuco-tucos she had been monitoring since 1992. Were they alive under all that ash? They would have easily survived the initial ashfall, assuming they could breathe, but was the ash smothering the plant food they relied on and starving them? In December, she went south with fellow tuco researcher Mauro Tammone to find out whether the tuco-tucos still existed.

Dr. Lacey in the ash. Photo courtesy of Eileen Lacey.

They were alive! The past few months had not been easy on them, however: their population density was low, and there were fewer year-old females and fewer new babies than usual.

The tuco-tucos’ main challenge after the eruption was food. They rely on the plants growing near their burrow openings; when these plants run out, they have to make new tunnels to new plants, which takes a lot of energy. If plants can’t regrow faster than a tuco-tuco gets exhausted from tunneling, that little rodent is in trouble. Dr. Lacey tested the growth rate of one of the tuco-tucos’ favorite plants and found that just 5 cm of ash substantially reduced the growth of new shoots, and ash depths of 10 and 15 cm cut the number of growing shoots in half. When Dr. Lacey’s collaborator Risa Takenaka compared the stable isotopes in samples of tuco-tuco fur from before and after the eruption, she confirmed that the types of plants making up the tuco-tucos’ diet had been changed by the eruption.

The tuco-tucos could not get through a major volcanic eruption unscathed—but they were not gone, either. Over time the ash cover would disappear, the plants would rebound, and the surviving tuco-tucos would expand their population again. Historical evidence suggests that the tuco-tucos have survived a major volcanic eruption at least once before: that time, too, their population size was reduced, but they made it through.

A tuco-tuco in the ash. Photo courtesy of Eileen Lacey.

Long-term studies of wild animals are rare: it’s hard to get funding for them, and hard to get folks excited about results like “Year 12 looks pretty much like we expected!” Yet there are many things that you can only find out by studying animals for a long time. Major volcanic eruptions are not exactly top of that list, if only because no one expects them to happen—but without Dr. Lacey’s decades of research on the tuco-tucos, we would not have had a good sense of what “normal” years look like for them, and so could not have tested whether the eruption had an effect. Most years are normal years for most animals, but to survive to see those years, they have to make it through the rare abnormal years. Being able to scientifically document those abnormal years is a rare and precious thing.

*Oh look, it’s me! I analysed the data and helped (with all the other authors) write the paper.

2 thoughts on “Can tuco-tucos survive a volcanic eruption?”