Nothing better demonstrates the axiom “familiarity breeds contempt” than the pigeon. Pigeons have remarkable navigation skills and are extremely powerful fliers. They perform courtship dances and mate for life (as much as any bird does, anyway). Both parents care for the chicks. They have an adaptation—”crop milk,” a substance that they produce and feed to their chicks, similar in concept (if not physiology) to how we mammals produce milk for our babies—that allows them to breed in habitats most birds could never hope to raise a family in. They thrive in urban environments, making them probably the first and most-often seen wild animal of many city-dwellers. They recognize each other as individuals. They are smarter than you think.

Concerning their usefulness to humans, pigeons are easily raised in captivity and edible. They have been bred into many domestic varieties with strange attributes, such as the propensity to roll over in mid-air. Charles Darwin studied domestic pigeons extensively, and they contributed to the formation of his theory of evolution by natural selection. They have been important message carriers in wartime; pigeons have received the Dickin Medal—like the Medal of Honor, but for animals—32 times, more than any other species (dogs are closing in with 31 medals). 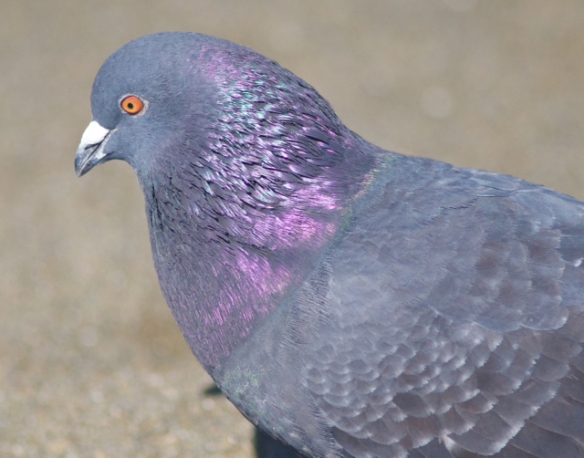 And they come in sparkly colors with crazy eyes.

“Rats with wings,” people say—patently untrue: you can’t get plague from pigeons. “Dirty,” people call them; as if it isn’t our dirt they are wearing, and yet thriving anyhow.