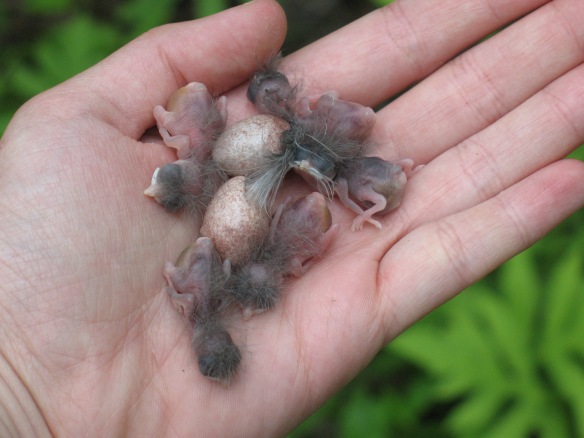 I got my start in ornithology studying the love lives of House Wrens. House Wrens pair up to raise their babies in a manner compellingly analogous to the human “nuclear family;” but, like most birds, both partners also often “cheat” on each other (i.e., copulate with other birds). This means that the male wren may have chicks in other nests besides his own, and he may end up caring for chicks that are not biologically related to him. (Note: edited. The original version of this sentence had a mistake.)

This sets up a number of interesting questions, such as: why cheat on your partner? Are the chicks sired by outside birds somehow better? Do males know when they are caring for chicks who aren’t their own? The answer to the latter question seems pretty clear (no, the males do not know), but the former two are more challenging.

I spent the summer of 2009 (ooof, let’s all pretend that doesn’t sound like such a long time ago…) trying to address those questions in House Wrens. I was interested in how a chick’s paternity—whether its biological dad was its mother’s mate, or not—might affect its growth.

House Wren chicks need to grow quickly. They hatch out weighing about 1 gram, and they have about 12 days to reach 10 grams and grow all of their feathers. 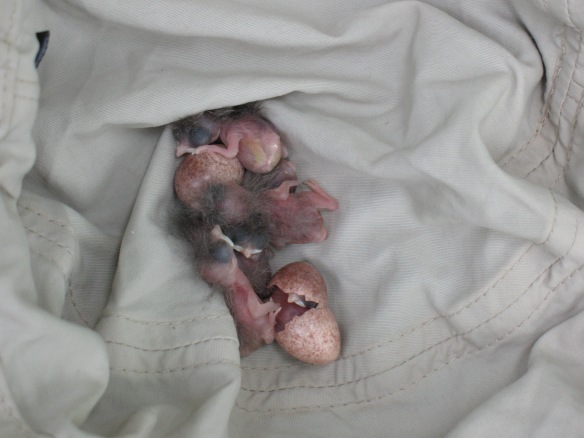 The contents of nestbox 18: four chicks hatched earlier that morning, one unhatched egg, and one egg (lower right) actually in the process of hatching.

The just-hatched chick, still wet from the egg. 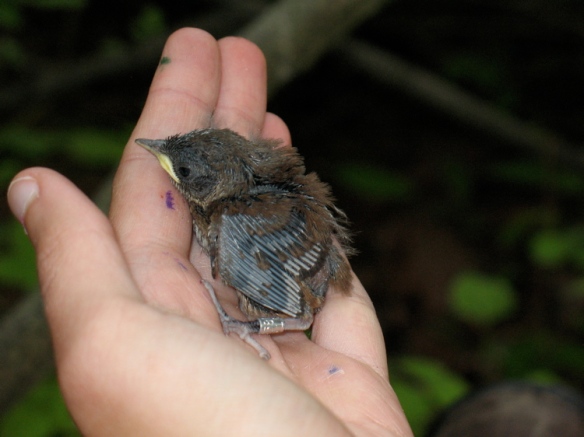 In 8 days, that chick needs to look like this.

In 12 days, that chick needs to look like this.

Some studies had found that chicks who were the product of their mother’s cheating grew larger than their half-siblings. This suggested that those females might be seeking out high-quality males to cheat with, and passing on those better genes to their chicks. But the issue was far from settled—some other studies had found no such effect. So I spent the summer weighing the wren chicks every day or two, and when they were old enough, collecting a blood sample to use for paternity analysis.

It was a lot of fun. There’s not much like the tactile sensation of an entire brood of baby wrens squirming in the palm of your hand; and the satisfaction of being able to replace them safe in their nestbox as if I had never been there—often before the parents even noticed my presence—was enormous.

As I worked with the wrens, I noticed something important: there were runts. Most chicks in a nest would hatch on the same day, but sometimes there were one or two chicks who hatched more than a day later. These chicks perpetually lagged behind their siblings in age (of course) and size.

A brood of American Robins illustrating this: the chick in the middle looks about two days younger than its siblings.

Excited as I was about these questions—paternity, growth, and runtiness—my data proved tricky to analyse. I was delayed by statistical questions, and then distracted by my new junco research. My other house wren papers came out, but this one stayed on my computer, a perennial first or third or eighth draft.

When I finally cracked the statistical issues, the story the data told me was a complicated one. Chicks that were the product of cheating were not any heavier than their half-siblings. However, chicks with late-hatching “runt” siblings were heavier than chicks without any runt siblings. Being a runt is a disadvantage for the runt, but it seems to be an advantage for the runt’s siblings. There are a few possible explanations for this; for example, it may be that the parents bring food based on how many nestlings are begging, but that the runts are especially bad at competing with their big siblings for that food, so the big siblings end up getting extra food when the runt fails to secure its fair share.

Here is where it gets complicated: that benefit of having a runt sibling was greater for product-of-cheating chicks than for their half-siblings. This is a peculiar result, with too many possible explanations to get into here; but the important point is that there does seem to be something different about the chicks that are the product of cheating. They aren’t straightforwardly heavier, but they are different.

I joked to my students this fall that much of my research has been based around discovering things that do not explain cheating in birds. This paper doesn’t quite change that, but it does suggest an intriguing piece of the cheating puzzle.

Another fun part of this research: to tell the chicks apart so that I could consistently match weights to individual chicks, I colored their legs with nontoxic marker.