Grandmothers are an evolutionary mystery.

Well, not grandmothers exactly: rather, women who have passed menopause. Human men can sire children as long as they live, but human women can’t have children after they go through menopause. But why do we have menopause at all—why stop having babies? Isn’t it always better, evolutionarily, to have more babies?

I don’t know, this might be too many babies…

The mystery is far from solved, but we have some good clues.

One idea, the “grandmother hypothesis,” is that post-reproductive women help raise their own grandchildren and great-grandchildren, and that this helps pass on their genes more than it would if they simply kept having their own babies. We do know that having grandmothers around can help their grandchildren in measurable ways. The problem is that it isn’t enough to show that having Grandma’s help is better than not having that help; you need to show that having Grandma’s help is better, from the perspective of passing on Grandma’s genes, than if Grandma kept having her own children for her entire life. This is very difficult to test because we don’t have any women who don’t go through menopause, so we can’t do a comparison.

Another idea comes to us from studies of whales and elephants: maybe women stop having children because, at a certain age, their wisdom becomes so valuable that it’s better for their social group—which is mostly their relatives—if they avoid the risks of reproduction in order to live to guide the group longer. Reproduction, after all, is risky and takes a lot of energy. A female who ceases reproducing will probably live longer.

Orcas are one of the few other species in which females live for a long time after they stop being able to reproduce. Females orcas generally breed between the ages of 12 and 40, but they can live past 90. Resident orcas—the orcas that eat mostly fish, rather than other types of orcas that eat mammals—live in groups of their own relatives. 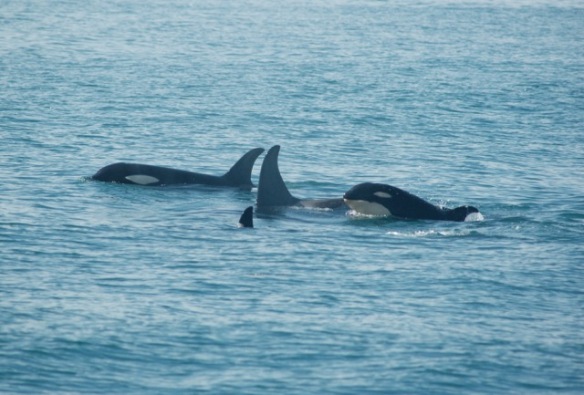 Orca family group with a calf.

These orcas eat mostly salmon, and their own survival and ability to reproduce depends on their ability to find lots of salmon to eat. This can be tricky, because the number and location of salmon varies a lot from year to year. If you’re in a group of orcas that is good at finding salmon, you’ll do well—but if your group is bad at finding salmon, you will have trouble raising young, and might die.

These baby salmon will grow up to be delicious—and hard to find.

This is where the post-reproductive females come in. They are the oldest orcas in the group, meaning they have the most experience in when and where to find salmon. The researchers found that these females led their groups more than any other individuals. Even more tellingly, they led the groups even more in bad times when salmon were scarce. When the times get rough, orcas rely on the wisdom of their eldest females to locate their food. (Where are the elder males? Dead, I’m sorry to say: male orcas rarely live past 50.)

The presence of these females has a quantifiable impact on their offsprings’ survival. In the year following their mother’s death, adult orcas’ risk of dying increases 2-8 times. If you consider that these adult orcas probably have young of their own, which may not even be grown into adulthood yet and will therefore be dependent on their own mothers for survival, you can see that the survival of a grandmother may have a huge effect on her grandchildren’s wellbeing.

Another example in support of this wisdom-of-Grandma hypothesis comes from elephants. Female elephants don’t have the 40+ years of post-reproductive lifespan that humans and orcas do, but they can live a bit past their reproductive years. And, similarly to orcas and humans, they live in social groups with their relatives. These groups of elephants frequently encounter each other, and—again like humans—sometimes these other groups are friends, and sometime they aren’t. When facing a hostile or unknown group, elephants bunch up in a defensive formation. When meeting friends, they don’t. 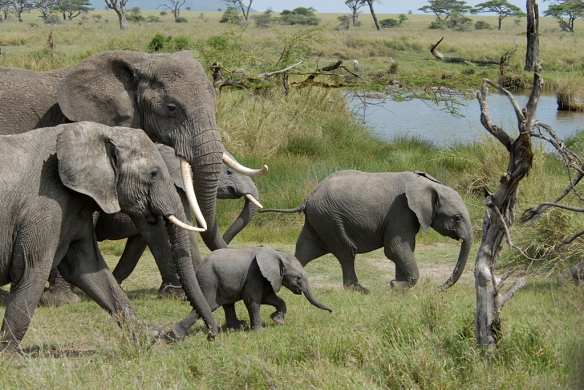 A good reason to be defensive: tiny calves.
Photo by M. LaBarbera

But how do you know who is friendly? There may be a lot of elephants to keep track of, and you may encounter any given group only rarely. You could bunch up defensively every time you meet any other group, but that would be a big waste of time, and you would lose out on opportunities for cooperation with friendly groups. Researchers studied which elephants in a group decided whether the group should bunch up defensively, and they found that it was the oldest female who indicated to the rest of the group whether they needed to be defensive or not. The oldest female elephant has met the most other elephants and has the best knowledge about which groups are friendly. A group with a very old matriarch benefits directly from her wisdom: they don’t waste time being defensive towards friends, and they are defensive when they need to be.

So why do women go through menopause? Maybe because they know so much by that age that it is even more important for them to live a long time to use that knowledge than it is for them to have more babies. And, considering how much evolution tends to favor having lots of babies, that suggests some very valuable knowledge indeed. 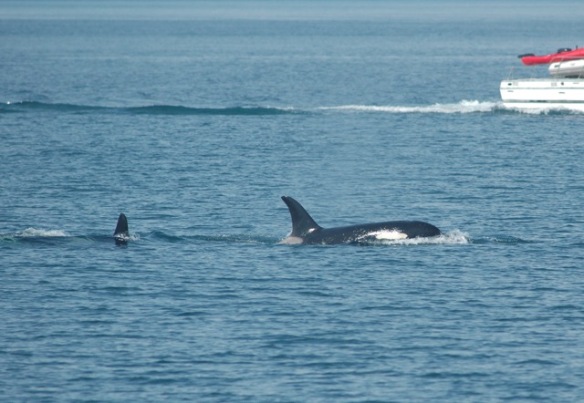 That’s right: you listen to me, Junior.

3 thoughts on “Advice from whales and elephants: listen to Grandma”