Furry animals can spend a lot of time licking their own fur. Here, a mother sea otter demonstrates:

The simple explanation—that these animals lick their fur to keep it clean—is more or less true, but not nearly the whole story: animals get a lot more out of licking their fur than a stain-free coat.

Let’s start with those otters: yes, they are licking their fur to keep it clean, but not so that they will look nice on postcards. Otters live in cold water. Other water-dwelling mammals like whales and seals keep warm with a layer of fat under their skin; otters, instead, rely on having a very warm coat. They keep that coat warm by stuffing lots of tiny air bubbles into their fur. Pockets of air are great for warmth: goose-down coats are warm because the downy feathers trap lots of air; cold birds fluff up into round fluffy balls because that puts more air into their feathers, keeping them warmer. 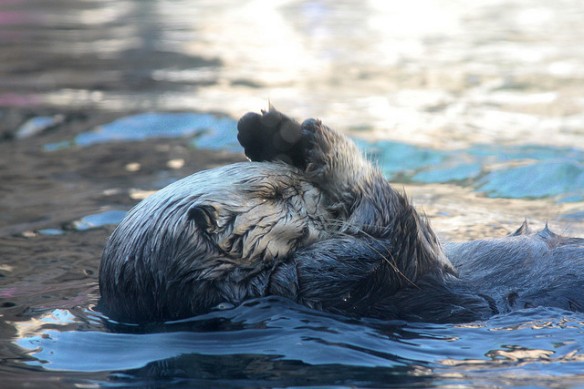 Gotta smoosh enough air into my face.
Photo by brx0*

Unlike a layer of fat, which pretty much looks after itself as long as the animal eats enough, an otter’s warm coat has to be constantly maintained. Dirty fur won’t hold air as well, so otters constantly groom themselves to keep clean and airy. This is why oil spills can be so bad for otters: if they can’t get the oil off their fur, they can’t keep air in their fur and get too cold in the frigid water.

Baby otters have different fur from adults: it’s fluffier and traps more air, and so keeps them not only warm but extra buoyant. This allows an otter mom to leave them floating while she goes hunting or grooms herself and not worry that her pup will sink. Pups take a while to learn to groom themselves, and until they do, it’s up to mom to keep their fur in good condition. Perhaps the most important fur-licking the mom does is to groom her pup immediately after it is born. A newborn pup is covered in wet fur, which doesn’t have any air in it and so is neither warm nor buoyant. One observation of a newborn otter pup notes that “the pup’s fur was wet and lay close to its body in a manner never seen in other pups” (Sandegren et al. 1973). The mother otter “vigorously” licked her pup for two and a half hours (!), until its fur was dry and fluffy. 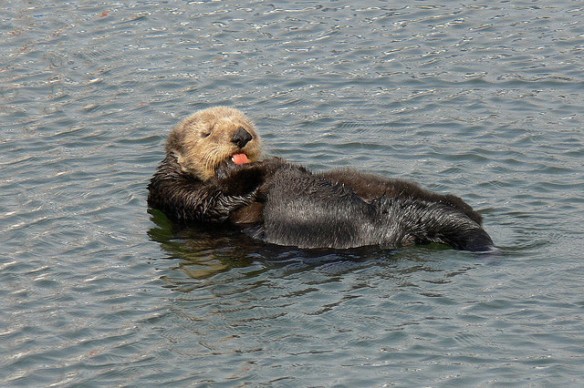 Get that baby dry.
Photo by Jodie Wilson* 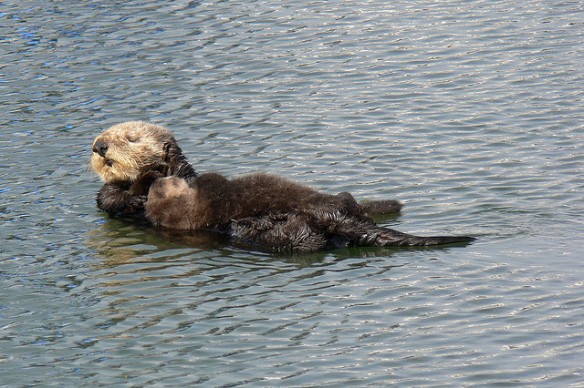 Okay, enough of that. You’re dry.
Photo by Jodie Wilson*

Dirty fur is full of parasites and germs

Dirt isn’t the only thing animals get on their fur. Parasites like ticks drink the blood of the animal, pass on diseases, and just generally annoy everybody. If you prevent impalas from grooming themselves, they get covered in ticks—and as soon as you allow them to groom again, they go to it with a vengeance to get rid of all those ticks (Mooring et al. 1996). 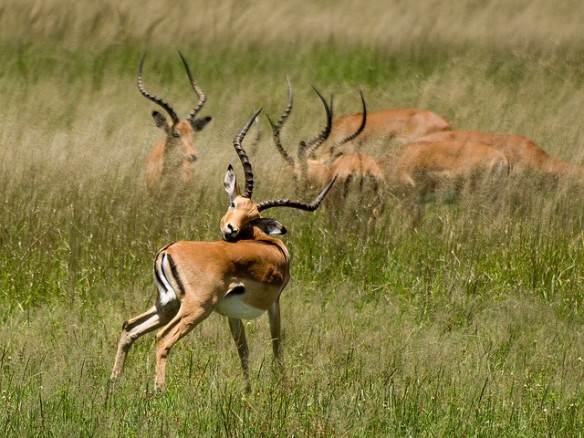 Bacteria are also on fur. Generally this isn’t a problem; skin a good barrier, and as long as any bad bacteria stay outside, the animal is fine. Bad bacteria on fur can be problem, however, in two situations: when the animal gets wounded, breaking that skin barrier, or when the animal is nursing babies which might accidentally eat some of the bacteria. In these cases, animals can lick their fur not only to physically wipe away bacteria, but also to kill them outright: saliva can kill many kinds of bacteria. Animals lick wounds when they are hurt to get rid of dirt but also to kill bacteria. Nursing animals will lick the area around their nipples before the pups nurse to clean the area of any bad bacteria (Hart & Powell 1990). (You may wonder why the babies’ saliva wouldn’t kill any bacteria they ingested. It might, but baby animals have very weak immune systems, so even a few bad bacteria could be dangerous.)

Animals that live in social groups will often groom each other. This probably started out as a hygienically-motivated practice, since it does help remove parasites and dirt, and grooming with a friend can let you reach places you otherwise couldn’t; but now many animals groom each other more than they need to simply stay clean. 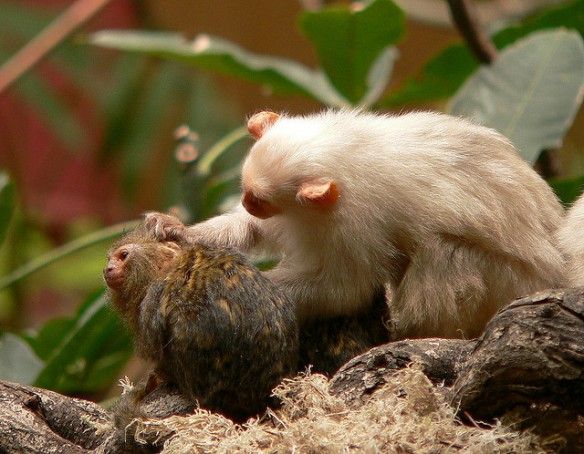 Your ear is clean, but I’m going to keep going.
Photo by Robin Bray-Hurren*

Animals like primates, horses, and bats seem to use grooming as a way to strengthen their group bonds—essentially, a way to say “We’re all friends” (Dunbar 1991). 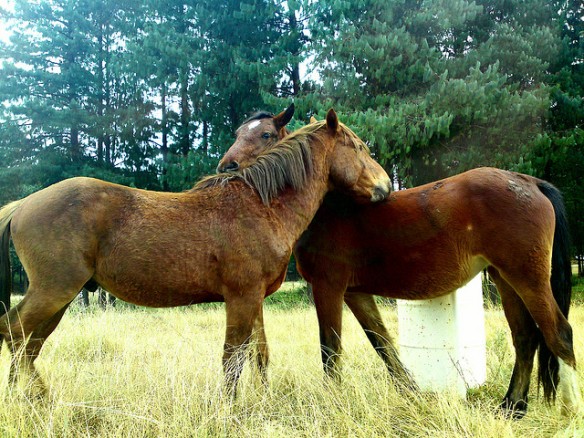 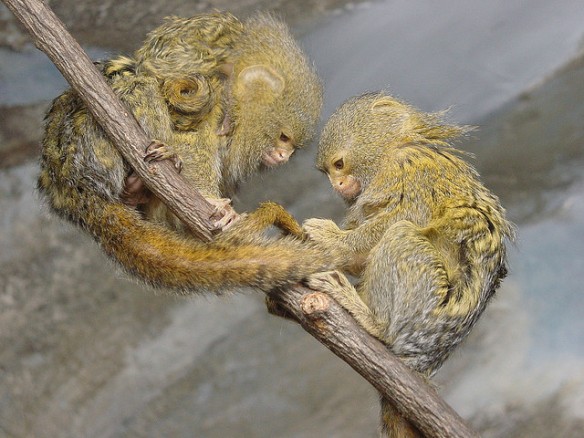 Also friends. (Notice the baby on the top marmoset’s back, too.)
Photo by Paul Morris* 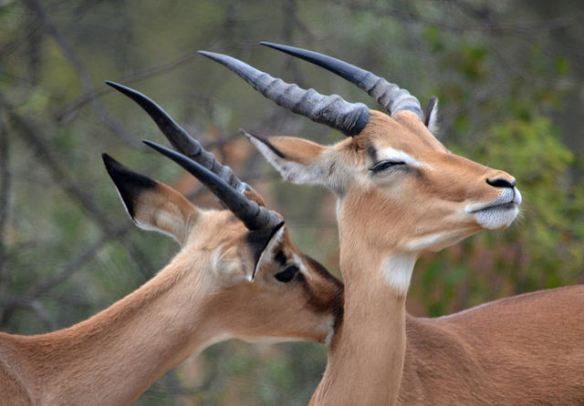 Is this why it feels so good to have someone brush or braid your hair? I don’t know, but I would believe it. Perhaps I should do an experiment: I’ll force my enemies to braid my hair, then see if I feel any better about them afterwards.

A surprisingly large number of studies have been devoted to grooming in mice and rats. (Well, perhaps not so surprising: mice and rats are common laboratory animals, so they get studied a lot.) Their grooming is often “stereotyped,” meaning it is a sequence of behaviors that they always perform in the same manner; for example, they tend to start by grooming their head and then move back along the body. They also do it at predictable times—namely, when they are stressed or anxious. They will groom when presented with a new object (scary!) or placed in a brightly-lit place (danger!). They do also groom when they aren’t stressed, but much less than when they are (Kalueff & Tuohimaa 2005). While it’s hard to get inside the head of a rodent, it seems that mice and rats use grooming as a way to calm themselves down. 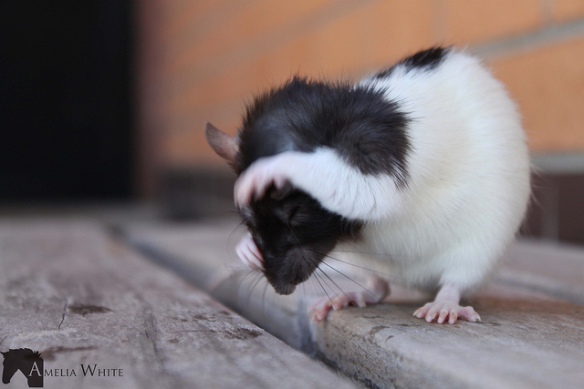 4 thoughts on “Why do animals lick their fur?”