I’ve seen a lot of junco nests in my four years of field work. Rarely, I’ve been lucky enough to happen upon the nest of something other than a junco. I don’t find enough of these other nests to study them, so they don’t help me in my research—but boy, is it fun to find them!

Quick review: this is a junco nest.

This is not a junco nest:

Some major differences: the junco’s is a ground nest, while this one is a cup nest, suspended above the ground in the branches of a bush. The chicks are covered in light greyish fuzz instead of the junco chicks’ dark fuzz, and are maybe a bit stockier than the junco chicks.

The nest is in the bush, right in the center of the photo.

If you don’t spend a lot of your time staring at pink alien bird babies, these two sets of chicks may look fairly similar to you. To me, accustomed as I am to the juncos, these new babies look entirely different—like looking at puppies when you’re used to kittens.

I think that this is a Green-tailed Towhee nest. I’m not completely confident in that ID yet, though; if anyone has evidence for or against it, I’d love to hear it!

This next nest almost fooled me; at first I thought it belonged to a particularly imaginative junco.

It’s almost on the ground, built just slightly elevated in a thistle. Juncos occasionally do build nests off the ground, and a thistle certainly seems like a good idea: those spikes could be protection.

Here is an actual junco nest with eggs:

Can you see the differences between these eggs and the eggs in the thistle nest? They’re a bit similar, but the colors and patterns aren’t quite right, and the shapes are slightly off. This isn’t solid evidence, though: often birds show a lot of variation in their egg coloration within a species. Even in that single junco nest you can see differences between the markings on the eggs. The giveaway that the thistle nest isn’t a junco nest is a combination of things: the eggs don’t look right, the nest structure is different, and the number of eggs is too small. (Juncos occasionally lay two-egg clutches, but it’s not common.)

Oh, and the bird that we scared off the thistle nest wasn’t a junco. That’s a pretty good clue, too.

I didn’t get a great look at that bird, so again I’m not entirely certain of this ID, but I believe this thistle nest belongs to a Red-winged Blackbird.

The nest is just a bit elevated off the ground and hidden in the thistle. 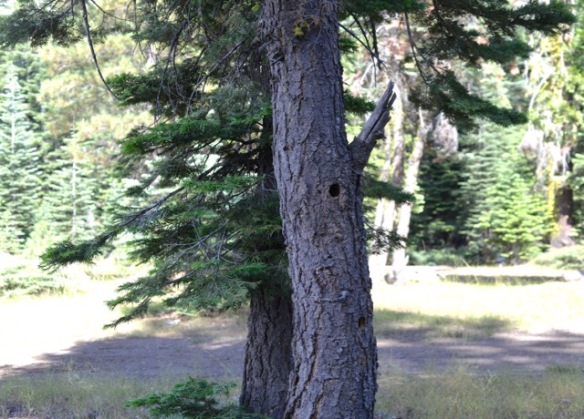 I could hear the chicks cheeping through the wood, and I could watch the parents go in and out of the entrance hole, but the holes were too narrow and deep for me to actually be able to see the chicks inside.

White-headed Woodpecker says, “Good! That’s the whole point of bothering to hollow out a hole to nest in.” 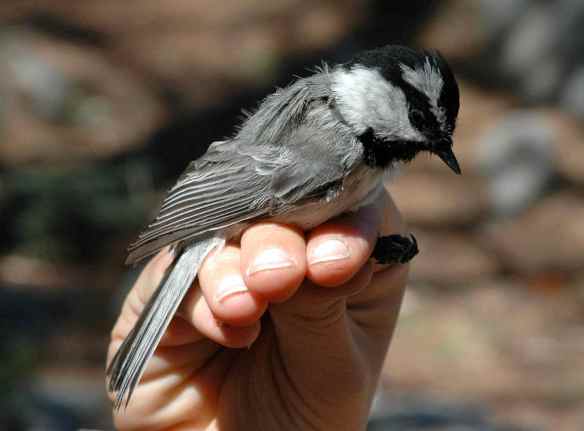 Mountain Chickadee says, “Yeah, plus I’m tiny so I can fit into places you can’t. Hah.”