Photo by jayhem on flickr, used via a Creative Commons license.

Sea urchins do more than you might expect from a spiky ball. They seek out holes to hide in, travel in search of food, cover themselves in costumes of seaweed and rocks, and flee their slower predators. (Even the speediest urchin can’t flee a sea otter, but it has a chance against a sea star.)

All of this is a bit astonishing for an animal that has no eyes. How do they spot their hidey-holes? How do they see the sea stars in time to run away?

An eye is an organ specialized for detecting light. Animals have evolved eyes independently multiple times, coming up with various innovative ways to detect light and, in more complex eyes, to spatially organize that light and resolve an image. Some animals, like humans, have “simple” eyes consisting of a lens that focuses images on a detecting retina; cephalopods like octopus do the same thing, but evolved their eyes independently and actually did a better job of it (humans have a blind spot in one area of the retina; cephalopods don’t). You can make an even simpler “simple” eye by leaving off the lens entirely, giving you a pit eye; this doesn’t work as well, but it’s better than nothing. Other animals, like insects and shrimp, have compound eyes, consisting of many tiny lenses leading to tiny detectors that, all together, make up an image rather like tiles making up a mosaic. Some spiders have both simple and compound eyes. There are many options for putting together a light-detecting organ—but sea urchins have none of them.

Whatever, I’m too cool for them. (Photo by JesseClaggett on flickr, used via a Creative Commons license.)

Yet behavioral experiments show that sea urchins can “see” and move toward dark places. An analysis of a sea urchin genome found DNA coding for six different opsins, light-detecting proteins usually used in eyes. These opsins were mostly located in the urchin’s tubefeet and pedicillariae, tiny claw-like appendages on the surface of the sea urchin at the base of the spines. 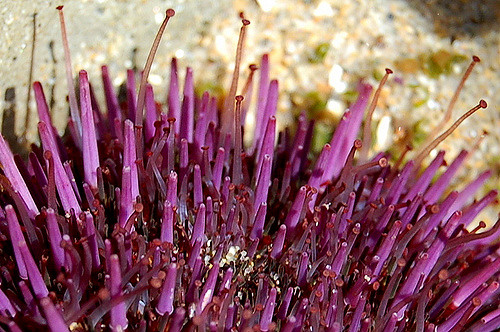 The long bendy appendages with wide tops are the tubefeet. The urchin can extend and retract them, and can grip things with them. (Photo by kqedquest on flickr, used via a Creative Commons license.)

So maybe they detect light with their feet and tiny claws? This is plausible, but would give the urchin such bad vision that it shouldn’t really be able to detect anything more nuanced than “Am I currently in the light or the dark?” The problem here is that if you just put a light-detecting cell out in the open, on a tubefoot or on the surface of the urchin, it will detect light coming from every direction at once. It’s the equivalent of taking camera film out of the canister and exposing it: you won’t get an image, just blank white photos, because the film sees light everywhere. You need a lens to focus the light, to make sure that light from here stays here and light from there stays there, if you want an image. (Hence why you put the film in a camera, which has a lens.)

In addition having lenses, compound eyes make sure that light from here stays here by putting each light detector at the bottom of a well. The walls of the well exclude all light that isn’t coming from directly above it. Put lots of these wells all together in a speroid shape so that each well’s view “up” is a little different, and you can form an image.

The compound eyes of a male striped horse fly: lots of wells, each capped by a lens; you can’t see the wells because they are covered by the lenses, but they’re under there. (Photo by Thomas Shahan on flickr, used via a Creative Commons license.)

And that, it turns out, is what sea urchins are doing: they are detecting light from their surface, probably those little claws, and are using their spines like the walls of a well, to block light coming from most directions and therefore allow them to resolve images.

The best evidence for this comes from findings by Yeramilli & Johnsen (2010) that you can measure spine density in an urchin and use that to predict its visual acuity. Urchins with more spines are able to resolve images better, and so are able to detect smaller objects by sight. 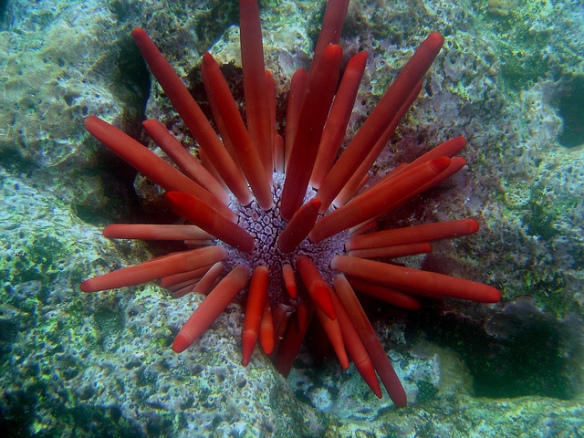 Sorry, slate pencil urchin: your spines are cool, but there are so few of them that we know that your vision is terrible. (Photo by NOAA Photo Library on flickr, used via a Creative Commons license.

Even quite spiny urchins still have pretty bad vision: they can detect objects that take up 10 degrees of their visual field or more. That’s enough to see a hidey-hole not far away, or a looming sea star, but not enough to admire the pattern on a fish swimming by or to see the spines of another urchin they might encounter. 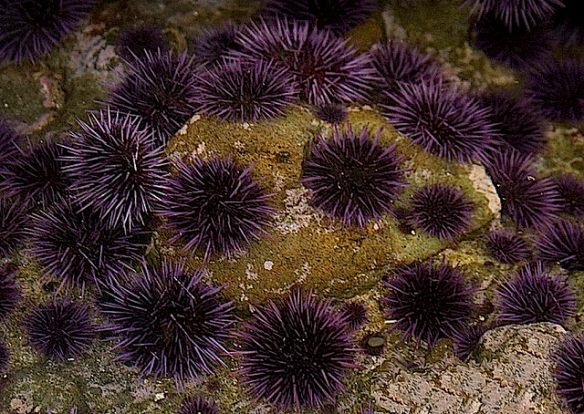 Hey handsome, I like your blurry smudges. (Photo by Gregory “Slobirdr” Smith on flickr, used via a Creative Commons license.)

Nevertheless, it’s pretty cool. Rather than developing eyes like everyone else, these animals have essentially make their entire body an eye, covered in spikes (and tubefeet and tiny claws). 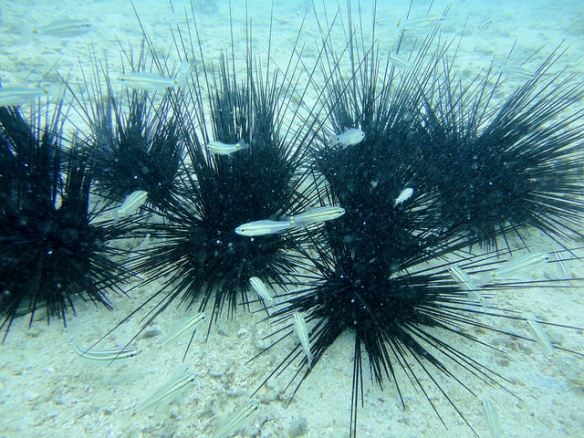 Watch out fish, you’re swimming through a forest of eyeballs! (Photo by Joi Ito on flickr, used via a Creative Commons license.)

4 thoughts on “Sea urchins are giant eyeballs covered in spikes”