Planet Earth II, the new BBC documentary narrated by Supreme Voice of Nature Sir David Attenborough, devotes one of its six episodes to animals living in cities. It’s unsurprisingly great. (Even if the ultimate masters of urban living, pigeons, who you might expect to be celebrated in this context, instead spend the episode getting unceremoniously eaten.) The “Cities” episode has to walk a delicate line, heralding animals’ ability to adapt to human landscapes without failing to acknowledge that humans overwhelmingly destroy habitat rather than creating it. It mostly leans to the optimistic side of the line; one segment makes New York City seem like a wildlife paradise.

The darker side of cities is represented by a segment on hatchling sea turtles. The turtles use the shine of moonlight on water to guide them from their nest in the sand into the ocean. Unfortunately, we humans love to shine lights even brighter than the moon, and more than half of the tiny turtles are drawn away from the ocean by the city’s lights. 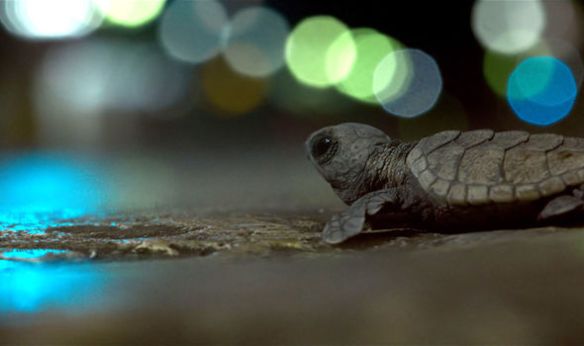 As Attenborough narrates, footage rolls of the baby sea turtles gamely clambering across sidewalks and onto busy streets, heading for the ocean that isn’t there. The bodies of roadkilled turtles are visible in the background. One turtle makes it across the street, then tumbles halfway into a storm grate and gets stuck, lost to view save for one forlornly-waving flipper.

And not just on Google: Twitter was flooded with concerned tweets and broken-heart emojis. 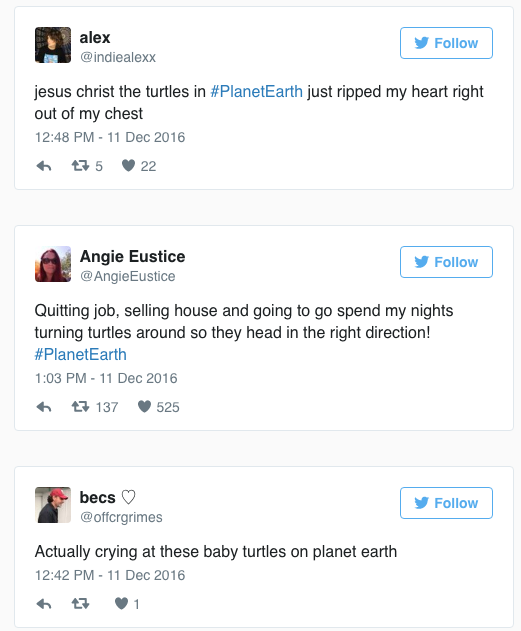 Some tweets collected by USA Today for an article on this topic (article here).

It turns out that they did help the baby sea turtles. The BBC Earth twitter account tweeted back: Every turtle that was seen or filmed by the #PlanetEarth2 crew was collected and put back into the sea. 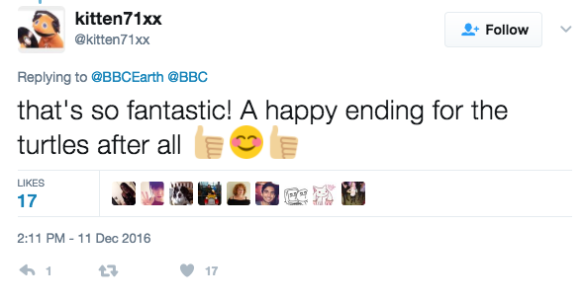 But wait… the point of that footage was to show, in a memorable and heartbreaking way, how animals are endangered when humans change their habitats. Viewers should come away from it troubled, concerned, and motivated to wonder what they could do—turn off some lights?—to help wildlife. “A happy ending for the turtles after all” doesn’t seem like quite the same thing.

An online BBC article puts it like this: “But there’s no need to worry, as all the crawling little turtles featured in the episode were saved!”

Surely the point of the segment was, basically, that there is need to worry?

I am glad that the BBC crews saved those turtles—it would have been rather reprehensible if they hadn’t—but I can’t deny that, even for me, it softens the blow. That turtle trapped in the storm drain wasn’t really trapped. He’s okay. The images of those newly-hatched babies trudging wearily after the siren lights isn’t nearly so haunting now that I know that they were rescued.

Does this matter? Are there people who might have made changes to their lifestyles if the terribleness of that footage had not been blunted? I don’t know. Even if there were, it would be appalling to use that potential as a justification for not helping the turtles.

Perhaps the BBC should have kept quiet about saving the turtles? But no—that would suggest that it would have been all right for them to not act. For an episode that aims to motivate you to help wild animals, that would be a terrible implicit lesson.

This boils down to an example of what I think of as The Problem Of Individuals. In conservation, species matter; individuals generally do not. This plays out in very real ways: for example, duck hunters purchase the duck stamp to allow them to hunt legally, and the proceeds of that stamp go toward waterfowl habitat preservation. The duck hunters kill individual ducks, but the species thrive in their protected habitats. Thanks to this program, waterfowl are the only group of birds that are consistently doing well in the U.S.

But the vast majority of humans are motivated by focusing on individuals, I think, not species or groups. Tell someone that hundreds of dogs are being euthanized for lack of homes, and they will probably be mildly annoyed at you for ruining their morning. Tell someone that this dog, right here, look at those floppy ears, he sleeps on his back and his favorite toy is the squeaky hot dog, is about to be euthanized, and I expect that the reaction would be much stronger. We care about individuals.

To motivate people, then, show them individuals. Show them this particular baby turtle. This is motivating—but then there is a downside. When that particular individual is saved, the motivation is gone.

Yet I don’t think the answer is to force everyone to think only about species. It is at the individual level that we are truly engaged with an animal. We think of ourselves as individuals, after all; thinking of animals as anything else can only be distancing, alienating. Too, when you begin to think that individuals don’t matter, you open the door to some dangerous habits of thought: it doesn’t matter if we destroy this individual’s home, because there are lots of others. The Passenger Pigeon was lost because everyone thought that it didn’t matter if they hunted these individuals—everyone knew there were a lot more, somewhere. That is not the way forward.

I think we have to focus on individuals if we want people to care about conservation. But how do we translate that into measures that save species? The individual baby turtles were saved by being picked up and placed in the ocean. The species might be saved by regulations on light brightness during turtle hatching season, or economic incentives to turn off the lights. We have to somehow make the jump from searching the road for turtles to pick up and take to the water, to campaigning for light restrictions—or whatever the solution may be. And that’s a hard jump: individual-focused action is more viscerally rewarding.

We have to remember that species are made of individuals. This is obvious, yet it’s hard to really, gut-level believe. Those of us hoping to promote conservation need to figure out how to convey this in a powerful way; and all of us should try to remember it as we make decisions in our lives. Taking public transit, conserving water, or urging your government to support conservation may not feel the same as snatching a lost baby turtle out of the way of a speeding car and placing it safely into the ocean, but it is just as important.