We all know about food webs—or we think we do. Herbivores eat plants, then predators eat herbivores, and if one part of the web is affected, other parts are impacted too. Seems pretty simple—except that the threads in those webs sometimes connect things you would never expect. 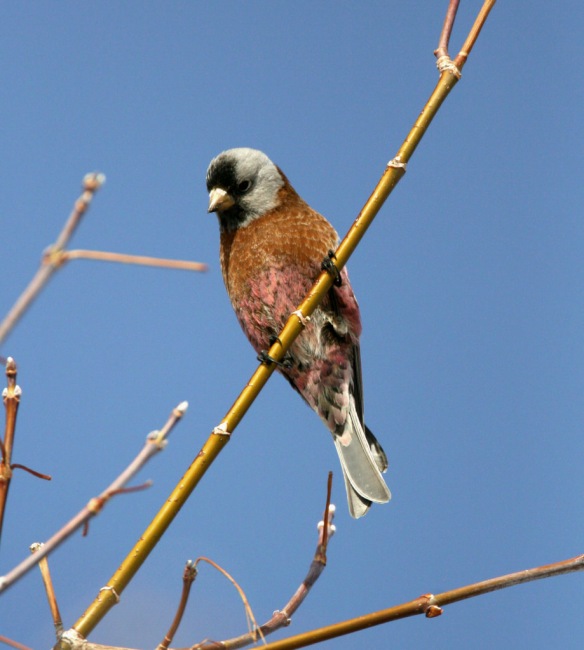 They’re not going to be eating fish, and their babies definitely don’t float about on the water.

The reason that we need to worry about what threads on the food web those trout might be tugging at is that the trout are introduced, nonnative species. Alpine lakes often don’t have any fish in them naturally. In the Sierra Nevada and many other mountain habitats, however, people have stocked these lakes with fish so that people can come and fish them for fun. This has been a problem for aquatic species such as frogs, which get gobbled up quite happily by the new fish, but nobody was particularly worried about the effects on songbirds.

It turns out that we should have been.

Gray-crowned Rosy-Finches, like many songbirds (including my juncos), can survive mostly on seeds as adults but need lots of soft, easy-to-eat protein as babies. That soft protein is going to come from bugs. If you’re one of these birds, it’s crucial to have lots of bugs around in the week after your chicks hatch, when they need to grow as fast as they can. The less your babies eat, the slower they grow, and the longer they are flightless and vulnerable to every passing chipmunk and marten. 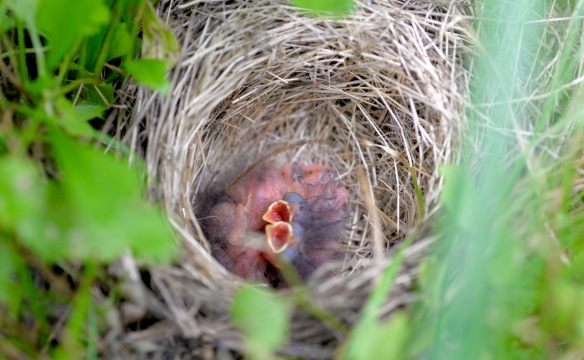 Which is why we want you to FEED US.

Meanwhile, what are those introduced trout doing? They’re eating aquatic insect larvae. Every larva eaten is one that doesn’t grow into an adult insect, fly around, and get caught by a finch and fed to the baby finches. And fish, too, have good reasons to eat as much as they can: the more a fish eats, the faster it grows, and bigger fish have fewer predators. When Epanchin et al. (2010) compared lakes with introduced trout to natural, fishless lakes, they found that the trout-containing lakes had 98% fewer mayflies and almost six times fewer Gray-crowned Rosy-Finches nearby than the natural lakes.

Trout are pretty, but maybe they should stay in the lakes in which they naturally occur. (Photo by stpaulgirl*)

If the idea that trout and songbirds are competitors for food doesn’t surprise you, the next study almost certainly will. Again, consider those bug-eating birds. Now consider what those bugs eat: plants. Wouldn’t it be handy for the birds and the plants if the plants could somehow tell the birds when they’re being eaten by bugs so that the birds could come eat those bugs? Everybody wins! (Except the bugs.)

Mäntylä et al. (2008) tested to see whether birds could tell when a plant was being eaten by bugs without actually seeing the bugs or the damage done by the bugs. They put bags around tree branches and either put live caterpillars in those bags, or didn’t put anything in the bags. Then they put fake caterpillars on the trees. When birds would try to eat the fake caterpillars, they would leave beak marks on them (and then the birds would realize they were fake and not eat them)—this allowed the researchers to look at how much birds were foraging on the different trees, by counting the beak marks on the dummy caterpillars.

Wait, is this bug not real? Photo by M. LaBarbera

Meanwhile, the bugs are coming up with strategies of their own: like this monarch caterpillar, whose pattern advertises, “I’m full of toxins.”

Here is what we don’t know: do the plants produce these chemicals because they attract animals that can eat their bugs, or are they simply chemicals that are produced as a by-product of the plant being eaten? (Imagine, say, that you are hurt and start bleeding: the blood may attract a paramedic to help you, but you aren’t bleeding in order to attract that paramedic.) Animals that eat bugs benefit from cueing in on these chemicals either way, since they indicate a good place to look for bugs.

Birds compete with fish and cooperate with plants. It’s an interesting world.

An interesting world with too many fish introduced where they don’t belong. (Photo by Julio Mulero*)