Animals interact visually all the time. Males try to look big and scary to rivals, or sexy to females. Prey animals try to look inedible—or better, invisible—to predators. Sometimes these animals use visual trickery to assist their cause.

You’ve probably encountered visual illusions before. Here are some classic ones:

a) The vertical line looks longer than the horizontal line, even though they’re both the same length. b) The top line looks longer than the bottom line, even though both are the same length. c) The middle circles are both the same size, but the one on the left looks bigger. d) The middle grey rectangle is just solid grey, but against the gradient background, it looks like a gradient. e) Both circles are the same shade of orange, but the one surrounded by black looks brighter.

Animals can use visual illusions a) and b) to appear bigger by changing their posture. Vertical stances make you look bigger than horizontal ones, and making a Y with your limbs looks bigger than letting them fall down. So if you’re a male peacock spider trying to look big and sexy to a female, you can raise a pair of back legs up in a Y to look bigger than you really are. 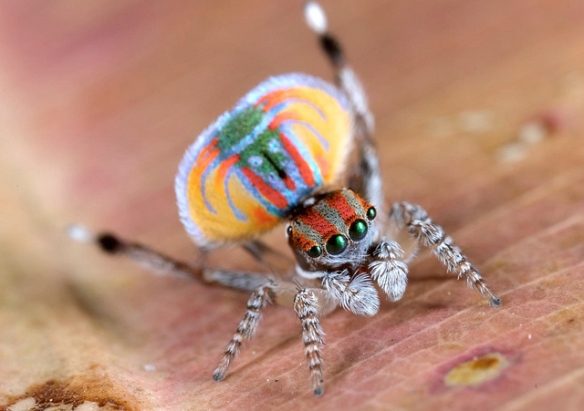 Visual illusion c) shows how objects look bigger when they are surrounded by smaller objects. This illusion actually doesn’t work for all animals: baboons don’t get fooled at all, correctly perceiving that the central circles are the same size, while pigeons get fooled in the opposite direction, mistaking the circle surrounded by bigger circles as being bigger.

Female fiddler crabs get taken in by this illusion just like humans, though. Male fiddler crabs show off their enlarged claw to impress females, and bigger claws are better. Females will approach a male more if the male is displaying his claw next to other males with smaller claws: the large-clawed male’s claw looks even larger in comparison with small-clawed neighbors.

Fiddler crab males showing off their claws. The large-clawed male in the group on the right looks especially large-clawed because his neighbors both have considerably smaller claws.

It’s not clear if male fiddler crabs know enough to use this to their advantage. Male guppies, on the other hand, are on top of it: they prefer to display next to males with smaller color patches than their own. (The title of the paper that found this is “Do unattractive friends make you look better?”)

Male guppy (some sort of domestic hybrid, but displaying the kind of color patches that wild male guppies have). Photo by Chantal Wagner Kornin*

You’ll notice that the male guppy doesn’t just have big patches of color, he also has big patches of black. Why would he do that? He’s taking advantage of visual illusion e), putting black near his color patches to make the colors appear brighter and more striking.

Other animals use striking contrasts with black or white to break up their own image. Predators searching for prey look for a specific prey-shaped outline, so the prey use big patches of a contrasting color to disrupt the contour of their body. 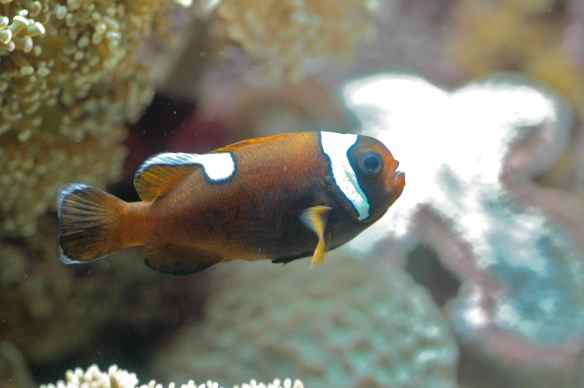 The white marks on this fish break up its distinctive fish-shape, making it harder to see.

The black and white rings on a Killdeer’s neck break up its outline. It’s hard to see from this perspective, but…
Photo by Nicole Mays* 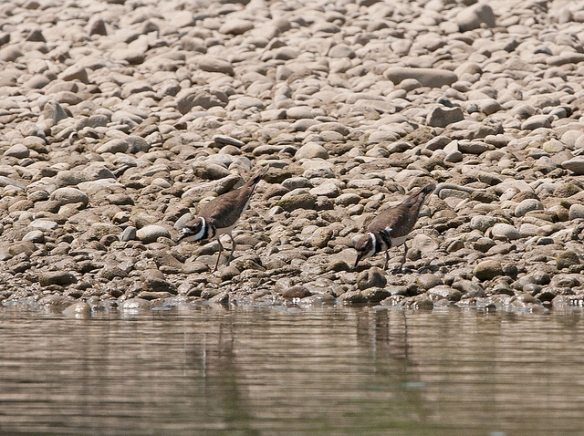 …in a visually complex environment, like this one with stones, the neck markings blend in with the other contrasty edges in the environment and make it difficult to pick out the shapes of the birds. Photo by Sergey Yeliseev*

Killdeer chicks use white and black markings to disrupt their outlines too.
Photo by ArielleView*

And of course what a prey animal uses to hide from predators, a predator will use to sneak up on prey. 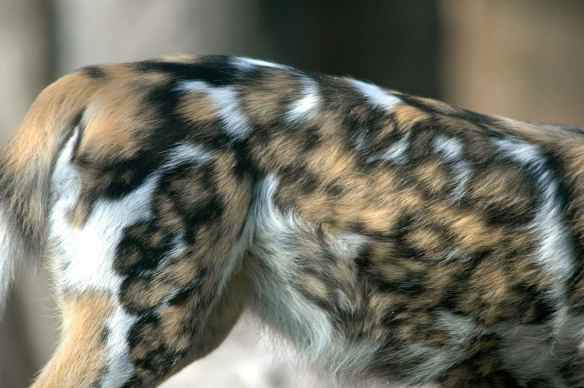 Prey have another visual trick up their sleeves, though: motion dazzle. Motion dazzle refers to the fact that when a striped animal moves in the same direction as its stripes, it is harder for an observer (or predator) to resolve how fast and in what direction it is moving, and therefore harder to catch it. This may be one reason why a lot of snakes and lizards are striped lengthwise: when they run or slither forward, they are moving in the direction of their stripes, and can confuse any pursuers with motion dazzle.

Garter snake. Photo by the Oregon Dept. of Fish & Wildlife*

One of the more elaborate (and stranger) visual illusions in the animal world is created by male Great Bowerbirds.

Great Bowerbird working on his bower. Photo by sunphlo*

Male bowerbirds create bowers of sticks, with collections of items in the “court” in front of the bower. The female then stands in the bower to admire the collection of items, watch the male display in the court, and decide whether to mate with him.

Great Bowerbirds collect white and light grey items (shells, stones, bones, bits of glass) for their court. Then—this is the strange part—they arrange them by size, with smaller items close to the bower and larger items farther from the bower. If you mix the items up randomly, the bowerbird will put them back in proper size order.

We don’t really know why this visual illusion, called “forced perspective,” is considered attractive in male bowerbirds. One idea is that the uniformity of the view presented to the female—all those white objects all looking like the same size—appeals to her visually. There isn’t a lot of uniformity in nature, after all, so it may be a striking contrast to the rest of the world.

Since the criteria other bowerbird species’ females use to evaluate bowers is usually along the lines of “Are all the objects blue?”, I suppose “Are the objects in apparent defiance of perspective?” isn’t objectively any stranger.

Are all the objects blue?
Photo by Melanie Cook*

Are all the objects snails?
Photo by Kasi Metcalfe*