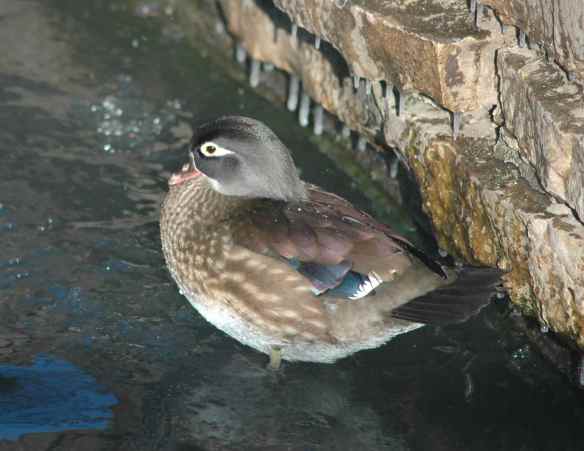 Female Wood Duck in Chicago in the winter.

A reader question today! Dolores asks: Would the body heat of a modest mixed gathering of water birds (gulls, ducks etc) melt ice at the edges of a pond?

The answer to this depends on context. We can start by establishing some extreme end-points: one duck at the edge of a huge lake in way-below-freezing weather would not be able to melt any ice. 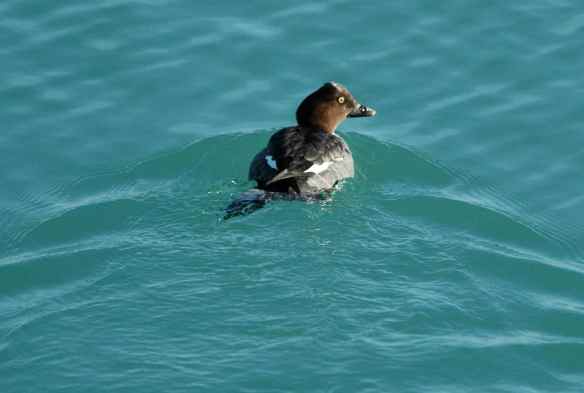 Female Common Goldeneye in Lake Michigan: it’s a good thing the lake is already melted, ‘cos you’re not going to melt anything.

Twenty ducks splashing around spiritedly in a kiddie pool with the barest skin of ice in weather just at the freezing point would probably, if you waited long enough, cause the ice to melt.

Between our two endpoints are more “normal” circumstances: a group of waterbirds hanging out at a pond. Could they melt any ice?

There are several reasons why your gut feeling should be telling you that the answer is “no.” First is the fact that we often see waterbirds standing on ice. 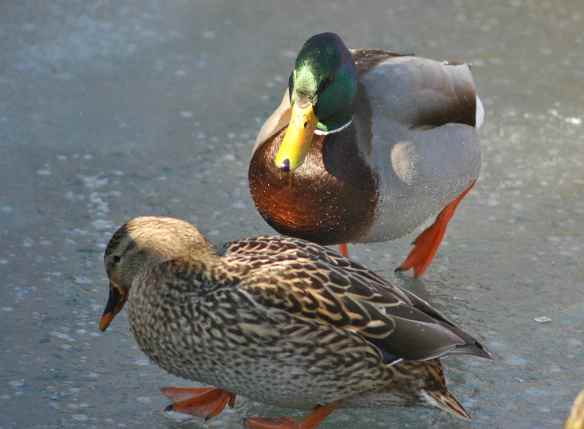 Mallards on ice. (Sounds like an ice-skating show with duck costumes, doesn’t it?) 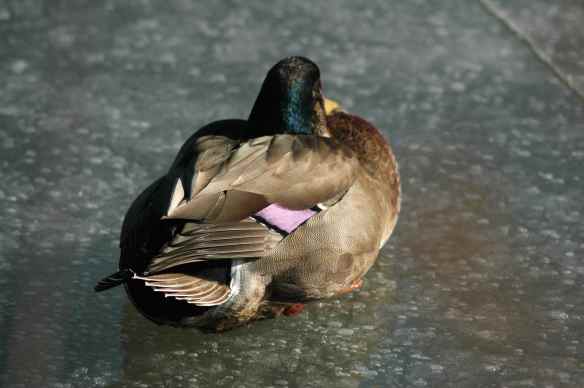 Unknown duck on ice. (Sounds like a mixed drink at an avian-themed bar, maybe?)

Of course, just because they’re standing on the ice doesn’t mean they aren’t melting it. Maybe they melt little footprints in the ice and then move to another patch of ice. 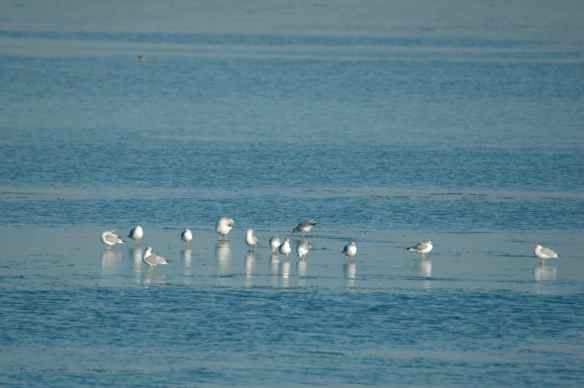 Maybe these gulls have created the ice island they are standing on by melting all the surrounding ice with their feet.

If you stood on ice in bare feet, you would melt the ice. If you tried to do that for a long time, you would get frostbite and tissue damage and then you would not have working feet anymore. To melt ice, you have to put enough energy into it to raise its temperature above freezing, plus some bonus energy to get it over the phase change from solid ice to liquid water. Because water has a very high specific heat—i.e., it takes a lot of energy to raise its temperature—melting ice requires a lot of energy. For an animal to melt ice with its feet, all of that energy would have to come from the animal; and unless it was a very small amount of ice and a very big animal, that animal would get very cold.

Ducks don’t melt the ice they stand on. Duck feet are designed to leak as little heat into their surroundings as possible—they use counter-current exchange to accomplish this—and this is essential, because if they spent winters regularly losing enough energy to melt ice, they would die. 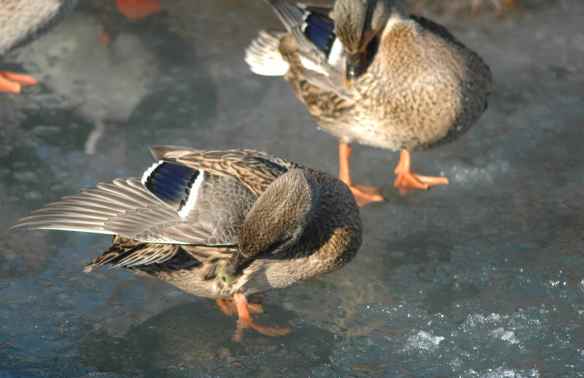 Female Mallards are relieved that their feet are not responsible for melting this ice.

So that’s feet; but there’s more to waterbirds than just feet. They put their whole lower bodies in the water. 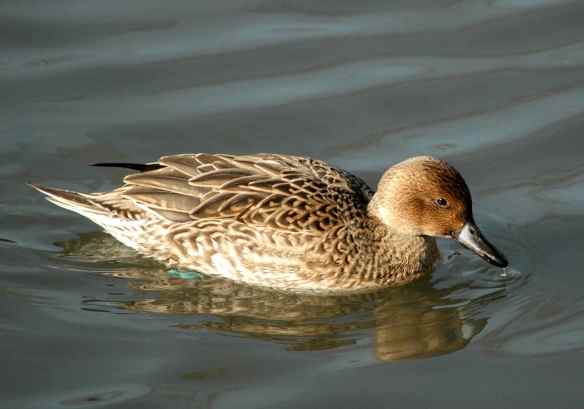 Sometimes they put even more in the water. 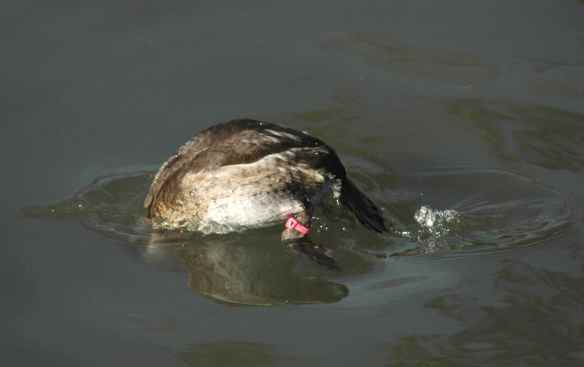 Could the body heat from their bellies/heads/etc., plus their feet, warm up water and melt ice? Well, technically, yes: ducks do lose body heat while in the water (about 20% more heat is lost from swimming ducklings than ducklings standing on land [Van Sant & Bakken 2006]), so they are warming up the water a tiny bit; and given a small enough amount of water and ice, and enough ducks, you could probably melt some ice. 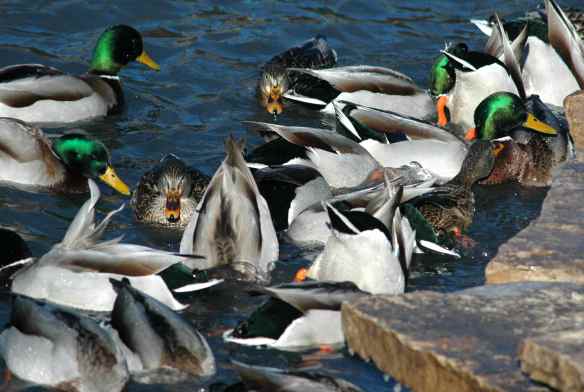 You would need something like this, but more so, with less water.

But in any natural environment, the amount of heat the birds lose will be too little to affect ice to a visible degree. Birds can’t afford to lose much heat in the winter, and they have evolved very effective insulators in their feathers. Ducklings lose almost the same amount of heat through their feathers to the water as they do to the air—which is pretty amazing, considering how cold water can suck heat away! 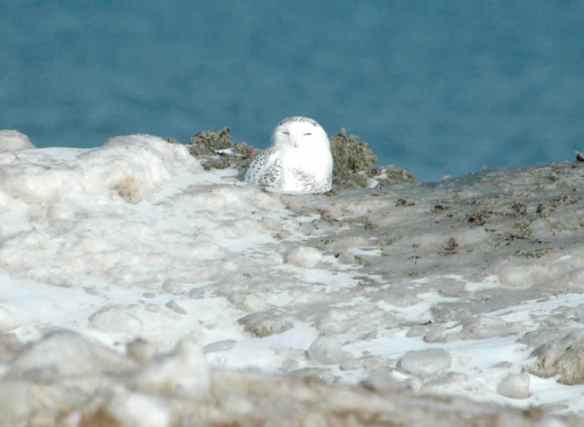 This Snowy Owl’s insulating feathers let him sit on this pile of snow without worrying about melting a puddle in it.

The body heat from a normal-sized group of waterbirds would not be able to melt ice in any realistic natural setting.

It is possible that the presence of waterbirds might either prevent ice formation or speed its disappearance in a different way. Birds don’t just sit in water, after all. 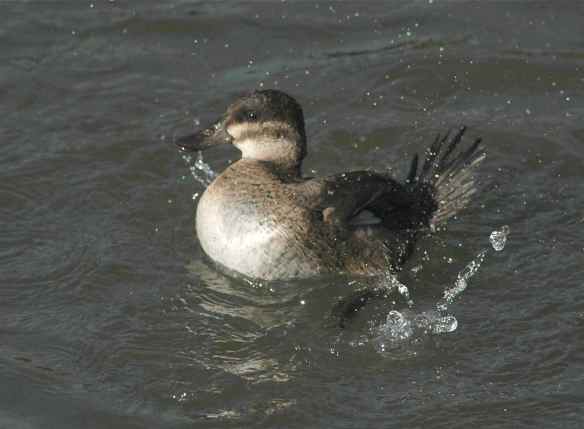 They paddle, and dive, and splash around. Ice can’t form in water that is constantly moving, so a flock of active birds could potentially delay part of a pond from freezing over. Too, turbulence caused by ducks could stir up the warmer bottom layer of water, bringing it into more contact with the surface ice and perhaps very slightly speeding up the melting of the ice. So maybe a flock of waterbirds could cause a small decrease the amount of ice on a pond.

Of course, none of this works if the ducks decide to hang out on land… 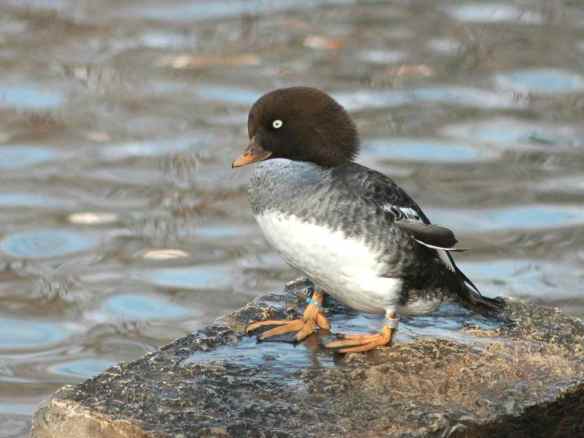 11 thoughts on “Could ducks in the water melt ice?”