Last night, my university’s campus suffered a power outage, possibly due to the theft of copper grounding cables. Everyone—well, everyone not trapped in an elevator—was ordered to evacuate campus, which turned out to be a good call, because a backup generator then exploded, spitting flames two stories high. (No one was seriously injured.)

My scientist colleagues and I, while worrying about the trapped elevator people and the explosion, had one more thing to sweat over: our samples. If the freezers in our building go down, they can take years’ worth of research samples with them. One of my labmates had just returned from the field the previous day, and all of her summer of work was potentially thawing out that night. 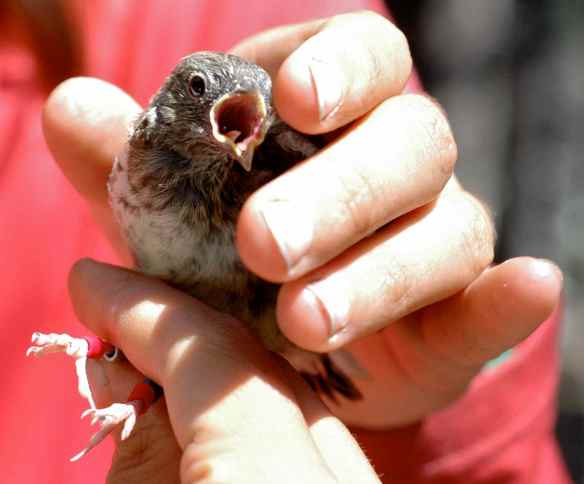 Today, the country has a government outage. The government shutdown is already having widespread effects, and these will only worsen if it continues. I am lucky in my experience of the shutdown compared to most people: I am not losing the food stamps I depend on or the wages I have earned, for example. But the effects are still shocking. This morning I received this email, from the government office that issues banding permits and bands to people like me who band birds to study them: 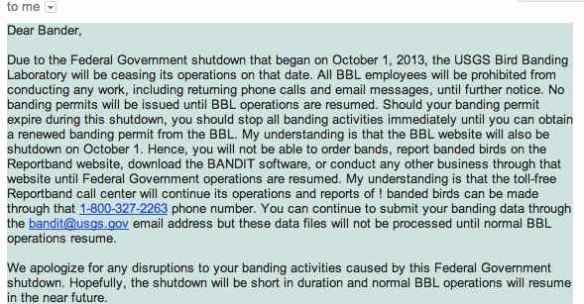 The gist is, almost all functions of the lab are suspended. This includes processing banding permits, so if your permit expires before the shutdown is resolved, “you should stop all banding activities immediately.” This means no new bird studies.

That’s not great. Did you know I’ve been preparing a big important grant proposal for the NSF that should be due Oct. 10th? The grant proposal preparation website is FastLane; it’s gone. Anyone else preparing any kind of grant application is in the same boat. NSF can’t even tell us what will happen once the government resumes because NSF is shut down; “NSF will issue guidance” is the only reassurance it can give.

Of course this isn’t a surprise: this is what government shutdown means. But just because it’s predictable doesn’t mean it’s not damaging for science.

Remember the campus power outage I was talking about? Fortunately, after much nail-biting and anxious texting, it became clear that some of the scientists and staff who were still on campus when the outage occurred had made sure that any samples not in a freezer on back-up power were moved to freezers that were. In the end, almost no damage was done. I lost a few PCR reactions that were in thermocyclers at the time of the outage; my labmate’s samples were all safe. Enormous thanks go out to the people who saved the day for UC Berkeley biologists.

We didn’t cause our power outage, but we dealt with it. Now it’s time for the government to deal with the crisis that it did cause.

12 thoughts on “Shutdowns and outages: when infrastructure fails science”