I got back from our first bout of field work yesterday, and I can say that if things keep going the way they did, we’re going to be banding a lot of juncos this year. That is excellent: the more we band, the more we can identify individually by sight, allowing us to observe the behavior of each. It’s much more informative to be able to say “KARL chased RRAY” than “one junco chased another junco”. Too, when we band them we also take measurements and pictures, so we can relate their behavior to things like condition and size.

GILA had an unusual white feather on the back of his head.

One of the things you notice quickly when handling lots of birds is how different they all are. Not only do they differ in things like markings and leg size, but each responds to being handled differently: some are stoic; some flutter; some are calm except when their legs are handled; some chip softly; some bite. 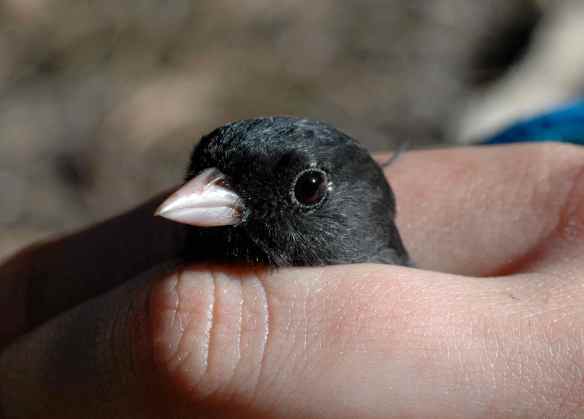 GRAM had a few white feathers just around his eyes.

Right now all I know about these birds is their capture location and the measurements I took, but as the season wears on, I’ll know the extent of their territories, the sound of their song, and—if they and I are lucky—the identity of their mates and the numbers of their chicks.

I’m only back for a few days; I’ll spend much more of the next several months in the field than at home. The juncos don’t stop doing things, and I have to be there to observe them! I’ll try to schedule blog posts for when I’m gone, but if there’s a gap in posting, you’ll know why: I’m in the woods watching juncos. 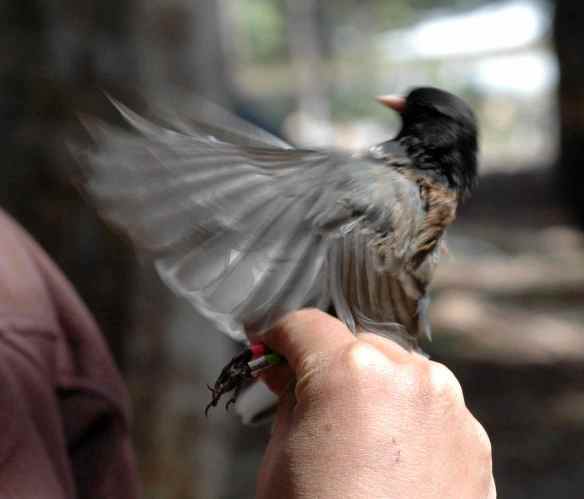 P.S. Keep an eye on the “Juncos banded (2013)” counter on the right side of the blog home page; I’ll update that count every time I get back, so you’ll know just how many juncos we can now individually identify.