A few weeks ago, one of my officemates and I were discussing how dangerous it is to be a baby bird when he mentioned that among the creatures that will eat young birds—rodents, deer, ants, slugs—are Western Scrub Jays. “I’ve seen them hunt down and eat young fledglings,” he said. So when, this weekend, I saw a scrub jay pecking at something small and cheeping, I dropped my grocery bags and ran.

The victim was a young fledgling, probably no more than a day or two out of the nest. He cowered on the ground when I reached him. I looked around for his parents, but although there were many spectators peering down from the branches—European Starlings, Chestnut-backed Chickadees, Bushtits—none of them seemed upset. They were there to watch a show, not defend a baby. And although I wasn’t sure what species the fledgling was, I could tell he was too big to be a chickadee or a Bushtit, and he lacked the long-faced look of young starlings.

Scrub jays are smart birds, and I knew if I left the fledgling there, he would go right back on the menu. Too, from the way he huddled and didn’t move, I worried that he was injured. I took him home. 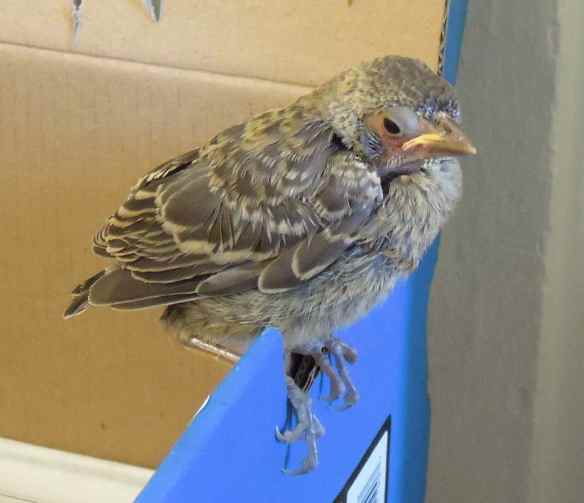 Away from the attentions of the jay, he quickly perked up. He looked a little bruised around the face but seemed otherwise healthy, alert, able to perch and even flutter short distances. When I took him to the local wildlife rehabilitators they said he looked good. He joined their several other fledgling wards to recuperate. There, he will learn to be an adult bird and eventually be released. 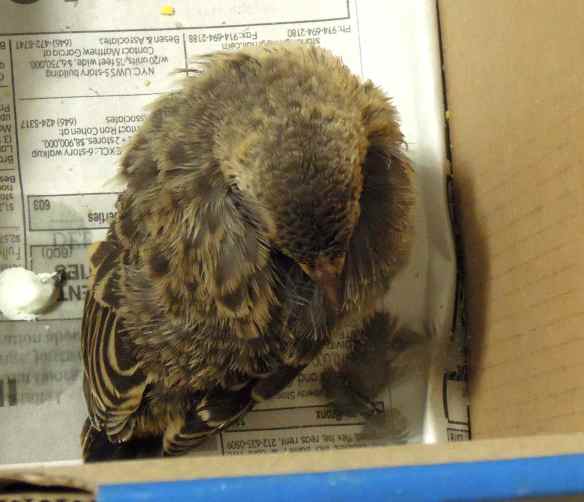 Sleeping. He hadn’t quite figured out the tuck-head-under-wing trick yet. 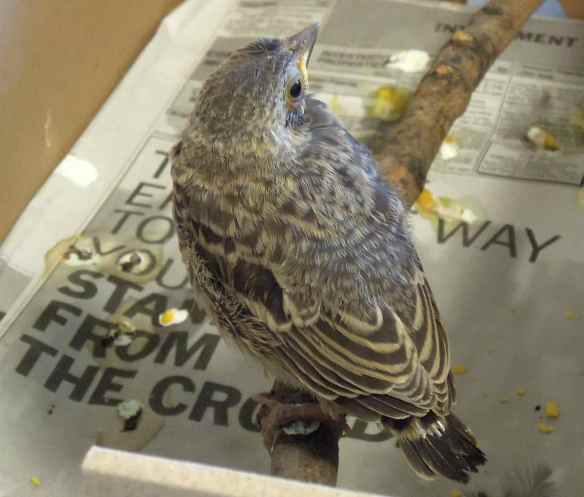 Note his just-growing in tail feathers, still partially in their white sheaths.

So the story has a happy ending! Well, except for the scrub jay, who probably intended to feed the fledgling to her own hungry chicks.

Except… there’s another version of the story. See, before I turned the fledgling (who I called Zed) over the rehabilitators, I wanted to know what species he was, because some wildlife rehabilitators won’t accept invasive species (European Starlings, House Sparrows, pigeons). So I did some internet searching. Zed, it turns out, is a Brown-headed Cowbird. 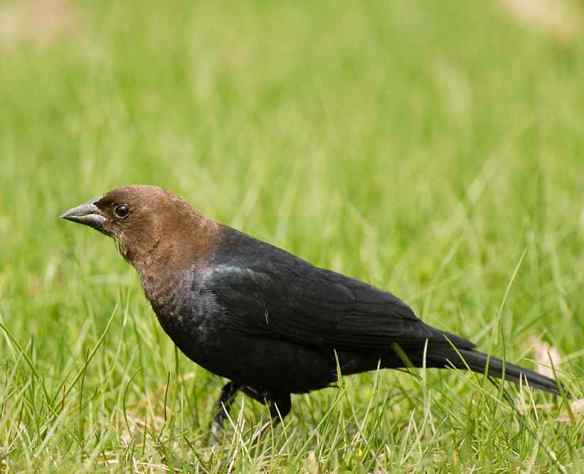 What Zed will look like when he grows up, if he is indeed a “he.”
Photo by M. LaBarbera 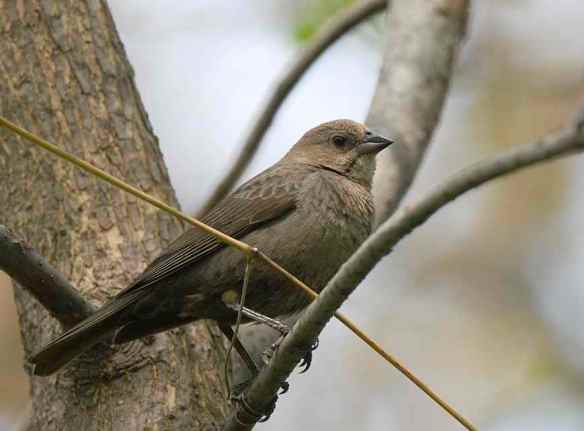 What he will look like if he is actually a she.
Photo by M. LaBarbera

So here’s another version of Zed’s story:

His mother watched the birds around her, noting where they put their nests and when they started laying. When they were away, she quickly darted in to the nest, laid her own egg among theirs, and left. Some of the time, this worked: birds are under strong pressure to accept any eggs that are in their nest, because the cost of rejecting their own eggs by accident would be terrible, and the eggs that are in their nest are their own eggs – most of the time.

Zed developed quickly in his egg, racing to beat his foster siblings. He probably hatched first, giving him an advantage in getting food from his foster parents. He got more food than any of his nestmates, and grew faster and bigger than them. Some of them may have starved because of him. Even if they all lived, they certainly got less food and were less healthy than they would have been without him. 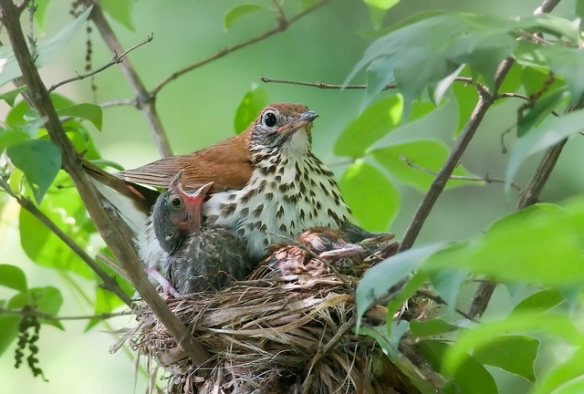 Then one day, Zed’s large size and his loud begging call caught the attention of a scrub jay, and he was almost lunch. Instead, he was picked up by me, and now he continues to receive parental care from a species that isn’t his own: humans.

What species cared for him before the scrub jay found him? I don’t know. Any of those spectator birds could have been his foster parents—although their lack of distress at his peril still makes me doubt it. But the most likely thing, based on what cowbirds seem to do in that area, is that he was in a junco nest. Zed probably took food from the bills of baby juncos. 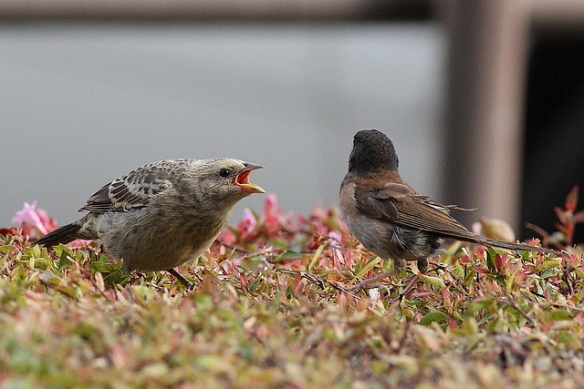 It’s hard not to be a bit upset about this. Brown-headed Cowbirds are cheaters, lazy and destructive to all the hard workers around them; they’re the grasshopper in the tale of the grasshopper and the ant, if the grasshopper had stolen all the ant’s hard-earned food for itself and survived the winter while the ant starved. They leave their babies in the nests of strangers without a backward glance; they cause the nestlings of their host species to starve; their strategy isn’t even sustainable, since if they succeeded too often, their host species would go extinct and they would have no one to raise their babies for them. The technical term for what they do is “nest parasite,” and there’s a reason it’s an ugly term. 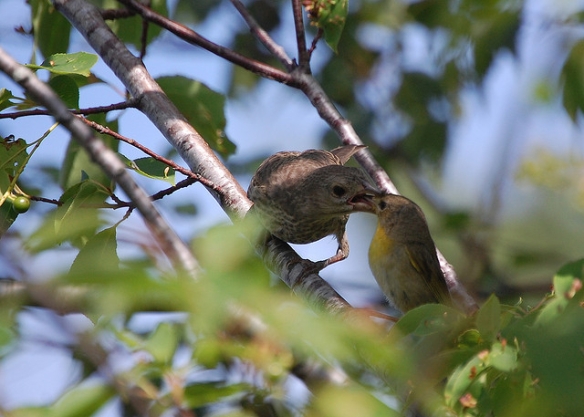 But… can you blame a species for existing? Their strategy works. They work hard at it, in their own evil way: they have to find many, many nests at the right time, and they have to lay many eggs, since the success rate isn’t great. Nest parasites have a lot of neat adaptations that I’ll write about in the future (because this is already a long post!). One of the big ornithological mysteries used to be how nest parasites know what species they are, since they may never see another of their species growing up. They work hard at being lazy.

And you can’t really blame any individual cowbird for being a cowbird. It’s not Zed’s fault that, at a species level, he’s a jerk. He’s just a hungry baby bird.

Besides, how could you resist this face: 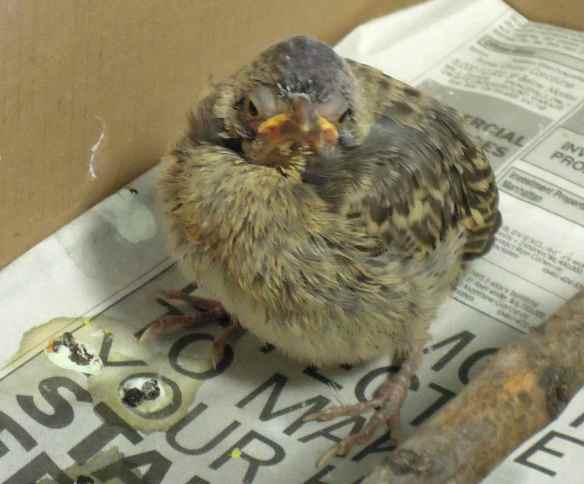 11 thoughts on “A heartwarming story, sort of”