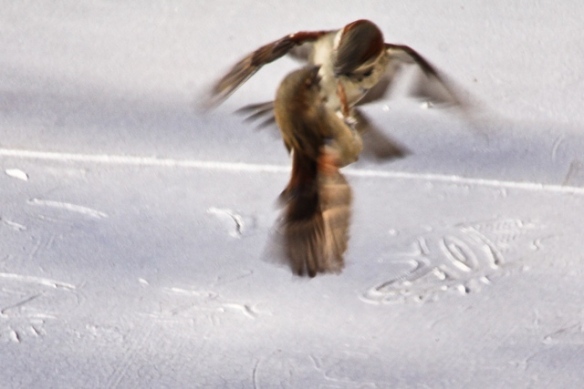 All that fighting takes a lot of time and energy, not to mention risk of injury. So the birds (and many other resource-defending animals) have found a less-dangerous shortcut: instead of fighting, they wear “badges of status,” color markings on their body that stand for how tough they are. Birds with less-tough badges don’t bother challenging the tougher birds, and everyone has to fight less. Sounds great, right? It’s the equivalent of a football player wearing a jersey that says “I’m Tougher Than You,” and the other football players just leaving him alone. So much less violent!

… but it doesn’t seem like it should work, does it? If it did, then anybody could put on a jersey that says “I’m Tougher Than Everybody” and win the Superbowl. What stops the birds from lying?

The issue of honesty is a big deal in animal communication (and probably regular communication, too!). Any signaling system that can be “invaded” – that is, successfully subverted – by liars will not last very long. “Very long” in evolutionary terms might be hundreds of generations, though, so we always have to consider the possibility that a signal is invadable and just hasn’t been eliminated yet.

One way to keep badges of status honest is to make them impossible to fake, in the same way governments are always making money with microprinting and fancy fibers and little clear windows in it (I’m looking at you, strange New Zealand money). These unfakeable signals are called “handicap signals.” A bull moose bearing a towering chandelier of antlers has to be just as tough as the size of his antlers proclaims, because carrying something that heavy on your head and still being healthy is really hard. A young or weak moose would be foolish to take on that burden, since the potential reward would be far outweighed by the increased risk of dying. 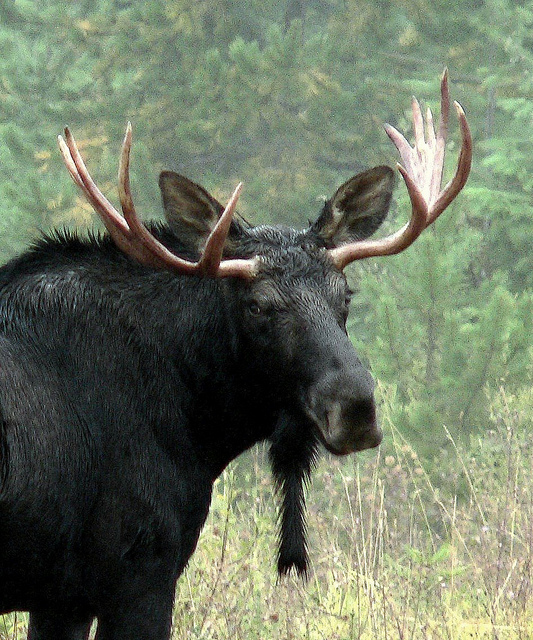 This is not a very tough moose.
Photo by Gary Beck

But the badges of birds like House Sparrows are not handicap signals. A House Sparrow would have no physical problem covering his entire chest in a huge dark badge. Instead, honesty in badges is enforced through social interaction.

The key is that the males fight rarely, but not never. They use the badges to figure out who they have a chance of winning against, and don’t waste their energy taking on an opponent too far out of their league. If you’re a pretty weak male wearing a weak-male badge, like this guy:

…then you won’t be able to claim a very good territory, but you also won’t be challenged by very tough males. The males who do challenge you will be similarly weak, so you’ll have a chance of beating them, and at least won’t be seriously injured. And you can probably coexist peacefully with much tougher males, since they will see that you aren’t a threat.

However, if you have a big tough-guy badge, like this bird:

You talkin’ to me?
Photo by Alexandra MacKenzie

…then you’re going to be challenged by birds like this one: 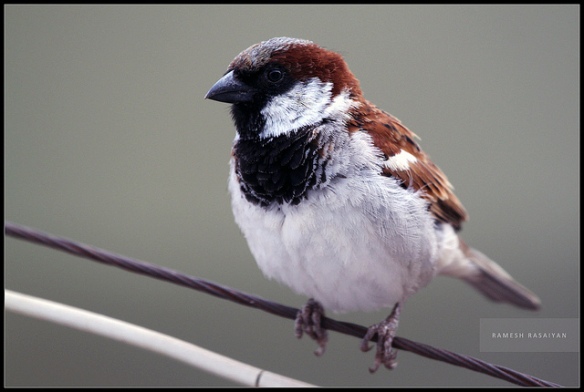 Those birds will be tough, and you do not want to fight them unless you’re tough too, because you will get beaten up. You might be able to lie for a little while, but since the badge is effectively claiming, “I can handle fighting birds that are this tough,” and birds that are that tough will indeed fight you, you would be foolish to wear a bigger-than-honest badge. Soon you would be foolish and injured. And you would lose your territory, because the actual tough birds would take it from you.

So show the big-badged House Sparrows some respect. They’re not lying.

This is based on a ton of both theoretical and experimental animal communication work. I’m not going to track it all down to cite it now – sorry, but I’m pressed for time – but note that this is not my work, this is other people’s great work.

8 thoughts on “Badges of status, or, keeping House Sparrows honest”