The birds of paradise have been getting a lot of attention lately for the elaborate courtship dances of their males, and nobody is going to argue that they don’t deserve it. But it isn’t all “males dance, females judge” in the avian world. The displays of male birds of paradise reflect high reproductive skew: a few males mate a lot, a lot of males never mate. It’s worth it to the males to devote incredible amounts of energy and resources to attracting females, because if they’re successful, they may sire many chicks. They can afford to spend all that energy and resources on crazy feathers and tricky dance moves because that’s all they have to do, parent-wise: they don’t help females build the nest or incubate the egg or raise the chicks. 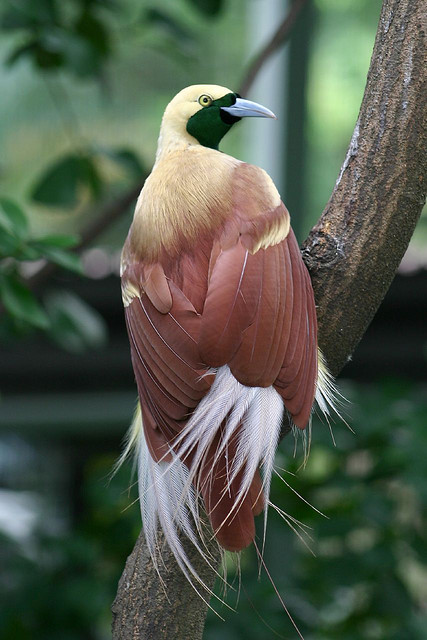 But birds are diverse; the birds of paradise reflect just one point on a spectrum of mating systems. Near the other end are birds with low reproductive skew. Males of these species look pretty much like the females, and they contribute about equally to parental duties. You might expect that these species would lack dances the same way they lack meter-long curlicue tailfeathers, but some of them have dances every bit as formalized and elaborate as the birds of paradise. The difference is that these dances are duets. 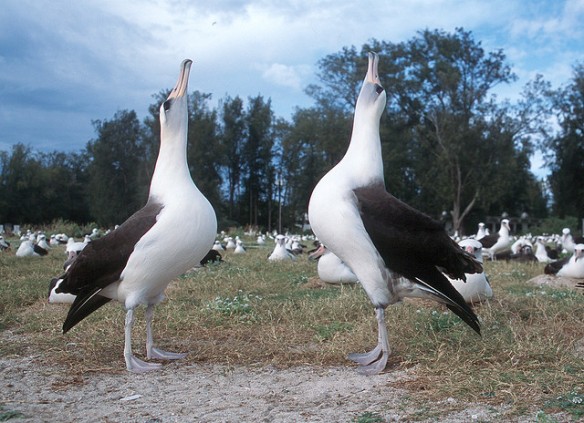 (Note on videos: I know clicking on videos is annoying. But it’s worth watching the videos in this post, I promise.)

Albatrosses are large, long-lived birds, and they “mate for life” – as much as anyone does; which is to say, they more often stick with the same mate than don’t. They cooperate raising a single chick, which is a lot of work because that chick is large and slow-growing. Such close parental cooperation requires a strong pair bond. In order to establish the pair bond and to keep it strong, pairs perform the kind of dance that can only be done by performers with good coordination, flexible necks, and beaks that go clack. Here is a pair of Waved Albatross dancing. Make sure you have the sound on!

It isn’t always pairs, either – here is a trio of Black-footed Albatross dancing. You can see, though, that the dance seems to have been choreographed for a pair: one of the trio keeps having to be subbed out. These may be nonbreeding birds practicing their dance moves; or they may be a breeding pair dancing with a third bird, which sometimes happens.

Dances are similar among albatross species, but not identical. Species differ in whether they touch bills before beginning to dance, in whether they extend one wing or two, in whether they perform moves simultaneously or alternately. Performing the dance well requires coordination and experience – much like rearing a chick, which, after all, is what they’re auditioning for. 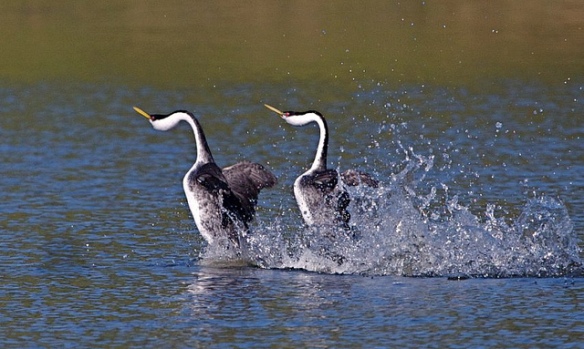 Like albatross, male and female grebes cooperate to raise their chicks. Instead of one large, slow-growing chick, they have multiple relatively fast-growing chicks – which must be carried around on the parents’ backs for several weeks after hatching. This is a considerable time investment, and the parents must work together to back-brood the chicks and feed them.

Grebe pairs perform their courtship duets on the water. Here are the high-speed Western Grebes, with David Attenborough narrating and some weirdly meditative music. Here are the head-shaking, rearing Great Crested Grebes (start at 0:45), with some even stranger music.

Kind of makes you wish that the waltz involved running on water, doesn’t it? Or at least some good beak-dueling.

12 thoughts on “Bird dances for two”