You’ve gone to peek at a nest. For a moment, all the little feathered heads regard you with large, dark eyes—and then in a flurry and a tumble they are out of the nest, running every which way along the ground, and their parents are scolding you and swooping among their babies in apparent panic. Oh no! Will the babies be okay? 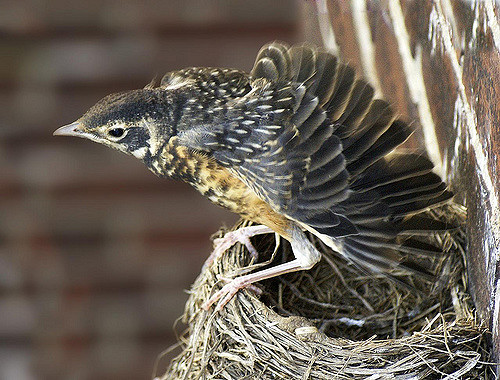 This is possibly the question I am asked most frequently. Sometimes the inquirer has managed to catch a few of the babies and replace them in the nest, only for the babies to promptly hop back out. Other times the babies have swiftly vanished, and the inquirer—often someone who has watched the nest over the course of weeks, growing attached to their fluffy neighbors—is left, quite suddenly, with silence and absence and a gnawing guilt.

Baby birds fledge—leave the nest—when it is safer for them to be out of the nest than to be in it. If they are undisturbed, they may stay in the nest for a long time, growing out their flight feathers so that when they do fledge, they will be mobile and able to escape predators. However, they are able to leave the nest much earlier, if they are disturbed. Juncos, for example, may stay in the nest as long as 15 days after hatching; but if something scary disturbs them, they can wobble-run out of the nest as early as day 7. Baby birds may perceive a peeking human as a potential predator, and decide to flee rather than wait and see if the human is planning to eat them. When fledging occurs due to human disturbance, we call it “force-fledging.” 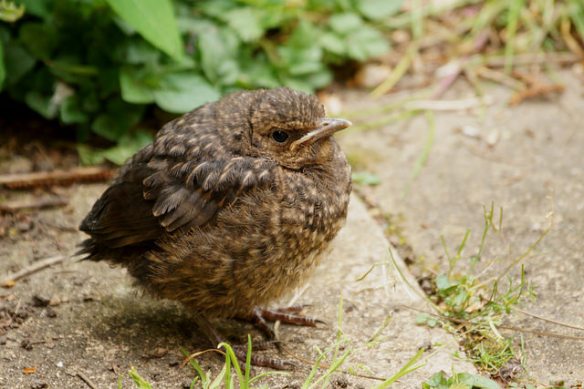 Ornithologists have been worried about force-fledging for a long time, because no one force-fledges more baby birds than ornithologists. It’s an unavoidable byproduct of searching for, and checking on, hundreds of nests: sometimes a nest is older than you expected, or the babies are more on-edge than usual, and you accidentally force-fledge the nest. In the case of my junco field work, this presented me with a dilemma: I needed to band and collect blood from the babies, and they needed to be a certain minimum size for that—8 days old, at least. If I banded them at 8 days, they were usually little enough to stay in the nest afterwards; but sometimes they decided to fledge, and then they were out there, fledged, at a fairly young age. Alternatively, I could wait until they were just about ready to fledge anyway—13 days—at which point they always fledged after we banded them, but at least we knew that they were just about at fledging age anyway.

For a long time, there was no way to know how bad force-fledging was. The babies fledged, and you hoped they were okay. Recently, however, the development of tracking technologies small enough to be attached to baby birds has allowed researchers to find out exactly what happens after baby birds are force-fledged.

Streby et al. (2013) were radio-tracking baby Ovenbirds and Golden-winged Warblers to find out what affected their survival. The researchers weren’t planning to study force-fledging; but, just like my juncos, their baby birds sometimes fledged after the researchers had attached the transmitters, so they ended up with data that let them ask that question. They had some baby birds who force-fledged at earlier ages than they would naturally fledge; some babies who force-fledged at the usual fledging age; and some babies who didn’t force-fledge, but fledged naturally later at the time of their own choosing. The transmitters allowed the researchers to track the survival of all of these babies. 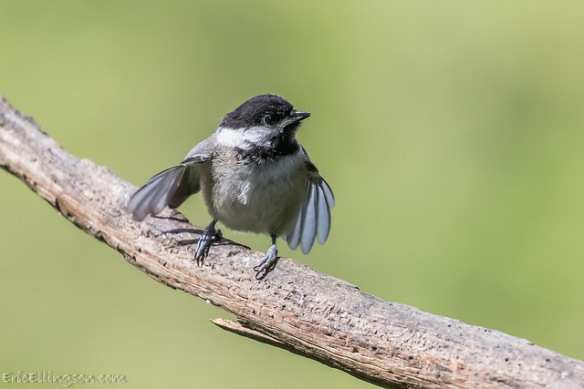 This doesn’t mean that you should go around force-fledging all the baby birds you can find to increase their survival. Rather, the researchers interpret this as showing that the baby birds who force-fledge are ready to fledge, and the ones who don’t, aren’t. The force-fledged babies, then, were further along in their development—more ready to leave the nest—than the babies who didn’t force-fledge. Babies who are further along in their development at a given age are inherently more likely to survive, and force-fledging doesn’t seem to do any major harm to them.

Because we are super tough. (Photo by Robin Horn: https://www.flickr.com/photos/powerkey/)

There are some caveats to this finding. Crucially, the researchers were only moderately disturbing the baby birds: they handled them and attached transmitters, but strove to minimize the birds’ stress and put them back in the nest afterward. Their results will not necessarily apply to baby birds who force-fledge due to a major disturbance, like an attacking dog or a roaring leaf-blower. Too, the researchers did not attach transmitters to any very young baby birds: their “prematurely force-fledged” babies were still fairly well-grown, with feathers and working legs. A major disturbance that causes very young babies to fledge—like the cow who trampled one junco nest I monitored—will definitely reduce the survival chances of those babies.

But if you peeked at a nest, and the babies bolted? They were probably ready to go, and their survival chances are probably not any worse for your peeking. You don’t need to feel guilty. (You do need to make sure that any pet dogs or cats you have are kept away from the area for the next week, while the babies are still grounded and vulnerable to predators.)

Don’t be ridiculous. I am vulnerable to nothing. (Photo by Guttorm Flatabø: https://www.flickr.com/photos/dittaeva/)

16 thoughts on “You scared baby birds out of their nest, oh no! Will they be okay?”