Science requires careful planning, foresight, and scrupulous attention to detail. Everything must be controlled so that the variables of interest can be examined. One mistake could bring everything down. Only with years of training can someone hope to add to our body of knowledge.

But if you take all of that too seriously, you’ll spend all of your time planning and theorizing rather than looking—and the most important part of science happens when people just start looking.

Peder V. Thellesen is a dairy farmer in Denmark. He has no formal scientific training. Evidently he loves starlings: he started banding them and observing their nests in 1971 and continued to do so every year, in nestboxes on his own farm and on his neighbors’ farms. 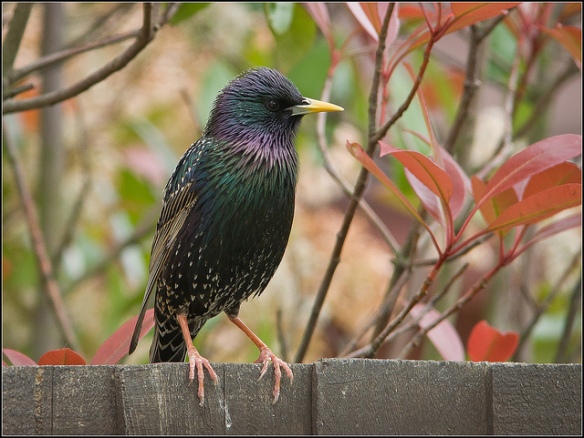 It’s easy to see how you might fall for that gorgeous plumage. Photo by Phil McIver, reproduced from flickr under a Creative Commons license.

His 45 years of observations have just been published in a Danish ornithology journal (with a summary in English, fortunately for me). He banded 12,450 starlings altogether and made detailed observations of more than one thousand nests. He found that the starlings’ egg-laying dates advanced by one day every five years, correlated with the rise in average temperatures in April.

He surely could not have known, in 1971, how pressing a question animals’ responses to climate change would be in the future; but because he started observing, and kept observing, he has collected one of the best datasets on long-term trends in breeding in the world. As a letter-writer in Nature notes, his study is longer than any funded research program. Such long-term studies are almost impossible to carry out: no one funds more than a few years of a project at any one time, and “We might have really amazing data in 20 years!” is not going to persuade any grant committee. And yet we often find that the data we most need in long-term data: only this kind of information can show how animals respond to gradual changes like climate change and habitat alteration, and we are increasingly aware that you cannot substitute ten 3-year studies for one 30-year study. We desperately need 30-year studies—which require that someone had, thirty years ago, decided to start one and kept at it. Peder V. Thellesen did. 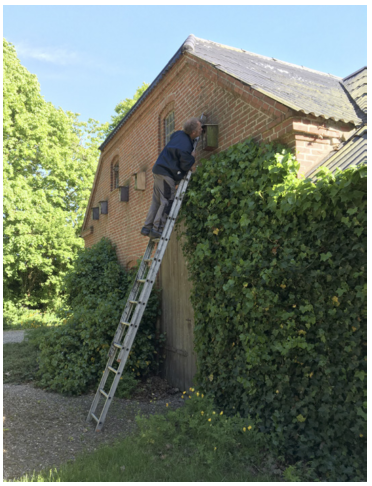 Thellesen’s study is an ode to foresight—or to the knowledge that we will never have perfect foresight, so we might as well start observing now and trust that the value of those observations will be revealed in time. Another recently-published study is an ode to plain old sight: the ability to look at what is right in front of you and say “This is exactly what we didn’t know we needed.”

The researchers in this study were interested in how birds are affected by artificial light at night. The lightening of the nights has been one of humanity’s most dramatic effects on the earth, and it can have severe consequences, particularly for animals that need to navigate at night. Planet Earth II devotes a heart-rending segment to baby sea turtles following artificial lights to their deaths. We have all seen moths lured in by lights.

This gecko in Costa Rica is actually fine with artificial light at night: the moths come to the lights, and he eats them.

The ideal set-up for studying the effects of light on migrating birds would be to have huge lights that could be turned on and off during migration season. This set-up, they realized, already existed: it was New York City’s “Tribute in Light,” two columns of intense light (created with 88 searchlights) that are illuminated every September 11th to honor the memories of those who died in the attacks of September 11th, 2001.

The Tribute in Light seen from afar. Photo by andrewmurray, reproduced from flickr under a Creative Commons license.

The Municipal Art Society of New York, which runs the light installation, agreed to turn off the lights occasionally to allow the researchers to observe how the birds’ movements were altered. The researchers observed the birds during the light installation for 7 years and documented dramatic effects of the lights: when the light beams were on, birds were attracted to them. Birds approached the beams and then circled around within them, apparently trapped within the light, calling loudly. When the lights were switched off, the birds quieted and dispersed, presumably continuing on their migration. 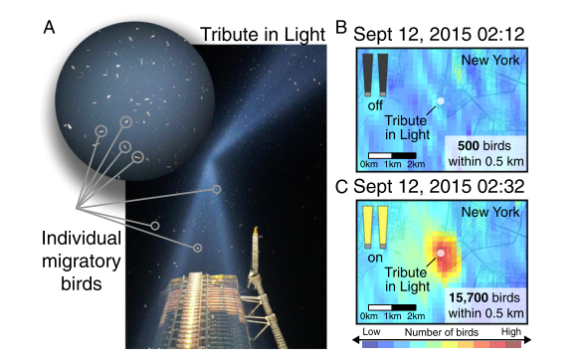 Fig. 1 from Van Doren et al. 2017, showing birds within the light beams and the differences in bird density when the lights are on vs. off.

These results are significant for two reasons: they show how important it may be to reduce illumination at night to protect migrating birds, and they show that even temporary shut-offs of lights can mitigate the effects, allowing the birds to move on.

Science involves a lot of careful planning; but that shouldn’t prevent anyone from keeping their eyes open. You never know when you might spot an opportunity to add to our understanding of the world—whether that opportunity is huge beams of light sweeping into the sky, or a dairy farm with good places to put nestboxes.