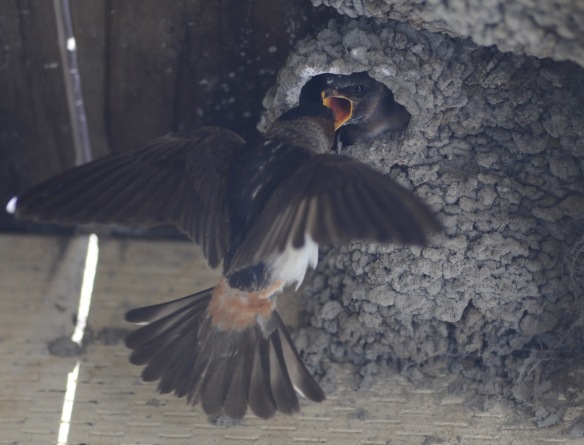 The baby bird says “FEED ME!!” but it doesn’t know that you’re not this momma Cliff Swallow.

One of the veterinarians at the animal rehabiliation hospital recently lamented to me that so many animals she sees are “killed with kindness.” The most common problem by far is that of feeding baby birds. Well-meaning rescuers find a baby bird in need; they search the internet and find statements like “Baby birds must be fed every hour or they will die.” Terrified that the bird will starve before they can get it to the animal hospital—maybe the hospital is closed for the night; maybe it’s a 40-minute drive away—they feed the bird. It makes intuitive sense that babies need to eat, after all. What is not intuitive to us is how easy it is to fatally injure a baby bird by feeding it incorrectly.

“Nowhere on the internet says ‘It’s okay to not feed baby birds for a while, they won’t starve,'” the vet said. “And then they come in fed on milk or something, because the internet said that was a good idea, and they die.”

So: It is okay to not feed baby birds for a while. They will not starve in the several hours it takes to get them to the animal hospital. They will not starve overnight if you find them at 6pm and the animal hospital doesn’t open until 9am the next morning. Baby birds expect to fast the night: their parents sleep, after all. The risk to the bird of starvation is much smaller than the risk of a human trying to feed it without the necessary expertise. 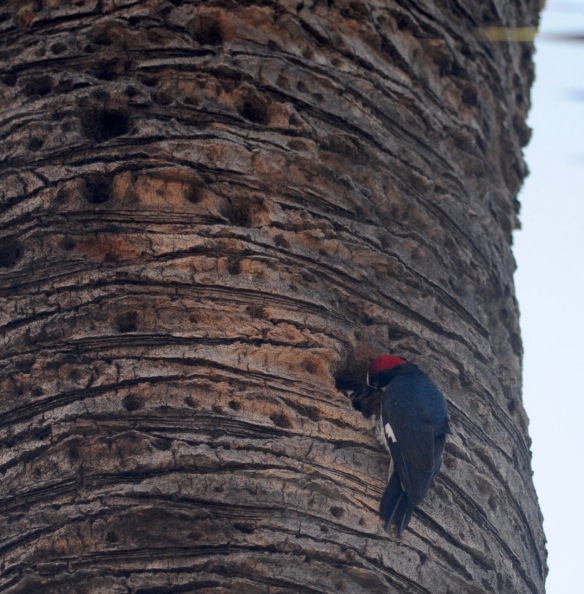 I think the reason that internet resources generally emphasize that baby birds need to eat frequently is that they want to discourage people from thinking that it will be easy to raise a bird. This is a good impulse, and is true to an extent: at the animal hospital we feed the youngest birds every 45 minutes during daylight. That’s because 1) we know exactly what to feed them, and 2) we know exactly how to feed them. In the hands of someone without that knowledge, a one-time fast is much, much safer for the bird than an attempt to feed it.

A few weeks ago, I came across a recently fledged hummingbird who was not yet able to fly upwards. It had gotten itself onto the ground of a gas station on a busy city street. There was little vegetation around and nowhere safe to put it that I could see. After some agonizing—it’s always better to leave a fledgling where it is, if you can—I decided to take it to the animal hospital rather than let it continue hanging out on the concrete with so many cars driving past. 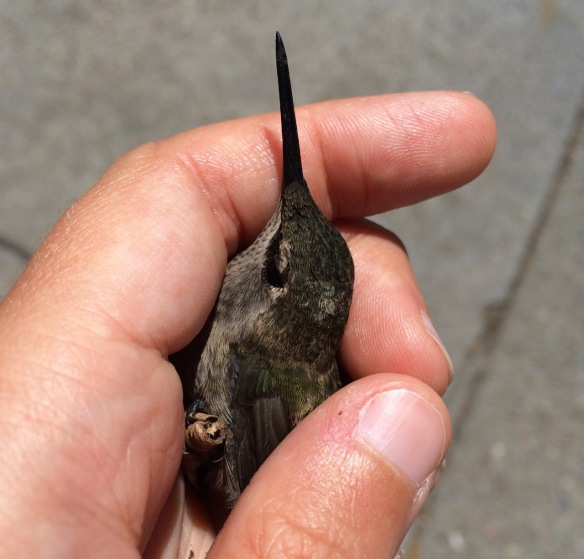 Gas stations are not good hummingbird habitat, little one!

“Shouldn’t you feed it?” A friend asked me as I got my car keys. “I heard hummingbirds have crazy metabolisms. They can starve to death so fast.” It was a compelling thought. Hummingbirds do have very fast metabolisms, to the point that they have to enter a state somewhat like hibernation simply to avoid starving during cold nights. The drive to the animal hospital was 45 mins, and I had no idea how long the hummer had been fasting before I found it.

But the animal hospital, on all of its pamphlets and websites, says: Don’t try to feed the animal before you bring it in. So I didn’t. I drove the bird up, and when I dropped it off, the volunteer who accepted it asked if I had tried to feed it anything. “No,” I said, feeling obscurely guilty, even though I knew I’d just been following instructions. Not feeding a baby animal feels mean. But: “That’s perfect,” she said happily. “That’s what we want. I’ll get him some food right away.”

A week later, the hummingbird—healthy and now able to fly—was released.

Even though it feels mean, don’t try to feed a baby bird if you have an expectation of getting it to a rehab facility within a few hours (or overnight). The baby bird won’t know to thank you, but you’ll know that you’ve done a good thing: quite probably, saved its life. 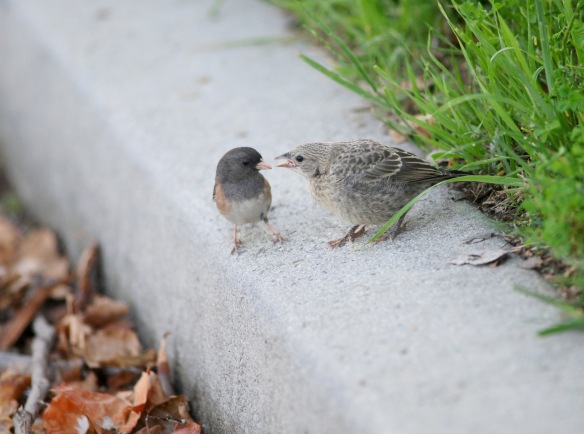 Momma junco is maybe getting tired of feeding her giant baby (who is actually a cowbird).

(I know the blog has been focusing a lot on if-you-find-a-baby-bird posts lately; if you miss the more sciencey content, I apologize, and I promise there will be more of that too! This time of year I get a lot of Help I found a baby bird commenters, and I’m always hoping that this blog can help them and maybe counteract some of the misinformation that’s out there on these topics. But my favorite thing is still the science of animals, and that will continue to be the main the focus of the blog.)

30 thoughts on “Animal hospital vet: baby birds will not starve if you don’t feed them for a few hours”