A birder’s brain responds to photos of familiar bird species in a way that is, neurologically, “strikingly similar” to the way that anyone’s brain responds to photos of familiar human faces (Tanaka & Curran 2001): birders seem to use a similar strategy to recognize birds as everyone uses to recognize people they know. If you are a birder, this probably isn’t surprising; certainly, to me, recognizing a bird species feels similar to recognizing a friend. And it isn’t only birders: the study also looked at “dog experts”—which I did not know existed before I read this—and found the same pattern when those experts looked at photos of dogs. If you are passionate about models of cars or architectural styles or garden flowers, I wouldn’t be surprised if you experience the same thing.

(Bafflingly, the study reports that the photos it showed to the birders included “the robin, sparrow… oriole… [and] hawk,” none of which are actually individual species. Which sparrow, guys? Didn’t you talk to your birders at all while you were studying their brains?) 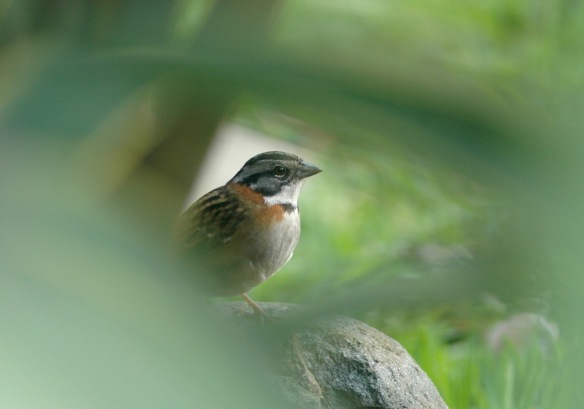 What about unfamiliar bird species? Like an unfamiliar face, a new bird can be hard to process at first—what should you be focusing on?—and, in me, produces a very strong desire to identify it: to put a name to the face, so to speak. I love finding a species in my bird guide for the first time, and I am bothered when I can’t identify a bird to the species, even when the bird guide says something consoling like “Almost impossible to distinguish in the field.”

I am even more bothered when the bird was identifiable, but I missed the crucial mark: say, I was focusing on the white spots when I needed to be looking at the culmen. This is why I love my camera when I’m in new places. Even a blurry photo is often enough for a solid identification, and you can go back to it again and again, checking yourself.

This terrible photo let me ID this Spanish bird as a Woodchat Shrike. I never got close to the bird before it flew away. Without the photo, I wouldn’t have gotten an ID.

This has been my unquestioned strategy when birding new places ever since I got a lens long enough to photograph birds: photograph everyone, ID later. Recently I’ve had a chance to re-examine it. On the first day of an eight-day trip to Costa Rica, which I had never visited before, my camera broke.

Forced to use only my binoculars, I rediscovered a few things. Binoculars, aided by your eyes, adjust quickly: you are much more likely to catch some here-and-then-gone bird in your binocs than in your camera. When, on the first day, a stunning hummingbird flitted into the middle of a trail and then instantaneously dematerialized, I was fumbling with my camera and didn’t get a chance to appreciate it; I was only able to identify it later as a Violet Sabrewing because there was only one all-purple hummingbird in the bird guide. Later in the trip, a tiny kingfisher flashed past me at an appreciable fraction of light speed in a blur of green and rufous, and I was able to spend that half-second really looking, rather than trying for a photo.

On the other hand: I saw the bird, and saw enough of it to call it an American Pygmy Kingfisher, but I don’t have a photo to put here for you.

Okay, yes, I can show you this photo by Jorge Montejo from Flickr*. But it’s not the same!

When you can’t take a photo, birding a new area is a serious memory game. You don’t have time to look at the bird guide to see what field marks will be critical: the bird could fly at any moment. You stare, trying to memorize everything—or, if it’s a flycatcher, simply despairing. Once the bird has flown away, it’s to the book, to think Oh no, there’s a whole page of black-and-yellow Euphonias, or Aah, all the parrots are green! When you manage to identify the bird, you feel like you’ve snatched a victory from the mists of your own rapidly-fading memory.

Not that identifying a bird isn’t sometimes anticlimactic. When I caught a brief glimpse of this bird, I repeated to myself, sparrow-like with a bright orange bill until I could get out the guide.

What did the guide say? Orange-billed Sparrow. Thanks, guide; I somehow already knew that.

Most fun was the dawn birding, when I might have to juggle six or more new species of all shapes, sizes, and colors in my head before I could get to the guide. It felt like a game and a puzzle: something challenging, but also something that my brain was good at.

Sometimes identifying birds from photos is a puzzle too. Here is another hummingbird I saw on that first day, before my camera broke:

There is no shortage of green hummingbirds in the Costa Rica bird guide. That white spot behind the eye helps, but still: with this photo, I was stumped.

The key was one out-of-focus photo, out of dozens of better ones.

It isn’t a good photo, but it shows his throat, with its telltale glimmer of red above blue: this is a Fiery-throated Hummingbird. I would not have identified this bird without this photo. Later in the trip, without my camera, I saw green hummingbirds that I was never able to identify.

And sometimes you catch funny moments, like this very grumpy Great-tailed Grackle with her very needy fledgling: 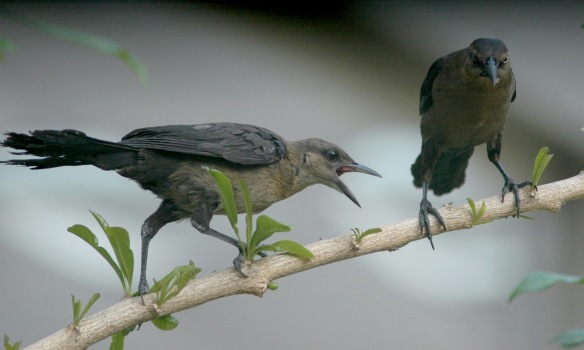 When you bird a new area, do you favor camera or binoculars? Do you try to use both? And do you ever wish that it was socially acceptable to take photos of human faces, rather than just being expected to remember them?

8 thoughts on “Birds as friendly faces”