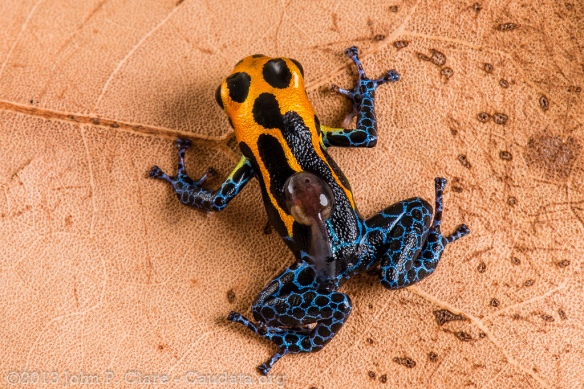 You can find poison frogs at zoos, aquaria, and some museums now: tiny and colorful, often hard to see in the vegetation-rich tank until— oh! all those little blue things, that’s them! They’re so pretty! You watch for a while, and they sit on their leaves unmoving, doing accurate impressions of the plastic toy frogs being sold in the gift shop, until you get bored and move on to the next exhibit.

They have a secret: they have rich lives full of interesting behaviors. They just aren’t interested in doing those behaviors in front of you.

For example: did you know that frogs are nature’s greatest huggers? 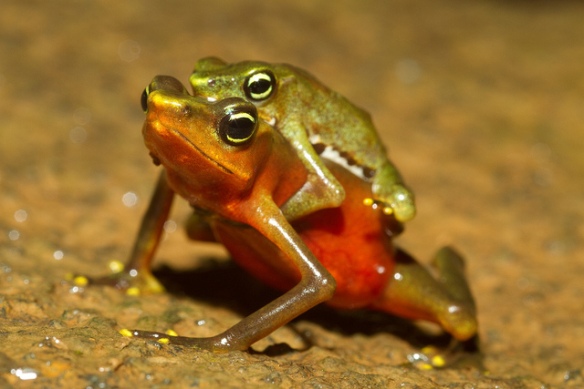 If this looks suspiciously mating-related to you, well, yes, it is: the little male, on top, is holding on to the female so that whenever she decides to lay her eggs, he’ll be right there to fertilize them. Nevertheless, until she lays her eggs, this frog behavior—called “amplexus”—is basically a long, one-sided hug.

The end goal of amplexus is fertilized eggs; but then what? The world is a dangerous place for yummy frog eggs. One strategy might be to lay lots and lots of eggs, and just hope a few survive; many frogs do this. Some frogs have gone a different route: what if you lay a few eggs, but then protect them—say, by hiding them somewhere without many predators, like on a leaf up in the canopy, or on the ground in the leaf litter?

That’s fine for a while: the eggs are hidden, and their jelly-like covering protects them from drying out. The parents may even guard the eggs. Eventually, however, they hit a problem: those eggs want to hatch out into tadpoles, and tadpoles need water. 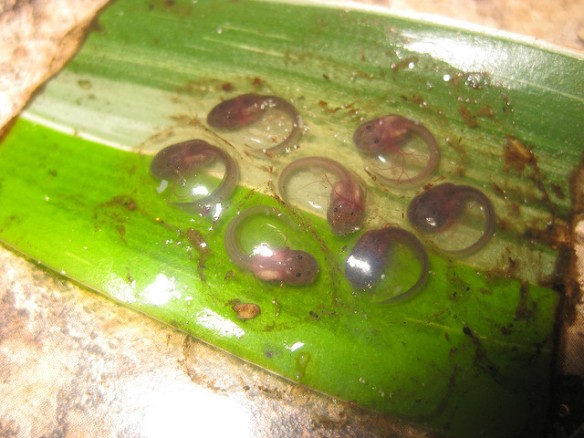 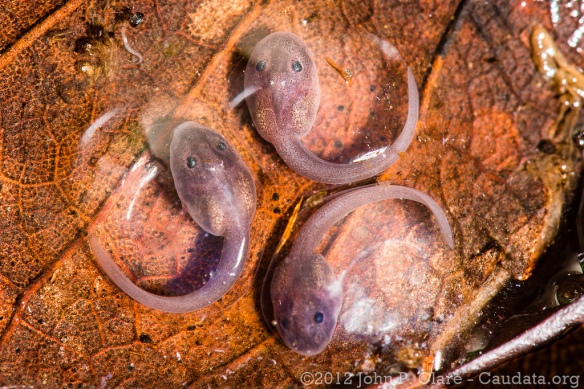 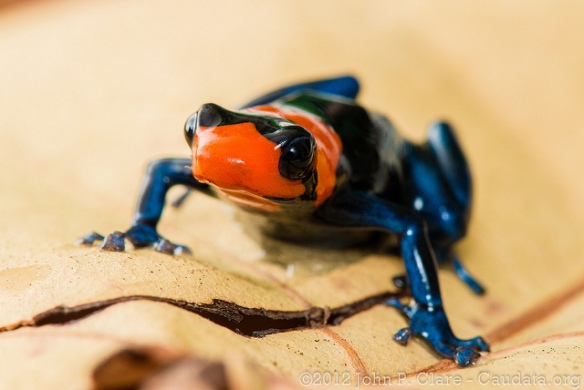 Adult Ranitomeya benedicta: what are you going to do with your tadpoles? Photo by John Clare*

Why, now it’s time for those piggy-back rides, of course! The parent frogs—usually the males—carry their tadpoles to water. 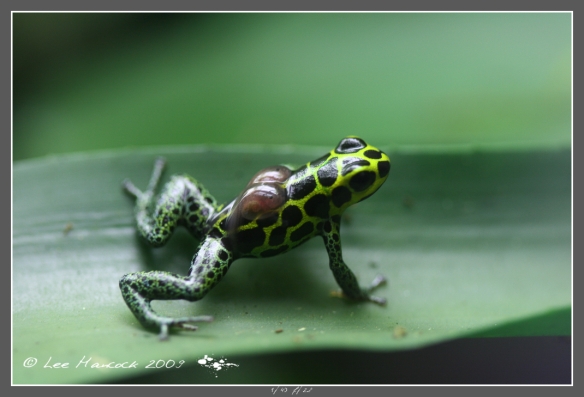 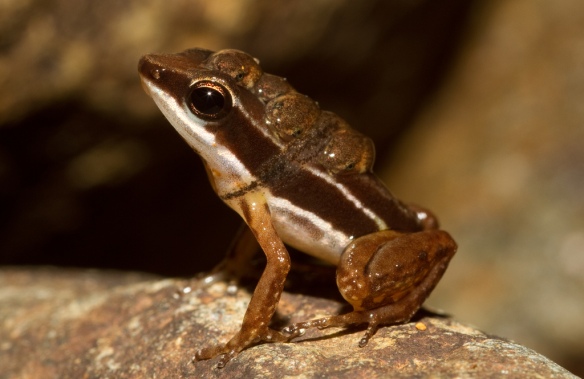 Silverstoneia flotator male with tadpoles. Look closely and you can see the tadpoles’ tiny, adult-like eyes. Photo by Brian Gratwicke* 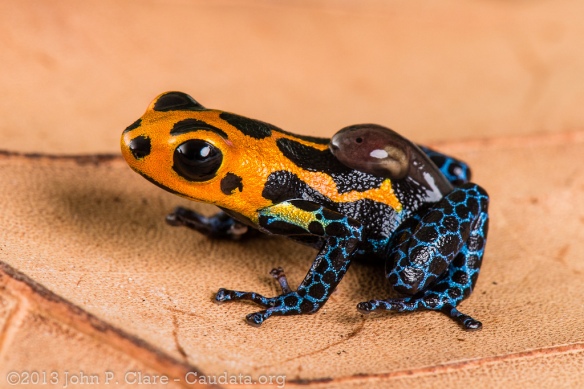 Some frogs carry their tadpoles to a stream and call it a day. A stream has water and food; the tadpoles still have to avoid being eaten, but as tadpoles they can at least move and grow bigger, unlike helpless eggs. 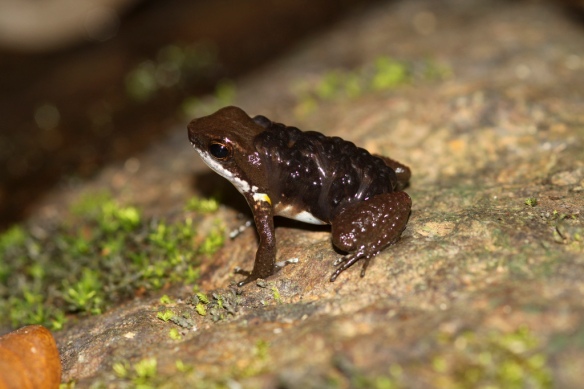 Other frogs take their parental duties farther, and carry their tadpoles to safer water: tiny pools in vegetation, such as bromeliads. (The term for these plant-held pools of water is “phytotelmata.”) These pools are generally safe from predators—unless the parent frogs put more than one tadpoles in a pool, in which case the hungry tadpoles may eat each other. 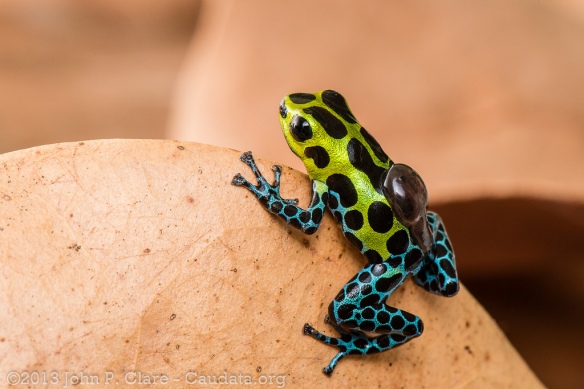 But if they aren’t supposed to eat each other, what are tadpoles supposed to eat in their tiny pools? The frogs have a clever solution to this, too: eggs! When the tadpole begs (did you know tadpoles beg? Now you do), the mother frog lays unfertilized eggs in its pool for the tadpole to eat. Eggs: easy to transport and full of nutrition!

The strawberry poison frog, Oophaga pumilio, puts an extra treat into the eggs she feeds her young: the same alkaloids that make her taste terrible to her predators—which she herself gets from the insects she eats, such as ants—are in the eggs she feeds her tadpoles, so that the tadpoles too are protected (Stynoski et al. 2014). 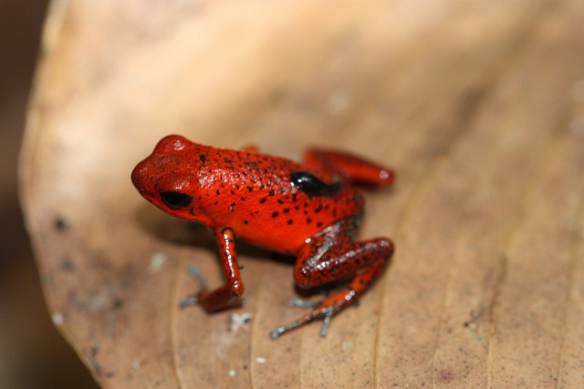 Oophaga pumilio with (tiny!) tadpole. Don’t worry, tadpole: alkaloid defenses will soon be yours, too. Photo by aposematic herpetologist*

Oophaga pumilio also comes in lots of different color variations, which is neat. 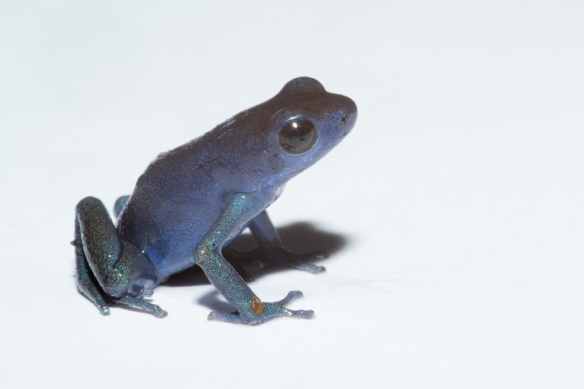 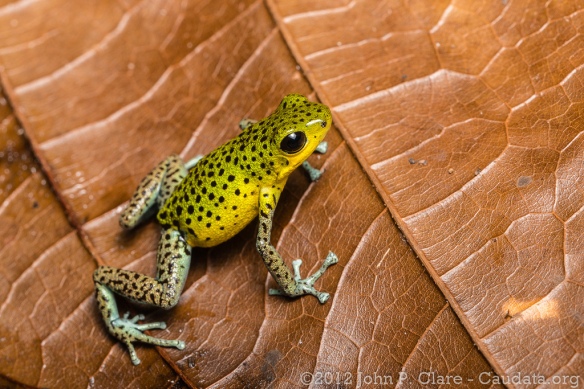 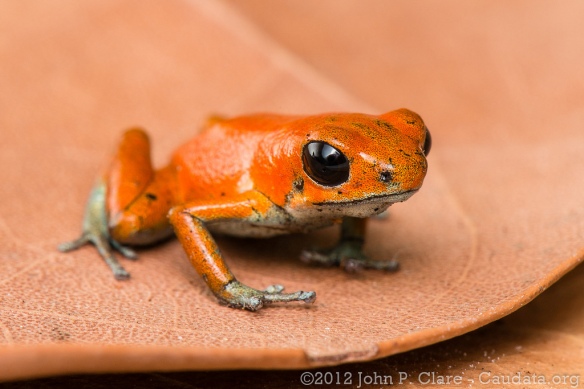 In some poison frogs, all of this parental care starts to look a lot like the biparental care we romanticize in birds and humans: Dad carries and guards the tadpole, Mom feeds the tadpole. One particularly interesting things about poison frogs, in fact, is how variable the parental duties are: in some species, Dad has all the responsibilities; in others, it’s all Mom; and in others, they work together. Recently scientists have started to think that these roles may sometimes be flexible: in Allobates femoralis, males are supposed to carry the tadpoles to water, but if the males don’t, sometimes the female will (Ringler et al. 2015).

It isn’t just poison frogs: frogs in general have a wide variety of parental behaviors. (If you haven’t heard of the Surinam toad, look it up—with a generous attitude, please: it may not be pretty, but it’s how they keep their babies safe!) Glassfrogs guard their eggs, hydrate them and protect them from fungus (by sitting on them), and jostle them around, which may help keep them oxygenated (Valencia & Delia 2016). Glassfrogs have even figured out how to get their tadpoles to water without carrying them: they lay their eggs on leaves hanging above streams, and when the eggs hatch, the tadpoles fall directly into the stream.

Which is all just an excuse to show you some photos of glassfrogs. 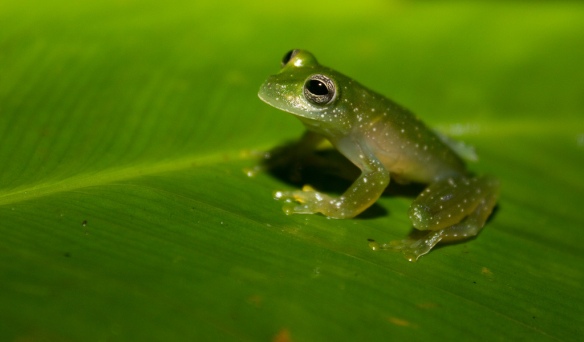 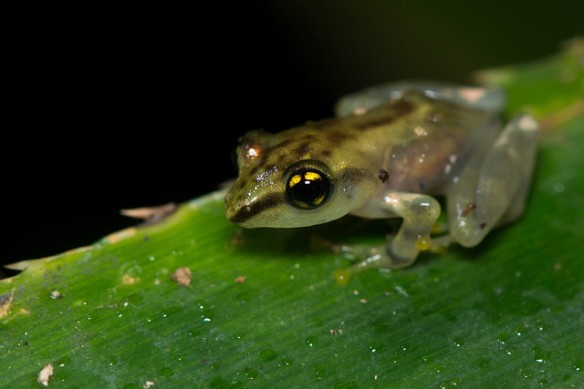 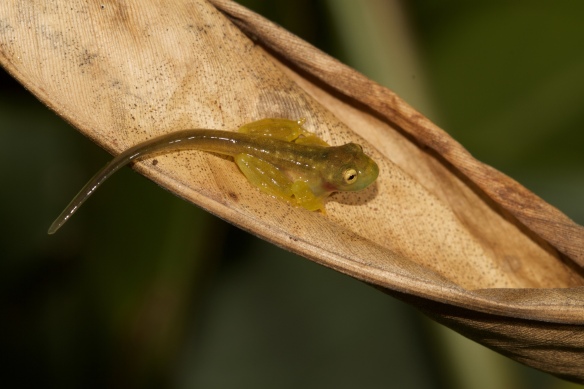 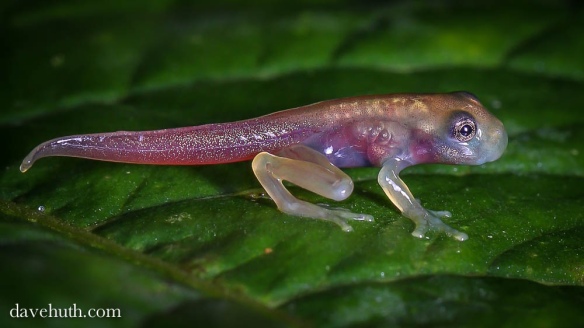 This is why they’re called glassfrogs! Photo by Dave Huth* 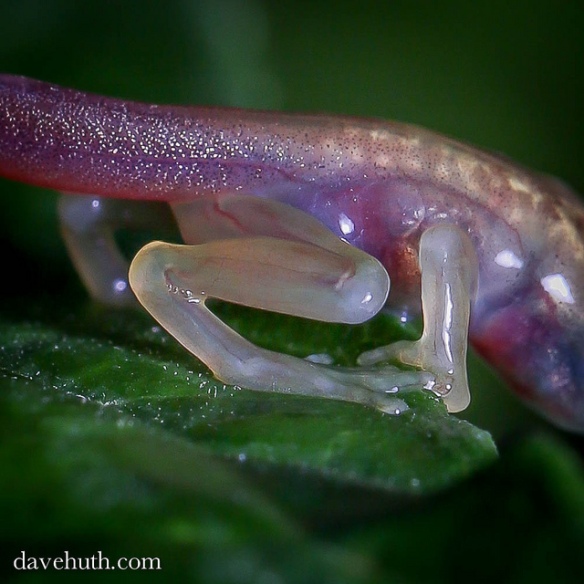 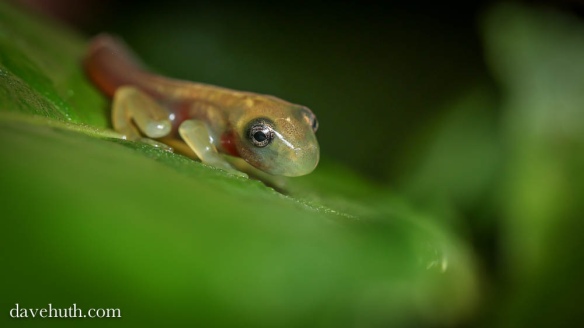