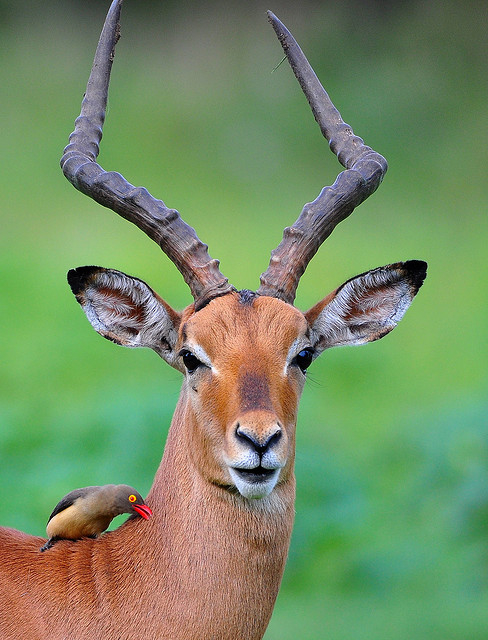 In honor of Halloween, let’s talk about vampire birds.

I am using “vampire” loosely here, the same way people do when they talk about “vampire” bats. These vampire birds are hematophagic (blood-eating!), but do not follow other items of vampire lore: they have reflections in mirrors, can enter your house without an invitation, do not shape-shift, are mortal, and do not sparkle in the sunlight. 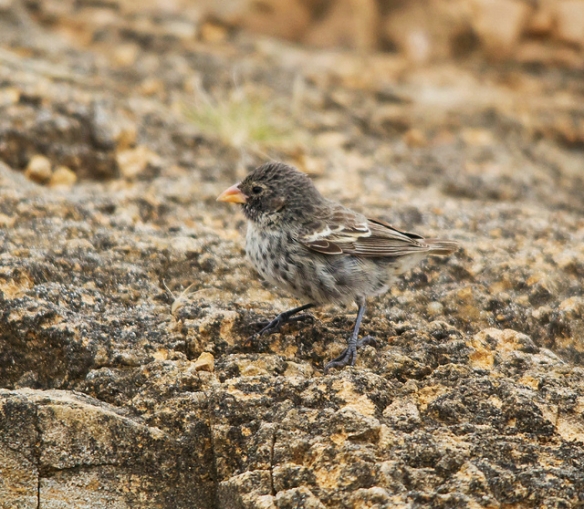 The Sharp-beaked Ground Finch bites and drinks blood from other seabirds, mostly boobies. Individuals on Wolf and Darwin, the vampiric islands, have longer bills than the individuals on other islands, possibly an adaptation for biting their unfortunate victims. 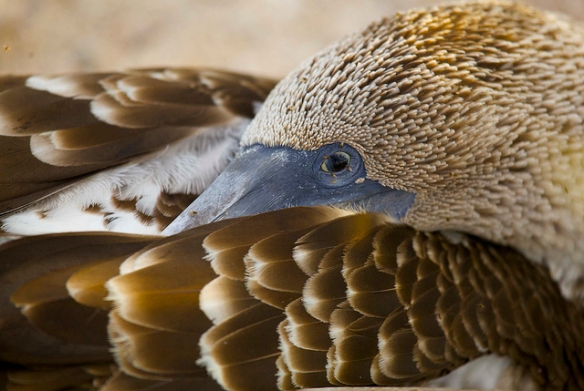 Now I’ll never be able to get to sleep tonight.
(Blue-footed Booby; photo by Benjamin Jakabek*)

They also pierce and eat seabird eggs, another good reason to have a long sharp bill. But before you judge these vampiric, egg-eating finches too harshly, you should know that they live in a very dry habitat where fresh water is scarce: blood and eggs may be an important water source for them. 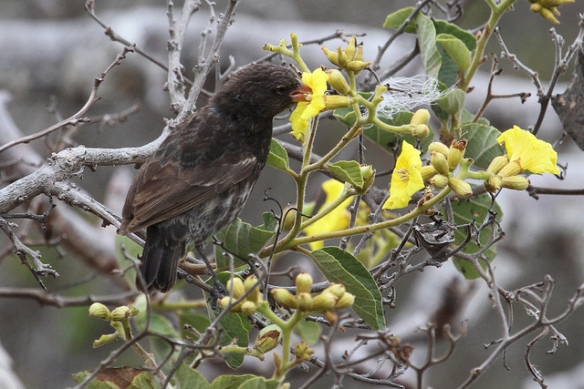 I know what your next question is, and: no, bitten boobies do not subsequently transform into Sharp-beaked Ground Finches and fly around biting more boobies.

Ticks are the worst. Fortunately for large African mammals like impala and oxen, the Red-billed Oxpecker has got their back—or rather, their head, neck, and ears: areas that the mammals have trouble grooming and that also have the most ticks. How nice of the oxpeckers to eat the ticks and help the mammals! 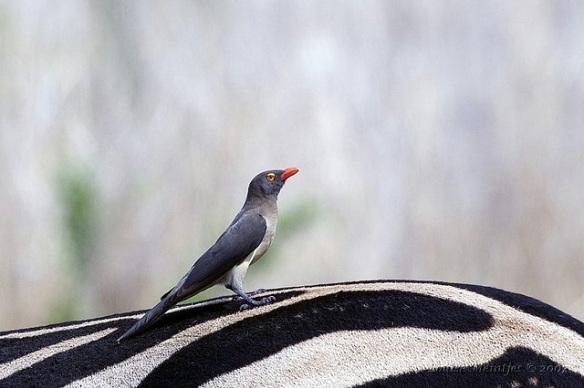 Except… not quite. The diet of oxpeckers “includes ixodid ticks, dead skin, mucus, saliva, blood, sweat, and tears” (Weeks 2000) and although the oxpeckers do eat ticks, they seem to have found the one way to do it that does not actually help their mammal friends out: they eat ticks that have already become engorged with blood.

This is actually a pretty good idea, from the bird’s perspective: blood-engorged ticks will be much more calorie-rich than empty ticks. But from the perspective of an ox, it’s not at all helpful, since once a tick has filled up on blood, the damage is done: it’s already taken blood and potentially passed on one of those lovely tick-borne diseases. Thanks for nothing, oxpeckers! 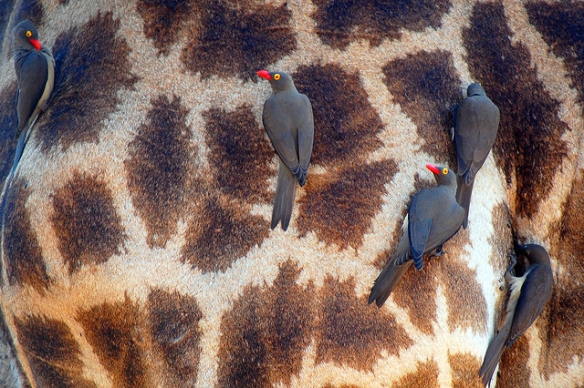 It gets worse. The oxpeckers also find wounds on the large mammals—often these wounds are tick bites—and then enlarge them, prevent them from healing, and drink blood from them. 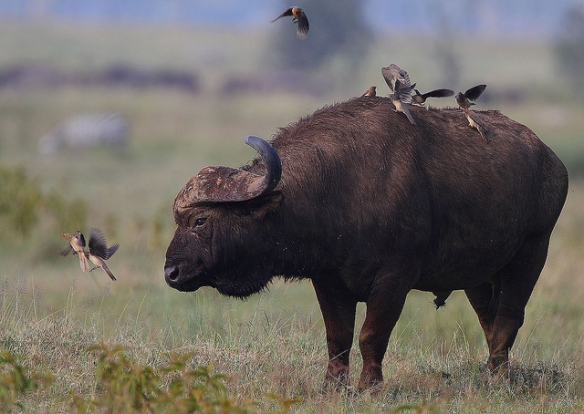 You WHAT? Get off of me!
(Photo by Steve Garvie*)

Also, they eat earwax. My first thought on reading this was, “What an excellent alternative to Q-tips. Where can I get an oxpecker?” but apparently this is probably a bad thing for the mammals, since earwax is energy-rich and presumably expensive to produce. 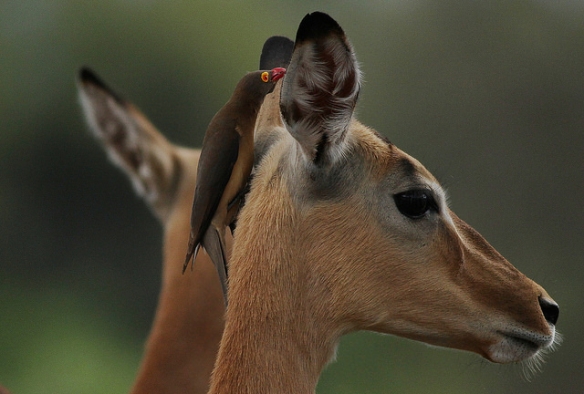 Darn it, bird, that’s MY earwax.
Photo by Derek Keats*

I’m stretching my definitions a bit to include Great Tits. These guys really aren’t vampires so much as they are absolutely terrifying murderers. But they’re creepy, and there are bats involved, and the tits are eating blood (and flesh, and organs, and brains…). 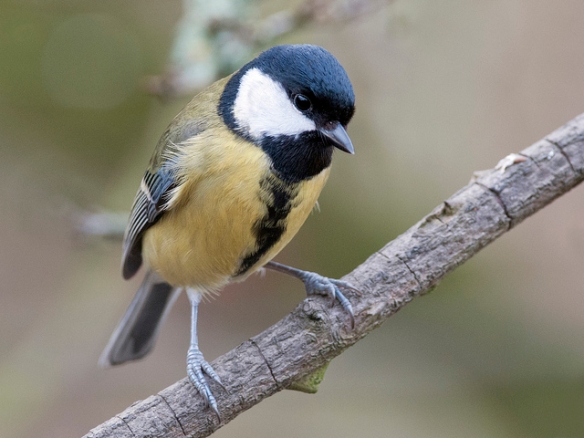 Great Tits in Hungary face rough winters: it’s cold, food is scarce, and they are small birds. Any innovation that helped them get more food in these hard times would be very helpful. So the tits have innovated: they’re eating bats.

Let me be clear here that these are not tiny raptors. These are birds that usually eat seeds and insects. These are cute little black-and-yellow fluffballs with cute little non-carnivorous bills. 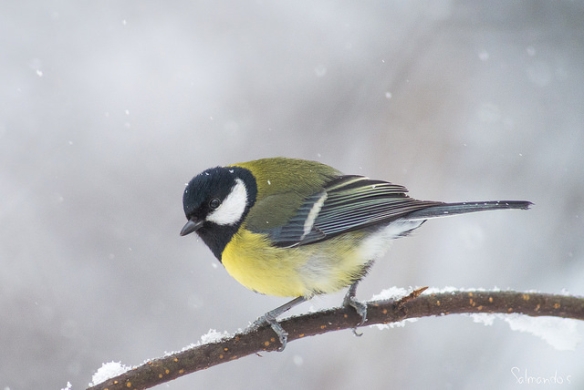 So cute.
Photo by Jyrki Salmi*

But in the winter, they get hungry.

The unfortunate bats make easy prey because they are trying to survive the long winter by hibernating. With their metabolisms slowed down, they’re unable to react quickly to an attack. The Great Tits fly into a cave, find the bats by the high-pitched squeaks that disturbed, groggy bats make, and carry them with their beaks up into trees to eat. The tits eat everything but the skin and bones.

If you offer the Great Tits extra food, they stop eating the bats. They don’t prefer to eat bats; they’re just hungry.

So this Friday, don’t be a zombie or a ghost or an NSA agent. Be a hungry Hungarian Great Tit. They’re much scarier. 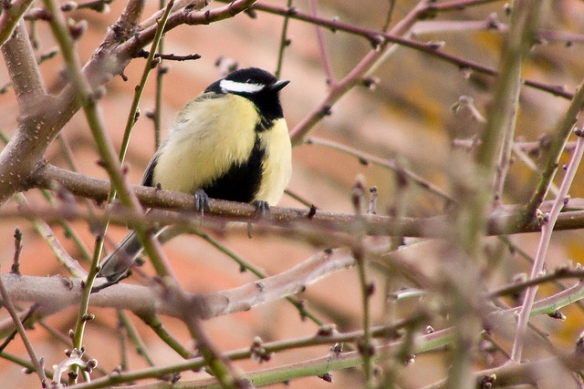