They were strewn all along the beach, these transparent, tripartite things. At first glance they looked like plastic trash, but they felt organic in my fingers. 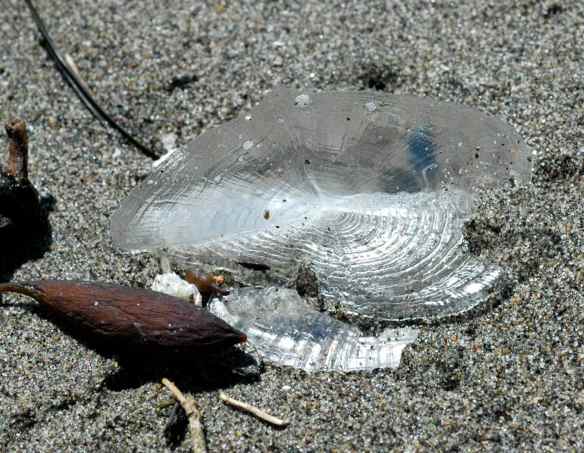 Fortunately I happened to be beachcombing with a world expert on marine invertebrates. “Ooh,” he said, “Velella!”

Velella velella, or by-the-wind sailor: a living sailboat, a jellyfish on a stiff frame. In their preferred state, i.e. when not washed up on beaches, these animals float on the ocean surface with their tentacles just below the water, to catch food, and their upright sails above the water, to catch the wind.

The blue color acts as a sunblock, which is necessary since velella spends all of its time just below in the water’s surface in the glaring sun. The clear part of the animal is a skeleton, a structural frame for the blue, living parts of velella to grow on. 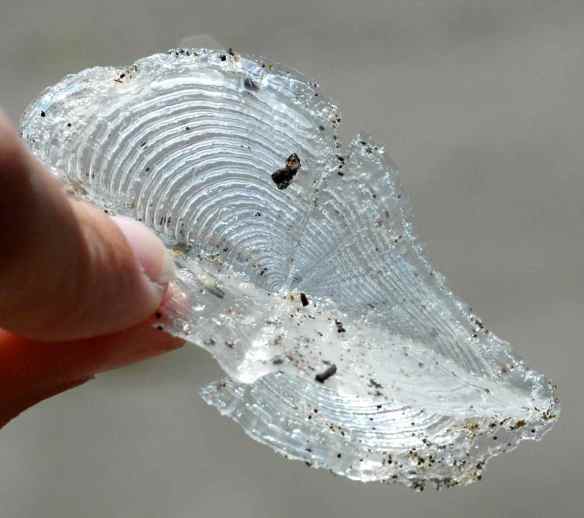 One velella isn’t one animal: like a coral, each velella is a colony of individuals. Different individuals are devoted to different tasks: catching food, digestion, reproduction, defense. What looks like some blue gunk to the naked eye is actually a whole tiny city.

In principle, this set-up is not too different from the structure of what we tend to think of as more complex organisms, like humans: lots of little pieces (cells, for us; polyps, for the velella) specializing in different tasks in order to promote the welfare of the entire thing. The challenge for velella is that it can’t make things that require many cell layers, like organs: it’s restricted to working with flat sheets of cells. It has even figured out how to be three-dimensional despite not being able to have an inside: it puts together two flat, two-dimensional surfaces, the base and the sail. To paraphrase my marine invertebrate expert, these are simple animals who have found a different way to be a complex organism. 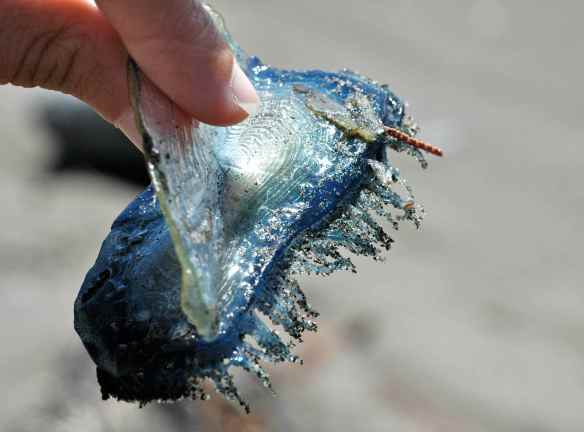 Velella is a hydrozoan, a class of animals that tend to exist, at one stage of life, as colonies of polyps (like tiny sea anemones)—although only velella puts this colony on a homegrown sailboat. (At another stage of life, hydrozoans exist as medusae, which are like small jellyfish.) Hydrozoans are in the same phylum (higher level of classification) as true jellyfish, corals, and sea anemones.

Other animals that float in the water and feed on whatever they catch in their tentacles, like jellyfish, have to spend energy moving around in order to catch enough food. Because of its sail, the velella doesn’t have to spend any energy on motion: the wind does it all.

The sail is built to withstand whatever the open ocean may throw at it. It is built of “relatively floppy material,” presumably so that under strong winds it will bend instead of cracking. However it still needs to be stiff enough to stand upright and act as a sail, so it is reinforced by two sets of ridges, one set radiating out from the center of the base (like a fan), the other set as concentric half-circles (Francis 1985). You can see these in the skeleton below:

But even reinforced, such a sail should be vulnerable to falling over. Imagine laying one sheet of paper flat (for the base of velella) and placing a second sheet of paper on top, edge-wise, for the sail: even if you tape it, that sail is going to fall over. But what if you take the second sheet of paper and bend it in a slight S shape, then tape it to the base? Now it doesn’t fall over nearly so readily. This is what velella does with its sail: the sail has a slight S-shape to prevent falling over in strong winds (Francis 1985). You can sort of see it in this photo:

Strangely, velella exist in two different forms, with different sail orientations: some sail to the right of the downwind direction, and some sail to the left (Francis 1991). If you took a group of them and let them loose, these two forms would head off in different directions. 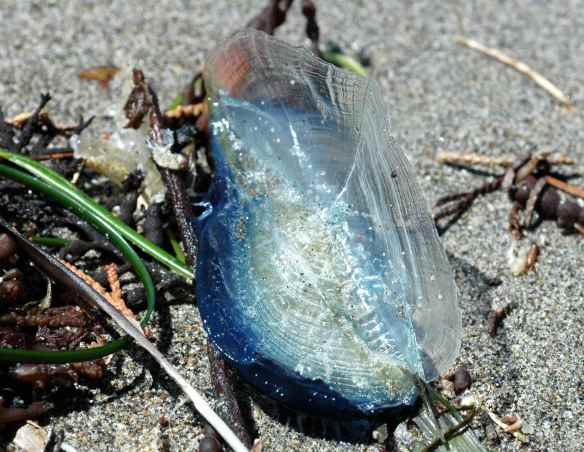 The velella that we found on the beach had, unfortunately, encountered one essential problem with relying on the wind and currents and having no means of independent propulsion: sometimes you go where you don’t want to go. Velella regularly get beached, sometimes in huge numbers.

Long ago, when the Earth was thought to be flat, people imagined that if you sailed to the horizon you could fall off the edge of the world. Now, of course, we know that that isn’t possible. But these velella—haven’t they fallen off the edge of their world? The wind drove them until the water ran out. And over the edge of the world there was sand, and seagulls not deigning to eat them, and some aliens taking their pictures. 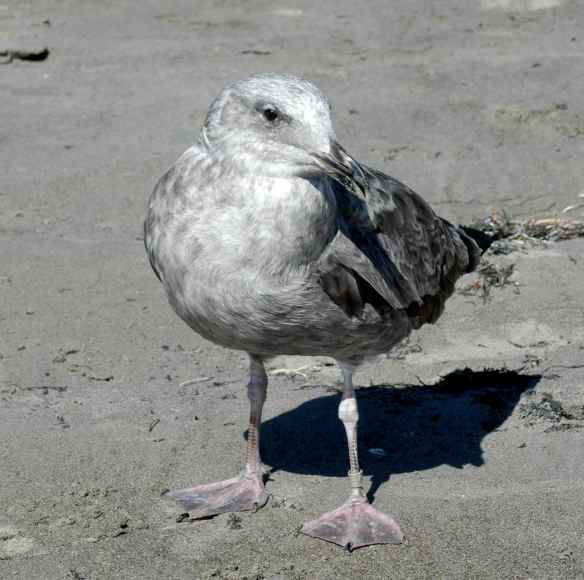 3 thoughts on “Velella velella! Or, falling off the edge of the world”