An already-banded male, ARKM, seemed very upset about this. Sometimes juncos do hang around when we band their mates—it’s rather sweet to see them reunite when the banded birds are released—but ARKM’s behavior seemed different to me, so after we released MABY, I lurked behind a tree and watched.

Sure enough, ARKM went down to the ground: he had a nest.

Inside the nest were four young chicks who I’ve posted about before. They were nice enough to pose for my favorite photo of the field season. 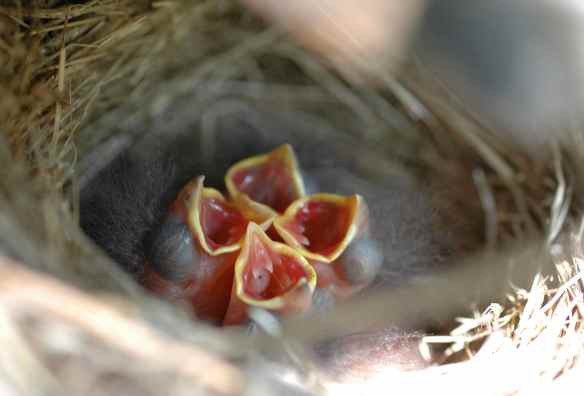 Their nest was built in the bank of a dried-up stream near a campground. It wasn’t especially hidden, and it was in prime Steller’s Jay territory, so I worried that the jays would find it.

The chicks grew. They were inconveniently aged, for us: the optimal age to band them fell right on the three days when we needed to go home to restock on food. We opted to band them a bit early but use just one band per leg, since their young legs were small. 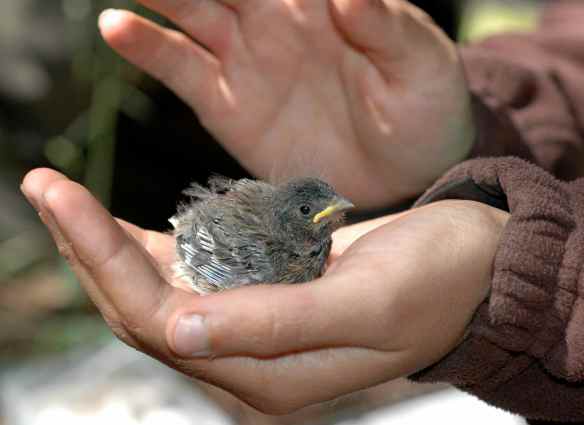 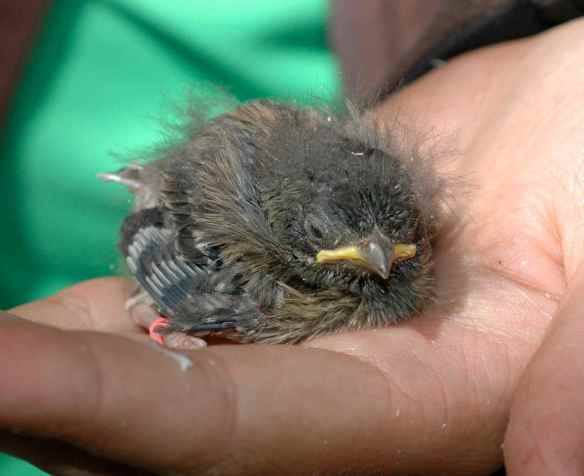 K-A- with lots of pinfeather dandruff.

We put AL, AO, AI, and KA back in their nest and left. I worried more about jays.

Some days later, when we returned, we looked for them. Fledglings are often hard to find: the parents move them into thick brush for safety, and as they get older they may move far from the nest. But ARKM and MABY had made use of some saplings just a few meters from the nest site to stash their chicks, and we saw AL and KA. A few days later we saw AO as well. We watched them over the next few weeks, trying hard to spot all three (and looking for the missing AI, who never materialized). They grew into flighted, long-tailed fledglings—although that didn’t stop them from continuing to demand food from their indulgent parents.

At some point MABY lost her whole tail, either from stress, a strange molting pattern, or a close encounter with a predator. It didn’t seem to slow her down, and I spent a lot of time thinking she was an oddly-colored young fledgling (who lack tails) only to realize again, nope, it’s just MABY.

MABY is a trickster

This was a successful nest. The chicks got through the nesting period unscathed, which is a dangerous time since a predator only has to find the one nest to doom all the chicks. Only AI died in the perilous period between leaving the nest and becoming mobile, while AL, AO, and KA all survived to fly.

That’s great for them and for MABY, but it’s still a bit of a question mark for ARKM, because birds cheat. From a purely evolutionary, genes-are-king perspective, it’s not clear whether this nest was a win or a loss for ARKM. He spent a lot of energy raising these chicks; what if MABY mated with another male too, and some or all of the chicks weren’t ARKM’s biological offspring? He won’t ever know. 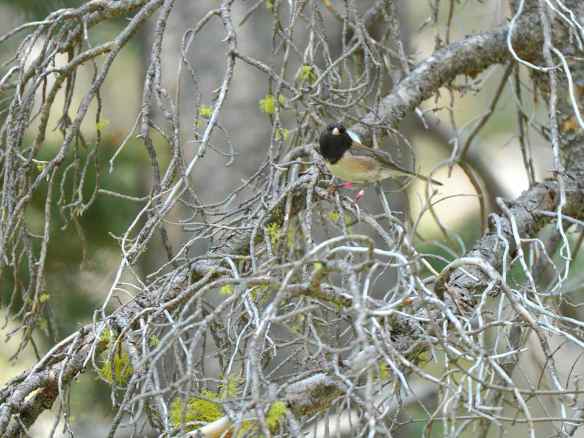 But we will! Because I collected blood from the chicks, MABY, and ARKM, as well as many other males in the area who might potentially have cuckolded ARKM, I can test to see if ARKM or any other male—or none of the sampled males—sired the chicks. And it turns out that all four of the chicks were indeed ARKM’s. MABY was faithful.

Of course it’s ridiculous to use value-loaded words like “faithful” when discussing birds’ sex lives. But I can’t help being a little glad that ARKM’s genes were passed on, after watching him work so hard to feed those big demanding babies. He and MABY were good parents.

1 thought on “What we know about one nest”