I once saw a talk by a scientist who works on jumping spiders—those colorful, fuzzy, big-eyed teddy bears of the spider world—in which the speaker paused, after discussing the spiders’ excellent vision (courtesy of their many eyes, which are of several different types and see in various ways) and their sensitivity to vibrations (which they perceive through their legs and through the many fine hairs covering their body), to wonder, “What does the world feel like to these animals? What is it like to be a jumping spider?”

What is it like to be something other than human? There is so much research touching on this question, studies asking everything from “How does a bee navigate?” to “Are rats kind?” It’s a fascinating question, and it’s incredibly difficult.

It’s so easy to get things wrong. Take the case of the mantis shrimp, a creature whose world must be about as alien to ours as a jumping spider’s would be. The mantis shrimp has enjoyed some popularity lately thanks to an internet comic, and one of its most famed accomplishments is having twelve kinds of photoreceptors in its eyes. Humans only have three, which detect red, green, and blue light; we use those three photoreceptors to perceive all of the colors we see. (Color-blind people are missing one or more kinds of photoreceptor.) Birds have our three photoreceptors, plus a fourth one that lets them see ultraviolet light. 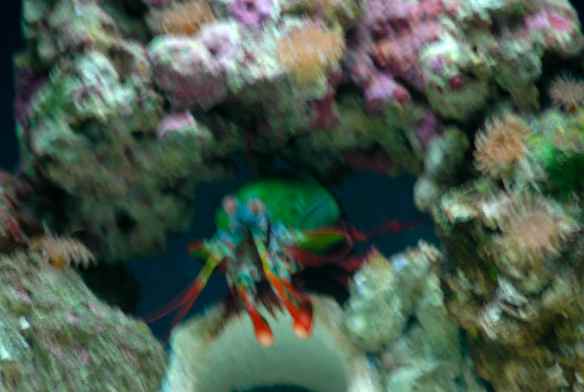 If the mantis shrimp has twelve kinds of photoreceptors, its color vision must be a thing of wonder! It would be our color vision but magnified and improved unimaginably. The mantis shrimp must see a cascade of colors where we see just blue or orange; it must see myriad hues in every shadow.

This fish must look even cooler to a mantis shrimp.

Except it turns out that it doesn’t. If you ask a mantis shrimp to distinguish similar shades of a color, it is worse at it than we are. The mantis shrimp’s vision machinery is much better than ours, but its interpretation of the input is much worse. (There is a nice write-up of this work, with an illustration of the mantis shrimp’s color discrimination abilities, here.) Our ability to count its many photoreceptors didn’t really help us understand what it sees.

…And we still won’t know what it’s like to be non-human. We might know the inputs (sights, smells, senses) and the outputs (what the animal does), but we won’t know what happens in between. To use physics terminology, it’s a black box: an unknown.

What is it like to be an African wild dog?
(Photographed at the Lincoln Park Zoo in Chicago.)

This is true of our fellow humans too, of course. For all you know, I’m a robot that perfectly mimics a sentient being without actually being one. You can’t test this because, well, that’s what “perfectly mimics” means. Most people seem content to give their friends, neighbors, and random strangers the benefit of the doubt on the maybe-you’re-a-robot issue. Too, most people take it as given that we don’t all experience the world in identical ways. Sky diving is one experience for the adrenaline-lover and quite another for the fearer-of-heights. Cilantro is a key garnish or disgusting.

We deal with this variation in humans by substituting our own experiences for others’. We think, “I like cilantro, but if it tasted like soap to me, then I wouldn’t want to eat it; so I’ll leave it out.” We think, “Sky diving is awesome, but if it was as scary to me as spiders are, I would hate it; so I understand.”

There’s a problem when we do this for non-human animals, though: it’s anthropomorphism. At the extreme, anthropomorphism gives you cartoon mice sweeping out their burrows with little brooms. That’s obviously wrong. But is all anthropomorphism wrong? If it is, we’re stuck, because relating back to ourselves is the only way we have to imagine the inner life of another being. If we want to make that imaginative leap at all, we have to do some anthropomorphism.

You could always be wrong. You might think that darkness would be frightening to a stressed-out bird, for example, as humans are often slightly afraid of the dark—but darkness appears to be calming for most birds. Yet you can’t be right; or anyway you can’t know that you’re right. You can’t be human and know for sure what it’s like to be anything else. You can only guess.

You can make educated guesses. You can look at what we know of animal perceptions and animal behavior, and rule some things out: junco parents swooping around you as you band their chicks probably aren’t thinking “Yes, please eat my babies, predator! Huzzah, free at last from parental duties!” You can figure out where you draw the acceptable-anthropomorphism line. Maybe the most you feel comfortable with is physical sensation: looking at a fluffed-up bird in the snow and thinking of the feeling of being cold.

It is worth thinking about where you draw the line, and why. I don’t think it’s possible to not draw it at all. When you interact with animals, you are basing your behavior on something. You walk on the other side of the street so as not to frighten the doe with her fawn; or you lay out poison for the rats without concern for what they will experience; or you worry about what the birds do in cold rain. There is no “neutral,” since you can’t avoid interacting with animals, and you can’t avoid betraying a viewpoint in that interaction.

Barring the extremes (mouse with broomstick), there isn’t exactly a wrong answer, just as we don’t have a way to determine the right answer. You can completely eliminate anthropomorphism if you choose to think of animals as robots, but the elimination of anthropomorphism in this route doesn’t make it more correct; it’s not any more data-supported than the other options.

So go ahead and anthropomorphize… carefully. Always be looking for more information, be ready to move your acceptable-anthropomorphism line when it seems called for, and always be aware of what is based on data and what is just a careful guess. Don’t be intimidated into thinking that the more robot-y opinion is somehow more correct. The opinion that animals don’t feel pain or fear or satisfaction—that they just appear to, but don’t experience it like we do—is not any more scientific than the opinion that they do.

Galah, photographed at the National Aquarium in Baltimore.

6 thoughts on “Anthropomorphism and how we think about animals”