Genetics is complicated. I have taken courses to this effect; I have taught the concept in Introductory Biology. Mendel’s peas with their neat logical Punnett squares were a lucky rarity—each trait governed by just one gene, each of those genes on a separate chromosome. The genetic basis of the vast majority of traits is far more complex. If the genes involved aren’t physically linked (called “linkage disequilibrium”) then they are pleiotropic (influencing many different traits at once), or epistatic (modified by other genes), or simply so subtle that their effects disappear in the noise of environmentally-caused trait variation. Relating traits to genes is hard.

I know this; I understand it; but until recently, I had never actually seen it. Then my pet mice decided to give me an object lesson in genetics.

What happens when you think you have all female mice, but you actually have mostly females and one male?

This happens.
(Unrelatedly: doesn’t this look like a mouse version of the Canadian flag?)

In fact, there were a lot more babies than the ones in that picture. Think of a number that would be a lot of mouse babies, but not so many that you would lose all respect for me and start picturing me as a crazy mouse hoarder: that is how many mouse babies there were.

The father of every baby was my secret sneaker male, Porter.

Porter is also the freelance science mouse from a few weeks ago. I figured that after I supported all of his babies, he owed me that.

One of the mothers was Candy Corn:

Candy Corn nursing some of the babies (not all hers)

If color genetics was simple, you might expect that all of the offspring from these two mice would be orange and white, maybe patchy like Porter or oreo-patterned like Candy Corn. You would expect them to look, in fact, just like two of Candy Corn’s five babies did look: 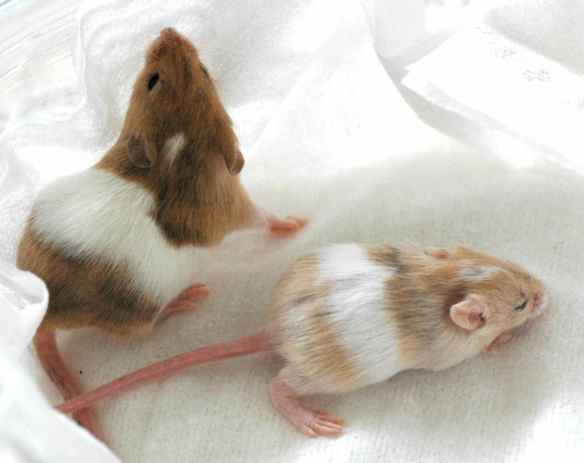 You would not expect the other three babies:

Where does that solid color come from? Why is the middle one speckled black?

Now, there are people who know a lot about mouse genetics—there are mouse geneticists and mouse hobby breeders—who could explain this, pointing out that many genes influence color and interact with each other in complex ways. They could look at these photos and hypothesize genotypes. Mouse color is largely not a mystery. But that is because people have spent years setting up mouse crosses and documenting them. Most genetic work isn’t done with the luxury of that kind of knowledge base. If you didn’t know how mouse color genetics works, wouldn’t the colors of these mice this be a very difficult puzzle?

“Okay,” I hear you say, “but two of the five look like Mom. That’s 40%. Almost half of those babies make sense. Genetics is only 60% complicated.”

Well, then, allow me to show you some more baby mouse pictures!

Here is another mom, Marzipan:

She had seven babies, all of them also sired by (of course) Porter. Porter is patchy orange and white, and Marzipan looks like an oreo cookie, so you might expect that their babies might be various colors: oreo-ish, white, black, orange. Like these two:

But then there are also these:

And yet, despite all that complexity, sometimes papers come out like Weber et al.’s (2013). In that paper they found that the differences in burrow construction between two species of mice were genetic, and that if you hybridized the two species, the hybrids built intermediate-type burrows. Moreover, they managed to locate where on the genome the controlling genes were, and found that burrow length was controlled by one set of genes, while escape-tunnel-building seemed to be controlled by a single other gene. Not only did they manage to link traits to genes, but they managed to do that with traits that were behaviors!

Genetics is complicated, and that makes it all the more satisfying when someone manages to solve part of the puzzle.

1. Domestic mouse coat color is probably not a very good model for most traits. My pet mice come from mice bred to be reptile food (I don’t feed them to anything; but that’s what the pet store breeds them for), so coat color is not under any selection that I know of. Almost any trait in nature would be under selection, so the variation would probably be less than is seen in the colors here.

2. The baby mice are adorable, and the experience has been a lot of intellectual fun for this biologist, but: I do not recommend breeding mice unless you have a very real reason. There are decidedly unpleasant aspects that I will not get into here. And at the end you have a lot of mice, and guess what? Nobody wants to adopt mice. You do not want to have as many mice as I now have.

On that note: if anyone in the Bay Area wants to adopt a mouse, let me know!