On our last trip, finally, we managed to catch some fledglings. We had been seeing them around for weeks, but as they didn’t seem to respond to playback, and they never flew the right direction when we tried to chase them into the net, we’d caught none.

On this last trip something had changed. No longer were all of the fledglings attended by their parents; instead, they formed foraging flocks of parents, attended fledglings, and apparently-independent fledglings. Attended fledglings are hard to catch because their parents lead them away from danger. Independent fledglings, it turns out, aren’t so careful. We set up the net where we observed the flock foraging, and within ten minutes the juncos drifted back into the area and resumed foraging.

BOAR was the first fledgling we caught.

He was molting his head feathers, transitioning from streaky juvenile to adult-looking bird. 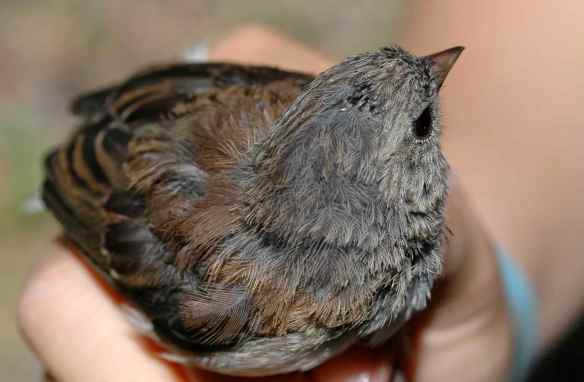 Notice the streakiness in his head and the darkness of his bill: those are both ways that we can tell he is a juvenile.

Not long after we released BOAR, a fledgling flew up and landed on top of our net. Cheeky bird! It just about drove me crazy to see him sitting there, so close to being captured and yet uncapturable. Fortunately for my blood pressure, as soon as he took flight he flew into the net and we got him.

We banded him OORA because that seemed braggy and overconfident—a good name for a bird that would land on a net, then get caught in it.

He hadn’t yet started to molt, so he looks like the standard junco juvenile: tan, streaky, no sharply contrasting colors.

Unfortunately for him, he had feather mites. He was the first bird we’ve caught this summer to have visible feather mites. Feather mites eat feathers; birds defend against them by bathing in water and dust and by preening. Maybe OORA hasn’t learned proper hygiene yet. 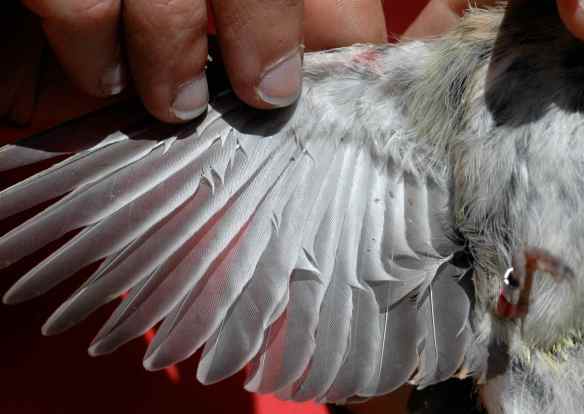 Little tan dots on the second and third wing feathers out from the body are feather mites.

Despite his cockiness and his mites, possibly my favorite junco picture this season is of OORA. 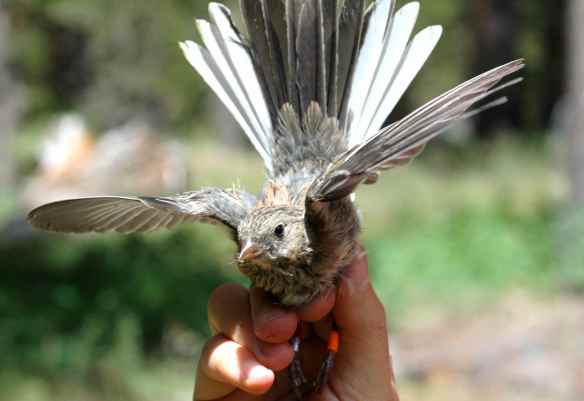 Look at those tail feathers! Juvenile juncos grow their “adult” tail feathers right away, and don’t molt them until the next fall. Those are the tail feathers OORA will use to woo females and compete with males next spring, if he is male.

The last fledgling we caught this trip flew into the net while we were using playback to try to catch an adult male. 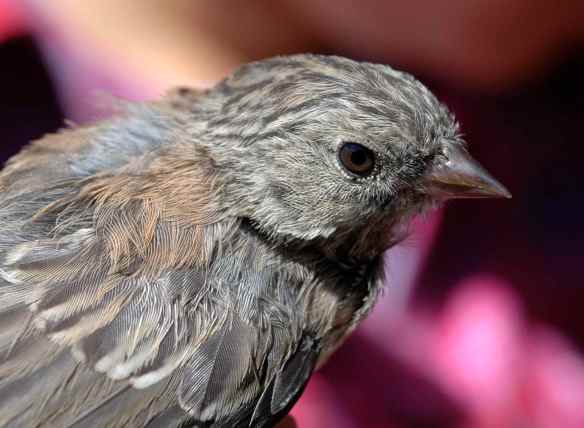